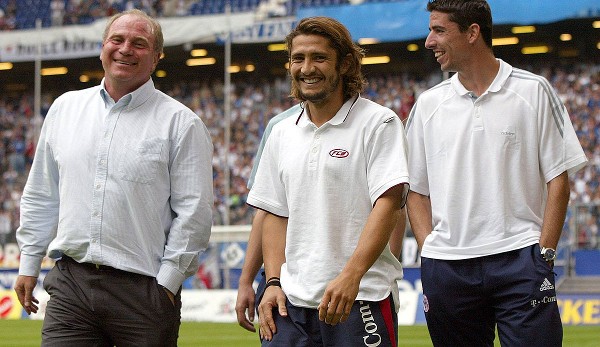 FC Bayern has not been a friend of winter transfers in recent years. A few times, however, the Munich team took a lot of money into their hands. There weren’t always hits.

FCB will probably keep their fingers still this winter. “We have a team that is excellently staffed,” said President Herbert Hainer of the AZ: “We have to make sure that the good players we have all come at game time.”

Sports director Hasan Salihamidzic hit the same score Picture TV: “We’ve done a lot this summer and I think we’re very well prepared for the whole season. We won’t be active in the transfer market in winter.”

It is more likely that the record champions will sign a new center forward next summer. On the one hand, Harry Kane from Tottenham Hotspur has been under discussion for a long time, but Eric Maxim Choupo-Moting is also in top form at the moment. A contract extension is not unlikely. But enough of the present! Who has been drawn to Munich in the past?

SPOX looks back on FCB’s winter transfers in the 2000s.

The Frenchman arrived on a free transfer from Olympique Marseille in the winter of 2004/05. Grade: 2.

After seven successful years, Bixente Lizarazu left FC Bayern for Olympique Marseille in 2004. But there was pure chaos after Didier Drogba’s departure. He came back just six months later.

For the return he called Uli Hoeneß: “I told him I had three options: quit football, kick OM coach Philippe Troussier’s ass or come back to Bayern.” Bayern agreed, Liza won four more titles and stopped in 2006.

He was brought in as a possible successor to Michael Ballack and even got Spanish citizenship for a short time because Bayern had too many non-EU foreigners. But Julio dos Santos completely flopped.

The playmaker, who was said goodbye to Paraguay in tears, only played five times in the Bundesliga, was loaned out several times and finally ended his career in autumn 2022.

A sad chapter in the history of FC Bayern: Breno was all over Europe. FC Bayern made the race for the 18-year-old. But he was never able to assert himself. Also because of various injuries and adjustment problems.

In 2011, Breno burned down his villa in Munich under the influence of alcohol, had to go to prison and returned to Brazil. His active career was over in 2021, but he is happy with his family and is full of life. That’s the most important.

Donovan came to FC Bayern from the MLS as Jürgen Klinsmann’s dream player. Hermann Gerland would later say that the offensive player wasn’t even suitable for the reserve team.

The loan was planned until March 15th, Bayern broke it off on March 8th. Record holder in the USA, a Klinsi flop in Munich.

The transfer unleashed an avalanche: Because Hoffenheim sold the Brazilian behind Ralf Rangnick’s back, the maker of Hoffenheim’s promotion to the Bundesliga resigned immediately.

He played exactly 100 competitive games for Bayern, played in defensive midfield, left back and in the center and knew how to convince. When Pep Guardiola arrived, Luiz Gustavo’s farewell was sealed. It went to Wolfsburg for 16 million euros.

Because Bayern Jérôme Boateng, Medhi Benatia and Javi Martínez were injured, Bayern had to react and brought in Serdar Tasci at short notice.

He played 220 minutes for Bayern, was often not even in the squad and left again in the summer. During his stay in Munich he said: “If I had known that I would not play, I would not have done it.”

Wagner fulfilled his wish to play at a professional level for his favorite club FC Bayern. He knew that he would only be the backup for Robert Lewandowski and accepted anyway. He performed the role well (11 goals in 38 games).

Almost exactly a year later he received a crazy offer from China and accepted. Wagner’s reasoning: “Ultimately, in addition to fun and sporting success, the bank account is also important in a career, I think.” Now a trainer and TV expert in Germany.

The Canadian came from Vancouver in the winter of 2018/19 for ten million euros. Note 1.

Initially brought in as a left winger and used in the second team in this position, Niko Kovac made him a left-back. Hansi Flick took over the idea from his predecessor.

Today Davies is one of the best full-backs in the world and actually irreplaceable at Bayern. Bayern have already extended the contract of the best winter transfer in recent history until 2025.

The Spaniard arrived on loan from Real Madrid in the winter of 2019/20. grade: 5

Odriozola was one of the attempts to solve the problem area at right-back. But he only played 179 minutes in five appearances at FC Bayern. The flight to Munich and the medical check took longer.

After all, he was in the squad when Bayern won the 2020 Champions League. Afterwards Odriozola said that he was happy to have switched to Munich because he could learn a lot from the mentality. Last loaned to Florence, now back at Real.