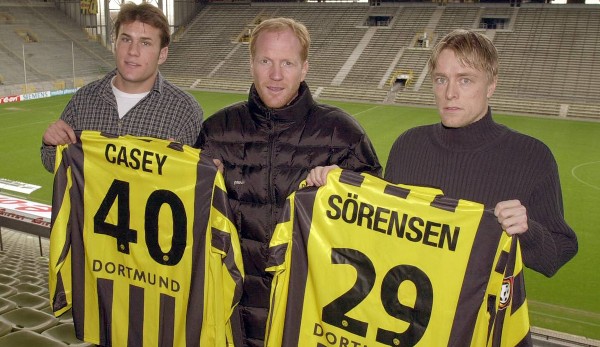 Borussia Dortmund has several names on the list for the upcoming winter transfer period. We look back on the past and look at how BVB’s winter transfers have fared so far.

With Mohamed Kudus (Ajax Amsterdam), Ramy Bensebaini (Borussia Mönchengladbach) and Daichi Kamada (Eintracht Frankfurt), there are three players who should be on Dortmund’s winter wish list. But black and yellow want to part with some legacy issues. You can get a more detailed overview here.

On this occasion, however, we look back to the current millennium. How have BVB’s winter transfers fared since 2000? SPOX makes the check.

The second American in BVB history came to Dortmund at the age of 19 and did not play with the pros. For the second, however, he scored 14 goals in 23 games. Then went to Hanover, where he was promoted in 2002. Later still active for Mainz and KSC.

Made his pro debut aged 17 in October 2000 and became a champion in 2002 by formally making the pro squad. Also with an assignment for Germany’s “Team 2006”. Played for ten clubs.

Had previously also signed at 1860 – Dortmund eventually had to pay to the lions. At BVB actually without a hit, then it went back to Norway. Until 2021 coach of Baerum SK.

One of BVB’s best transfers in the new millennium. “Schnitzel” won the championship title in 2002. Joined Arsenal in 2006, won two FA Cups there and stayed for ten years before retiring at hometown club Sparta Prague in 2017. Today he is sports director there.

Perhaps the best BVB transfer of the millennium. Came after a long transfer posse with FC Bayern. End of career in 2015 after numerous successes and titles, was captain for six years and lived through the successful Klopp era. Later an expert on ZDF, from 2018 to 2022 head of the licensed player department at BVB, now Zorc’s successor and the strong man at BVB. An absolute legend in black and yellow.

Didn’t complete a competitive game for the pros. Left BVB in 2005 for MLS. Played alongside greats like Donovan at LA Galaxy but only made three brief appearances. Back in Brazil since 2009.

After all, delivered 25 booths in 81 BL games in a difficult sporting time. Unforgettable is his celebration on the fence of the south stand in the derby win against Schalke in 2007. President of the Polish Association of Contract Footballers since 2019.

Came from Arnhem with a recommendation of 66 goals in 190 games. However, “Klinsmann”, as he was known for his header goals in Ghana, was never able to assert himself. In 17 Bundesliga games without a goal for BVB.

The keeper came on as a backup at 19 and made five games for the first team until 2010. In contrast, he was in goal 66 times for the U23s. Then it went to Union. Today works as a goalkeeping coach at Chemnitzer FC.

After Rosicky and Kehl, the next absolute BVB legend to come in a winter transfer window. Was first loaned out until June 2009 and then came to Dortmund for 4.2 million. Became two-time champion and cup winner in the Klopp era, then went back to Bayern. Back again since 2019. With the current third-most appearances in BVB history.

The keeper was number 2 behind Marc Ziegler after Roman Weidenfeller was injured. When Ziegler was injured in the Revierderby against Schalke 04, Bade came on at half-time. That was his only mission for Dortmund.

Was in the cup final shortly after his move with BVB, where he played 79 minutes at right-back but lost to Bayern. A total of 25 competitive games. In February 2009 he moved on to 1860.

During this time he played against half-brother Jérôme for the first time. Saw red after a kick and therefore only played eleven competitive games. BVB then wanted to buy him, but could not meet the Spurs demands. Ends what is undoubtedly a great and eventful career at Hertha.

Was considered a great talent, but he couldn’t take the next step in Dortmund. Was under contract for five years, but was also loaned out to FC Augsburg and VfB Stuttgart. Often only came from the bench for Dortmund. Played for Lazio, Augsburg, Norwich and Zurich, now without a club.

After the 2011 championship he went to Real. It was difficult for him there, so he went on loan to Liverpool. It didn’t get any better there either, so he moved back to Dortmund. He couldn’t find his form from back then. At Antalyaspor since 2021, first as a coach, then as a football department head.

After injuries to central defenders Hummels and Subotic, Friedrich came out without a club in November and made his debut against Bayern three days later. After 15 competitive games (one goal, two assists) he went to India.

Came as a player from the first half of the season in Serbia (6 goals, 7 assists) and was supposed to compensate for the serious injury in Cuba (torn cruciate ligament) at BVB. Scored 17 seconds after coming on in debut but then flopped. Transferred to Cologne after a year and a half. Without a club since summer 2022.

Completely flopped at BVB, also because he was mostly deployed on the wing instead of in the center. At least 19 games, but mostly in or out. Then it went via Leverkusen to RB Leipzig, where he was an absolute top performer for many years.

Hailed as the ‘new Ibrahimovic’ when BVB won the bid. The then 17-year-old was in demand across Europe, but in Westphalia he did not ignite under four different coaches. Didn’t score a single Bundesliga goal in black and yellow. A loan to Willem II turned his fortune.

In the Eredivisie he hit completely, then transferred from BVB to Real Sociedad for 15 million euros, where he also hit completely. After 44 goals in 131 games, switched to Newcastle United in the summer of 2022 for 70(!) million euros. This is possibly the biggest transfer error in BVB history.

Came up a strong nine goals and one assist in 14 competitive games after Aubameyang’s departure. An injury late in the half and demands from Chelsea then thwarted any plans to sign the player on a permanent basis. Batshuayi started an odyssey, changing clubs practically every year and then opening at Fenerbahce in 2022.

Was first used in the substructure. Celebrated his BL debut under interim coach Stöger, but a year and a half later he was loaned out to Huesca. In the summer of 2021 we went to Anderlecht. Very strong there as a left-back with an offensive urge – and so Manchester City struck in the summer of 2022.

Was good from the start but fell into a hole later and was out of control at times under Lucien Favre. But very stable and reliable throughout 2021. Became a real top performer, then was sold to Manchester City.

A purchase that was difficult to make sense of. Was mainly used at BVB II, above it was probably found too light. In his ultimately only eight competitive games not always saddle-proof. Then sold to Marseille at a loss of €4.5m.

Since his alternation with light and shadow. His attitude helps the team, but Can regularly makes mistakes that lead to goals. Struggles to this day to become the undisputed regular player. Also often injured.

what to say Dortmund’s best winter transfer so far by a mile away. Left the club in summer 2022 after scoring 86 goals and 23 assists in 89 competitive games. Without him, the Dortmund attack promptly became much duller.