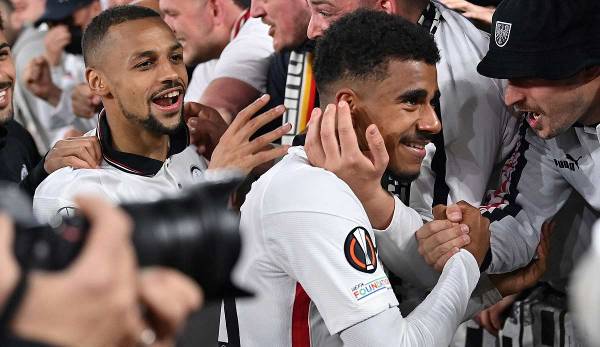 Ansgar Knauff will probably not return to BVB early in the summer. Stefan Effenberg sees the danger that RB Leipzig will overtake Borussia Dortmund. Current news and rumors about BVB can be found here.

Due to Ansgar Knauff’s recent strong performances for Eintracht Frankfurt, there were rumors that BVB could bring him back to Dortmund early.

According to information from sports1 the 20-year-old will fulfill his loan contract with SGE. The winger was loaned out by BVB to Frankfurt for 18 months in the winter and will most likely play there for SBU until at least summer 2023.

A move to another club is out of the question this year. Knauff wants to develop further at Eintracht and initially confirm the positive first impressions.

In the 2-1 win in the first leg of the Europa League semifinals against West Ham, the U21 international scored the important 1-0 with a header. Rumors that BVB could rethink squad planning and bring him back persisted.

Stefan Effenberg believes that RB Leipzig will overtake BVB in the future. If the Saxons “hadn’t had this phase of weakness at the beginning of the season under Jesse Marsch, then they would have been Bayern’s number 1 hunter,” wrote the expert in his column for sports1: “And that’s what they will be for me in the future, not Borussia Dortmund.”

Above all, the many goals conceded would be responsible for the fact that Dortmund is not more constant. “BVB always celebrates a spectacle because of the offensive, but you win championships with a stable defense,” analyzed the former Champions League winner. Marco Rose has an offensive philosophy, but concedes too many goals with it.

“He puts his finger in the wound, but Rose has himself to blame for it. There are too many individual mistakes,” explained Effenberg. BVB have conceded 50 goals in the Bundesliga this season.