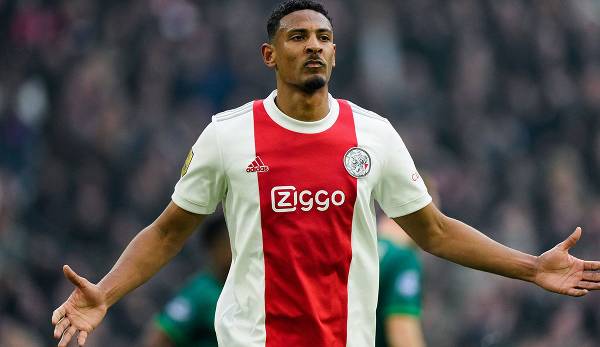 In the search for a successor to Erling Haaland, Sebastien Haller has apparently become the focus of Borussia Dortmund. The black and yellow have probably signed the 15-year-old goalkeeper Gustav Aabro. And the move from goalscorer Erling Haaland from BVB to Manchester City is almost fixed. You can find all the news and rumors about BVB here.

Borussia Dortmund has apparently identified Sebastien Haller from Ajax Amsterdam as a possible replacement for Erling Haaland. That reports the WAZ. Due to his Bundesliga experience at Eintracht Frankfurt, where Haller stormed from 2017 to 2019, the attacker would be suitable immediate help.

Even before he switched to West Ham United for 50 million euros in the summer of 2019, Haller was said to have become the focus of Dortmund, but at that time a transfer was not possible from a financial point of view. According to WAZ BVB now has better chances of being able to pay and sign the 27-year-old, who is still tied to Ajax until 2025.

Haaland’s upcoming departure from Manchester City expands Dortmund’s scope for action. The Norwegian can leave BVB by clause for a fee of 75 million euros.

Haller has meanwhile also been traded at FC Bayern Munich as a possible successor to Robert Lewandowski.

Borussia Dortmund has apparently secured the services of Danish goalkeeping talent Gustav Aabro. In any case, the 15-year-old keeper already presented himself on his Instagram with his new employer’s jersey.

“I’m happy to join this amazing club,” he wrote. He also added the hashtag 2025, apparently as a reference to the contract period. According to Ruhr news the photo was taken during a visit to the training ground in Brackel. However, the post has since been deleted.

Aabro is currently still active in the youth of the Danish club Lyngby BK. For the new season, he should possibly be between the posts at Dortmund. The Danish keeper would initially be intended for the U17s.

The move from top scorer Erling Haaland from BVB to Manchester City has been in the pipeline for a long time, only official confirmation is still pending. According to media reports, the Norwegian completed the medical check in Belgium on Monday.

“In the end a decision was made. Erling Haaland will play for Manchester City next season,” wrote Haaland confidant Jan-Aage Fjörtoft on Twitter. Dortmund released Haaland on Monday to “settle personal matters,” as the club announced.

The 21-year-old, whose contract with BVB runs until 2024, can leave the black and yellow with an exit clause of 75 million euros. On Sunday, Dortmund’s future sports director Sebastian Kehl indicated that Haaland would be leaving. He expects “clarification in the next week. I wouldn’t be surprised if he moves on in the end,” said Kehl Sport1 double pass.

National player Karim Adeyemi is to switch from Red Bull Salzburg to Dortmund as a successor. This transfer could also take place later this week.

According to his own statement, the former Dortmund star Nuri Sahin can imagine an engagement with his former club in the future. “I’ve never made a secret of the fact that Borussia Dortmund is an affair of the heart for me and that I dream of celebrating a victory in front of the south stand as a coach,” said Sahin dem table football. “When I left BVB and went to Bremen, I sat at home with my wife in the evening and said to her: ‘I think I’ll have what it takes to coach this club at some point.'”

The 33-year-old currently works as a coach for the Turkish first division club Antalyaspor. His former coach Jürgen Klopp encouraged him to pursue a coaching career. “He said: ‘Nuri, you’re a good person. You’ll make it,'” explained Sahin.

The midfielder was trained in BVB’s youth and played a total of 274 games (26 goals, 49 assists) for Dortmund. In his career, Sahin also played for Real Madrid, Liverpool FC and Werder Bremen, among others.