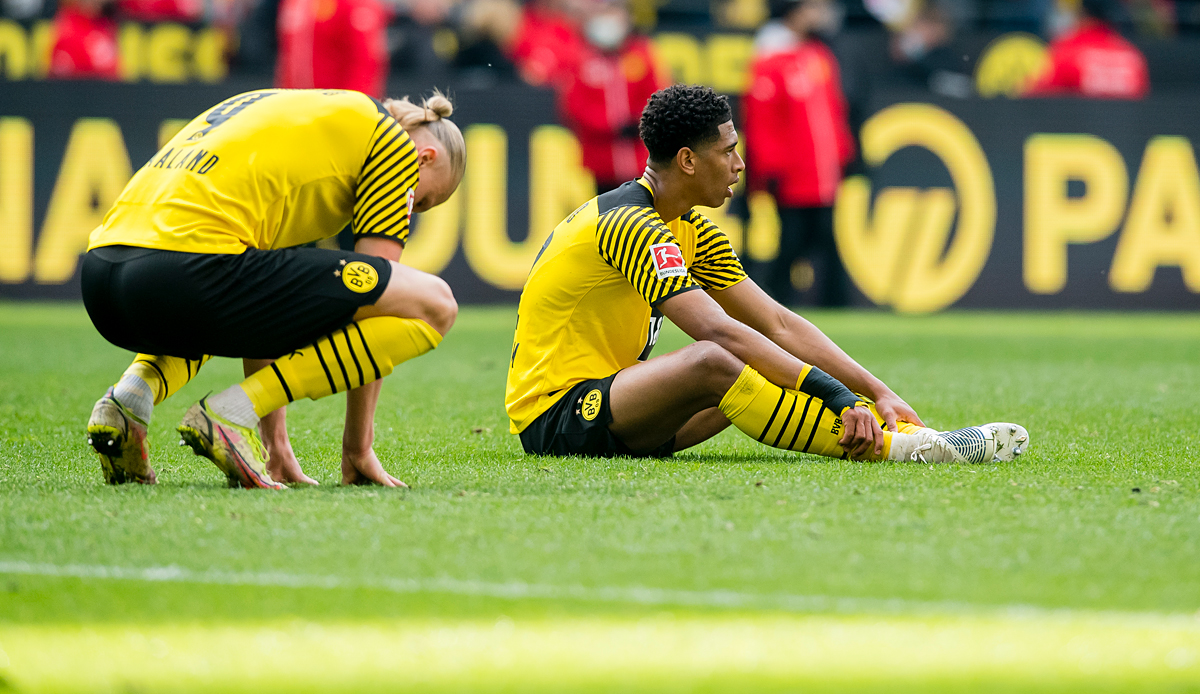 Dortmund’s runner-up position will probably no longer be in danger even after the nasty bankruptcy in the Revierderby, and entry into the Champions League has long been secured. However, black and yellow are not really happy about the course of this season. The goals of the club and the dreams of its fans can hardly be reconciled at the moment.

Six lonely Dortmund supporters held out until the bitter end in the south stand. Three quarters of an hour after the end of the game, they were still marveling at VfL Bochum’s wild, never-ending celebrations in the former Westfalenstadion.

Perhaps there was also melancholy among the steadfast Borussia to be able to celebrate a real goal together. And be it “just” staying up in the league. The guests had secured that early with the 4:3 victory in the Revierderby.

In the crunch time of the season, the black and yellow community is painfully reminded of the emotional power football can have. They have to let themselves be mocked in their own stadium by the supposedly small area neighbors: “We’re number one in the pot.”

Although that’s not true, of course, given that VfL are nine places behind in the table. Even arch-rivals Schalke 04, who are lower in the class, kindle a lot more fire in their own camp: with 10,000 travel crazy people on an away tour in Sandhausen! The fact that royal blue is “only” about the 2nd league at the moment is completely irrelevant in view of the force that the crazy promotion finish around the other B1 neighbors, who have been tested, is currently sparking.

Last but not least, the black and yellow community has been looking towards Frankfurt with respect – and maybe a pinch of envy – for a long time. These experiences and pictures, the closeness between fans and players, the Camp Nou in Barcelona bathed in Eintracht Weiß reminds many Borussia: “That’s exactly how we were a few years ago”: At BVB’s legendary away game at Man City in autumn 2012. With the fan march in London before the duel with Arsenal.

There is a great longing to conquer Europe in this way again instead of being humiliated twice by Ajax or even being distanced at home by the Rangers – in terms of sport and acoustics.

BVB seems trapped in its own model of success. The Westphalians are not good enough to cancel the title subscription to FC Bayern. But usually too good to miss the European competition. The absolute passion as an elementary part of the club’s DNA threatens to disappear.

Less than 100 percent is usually enough to achieve the minimum goal. If necessary, an energetic final sprint like last season is aimed at securing the lucrative premier class. This is usually worth a good 50 million euros and gives BVB a head start over most of their league competitors.

Grades: Haaland is not enough – with this central defense…

At the end of this season, Dortmund will probably adorn themselves with the title of runners-up for the sixth time since Munich’s permanent hegemony began in 2013 and still – like schizophrenics – have alienated a number of loyal fans.

BVB has lost its own game philosophy, it’s constantly going from upheaval to upheaval. Tuchel should provide modern tactical alternatives, Bosz attacking rolls. Stöger had to repair, Favre had to consolidate first, then suddenly attack at the top. With Marco Rose, the return to raid football was planned.

Sometimes cheeky young stars should help, sometimes veterans. Bilious mentality players are always in demand, because a lack of attitude remains a loyal companion, even if the problem is often veiled in language – currently at BVB it’s called “attitude question”.

The direction remains unclear, the search for it the only constant. Dortmund’s story is also reaching its limit. The role as an instantaneous heater for Europe’s top talent is actually not a bad one, but when the dwell time of the future superstars becomes shorter and shorter, the bond suffers as well.

BVB: You must be Eleven Jew Bellinghams!

As with Erling Haaland: Everyone at BVB enjoyed seeing this elemental force of an exceptional player in the black and yellow jersey. But for weeks everyone has been annoyed by the Norwegian’s gradual farewell.

Not only hardcore fans would even accept a hard fight for fifth place or below – BVB fought it again with a sympathetic gang of rascals or with eleven Jude Bellinghams – the new gold standard for everyone who sticks with Borussia. With the promise of a lot of passion and the return to the marketing promise “real love”.

The upheaval under Rose has not yet gained momentum either. The incredible bad luck with injuries is part of the explanation. But even the coach doesn’t want to accept that as the sole justification. BVB football is too seldom spectacular, at times even very heavy fare. In any case, the fun factor is kept within narrow limits.

Rose recently admitted very openly that he had not sparked the hoped-for euphoria about his new club. The far too early end in the cup competitions cost affection. The hearty home defeats in the league against Leverkusen and the hated RB Leipzig were more than sobering. After the embarrassment against Bochum there was even a whistle and many middle fingers for their own darlings.

The return to the wild ball hunt of the Klopp brand takes a lot of time, the future sports director Sebastian Kehl has already asked for several seasons of patience. But the black and yellow community would probably not have complained about something clearer and earlier visible approaches. Especially defensively, the basis for this type of football.

So far, however, Rose has continued the terrible club tradition: For the sixth year in a row, Borussia have conceded 40 or more goals. Too much for a top team, certainly for a designated runner-up. After four goals against Bochum, BVB has now reached 50 (!) – although the team even got a real upgrade in goalkeeping with Gregor Kobel.

“The core issue is clear,” said coach Rose after the derby – again – and gave a hint for the next season from a sporting point of view. In defense and in front of it, most of the work is still needed.

The problem has been addressed, the first transfers and rumors of transfers indicate that in Niklas Süle from FC Bayern and, in all probability, Nico Schlotterbeck from SC Freiburg, Dortmund would get a central defense of international format. The intriguing question remains whether Borussia also buys fresh passion in addition to sporting class.

BVB: Own offspring a glimmer of hope

At least some top talents from the club’s successful U19 team are now getting their chance, such as full-back Tom Rothe or wing dribbler Jamie Bynoe-Gittens. There are good reasons why they are only collecting playing times now, in the sportingly insignificant season finish.

The youngsters should be carefully introduced to the task. But: They are forgiven for mistakes, they are a source of sympathy and hope: There are already indications that they could have been a key to strengthening the bond between fans and team earlier.

Bundesliga: Table after the 32nd matchday