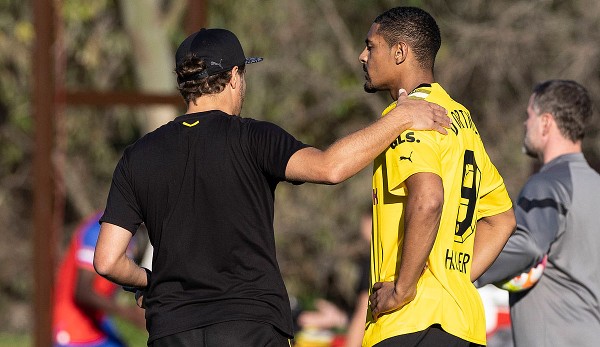 Edin Terzic is happy about the quality of Sébastien Haller. The coach also gives an update on BVB’s injuries. Bastian Schweinsteiger sees Jude Bellingham as the best international youngster.

Edin Terzic was delighted with Sébastien Haller’s successful comeback in the 6-0 win in the friendly against FC Basel. “You could see how good it was for him to convert the penalty. The boys were happy for him when he scored the first goal. That often makes things feel easier on the pitch,” said the BVB coach the game.

Above all, the class of the Ivorian puts the 40-year-old in a positive mood. “You could see the quality he has in the opponent’s penalty area. In order for him to get into this position, we decided to work on the set pieces. Today we played against a cover and made a really good block, so Sebastien was also very free for this contact. But this contact was of course extraordinary,” said Terzic enthusiastically.

Haller scored a hat-trick against Basel – and that as a substitute. The 28-year-old needed less than eight minutes for his three goals. The striker made his debut three days earlier against Düsseldorf after surviving cancer.

Haller feels prepared for the first competitive game against Augsburg on January 22: “Every day I train step by step towards full fitness. I hope that I can continue to help the team.” Maybe also in the starting XI? “The decision is up to the coach. He’s the boss. Of course, the medical department is also following my situation closely.”

Edin Terzic also commented on the condition of the current injuries at Borussia Dortmund. “We still have to wait and see about Thomas Meunier. There will be a final investigation tonight, then we will know more,” he was unable to present any news in the case of the right-back.

However, there was an update on the other side of the defense. “It was a precautionary measure for Rapha Guerreiro. He wasn’t supposed to be doing everything in training yesterday. But then he signaled that he felt a pain that was too risky for next week. We hope to get him back in action next week and can be available to us,” said the trainer, cautiously optimistic.

Meunier injured his thigh at the training camp in Marbella. Guerreiro has back problems.

For Bastian Schweinsteiger, the best international youngster of 2023 is Jude Bellingham. After a moment’s thought, the 38-year-old named the Englishman when asked the relevant question in a video on his Instagram-Account.

The 2016 world champion had to take criticism in the comments of Bayern fans. For some supporters, Jamal Musiala would have been the fitting answer for a former Bayern player. The Munich team wins the Champions League and the Bundesliga for the “Oracle Schweinsteiger”. All Bayern fans would probably agree with that.

Borussia Dortmund’s second team meets SpVgg Bayreuth in the 3rd division on Sunday at 2 p.m. Upper Franconia are currently at the bottom of the table with 13 points. However, only five points separate BVB II from last place. Standing in 15th place, the black and yellow could use a win.