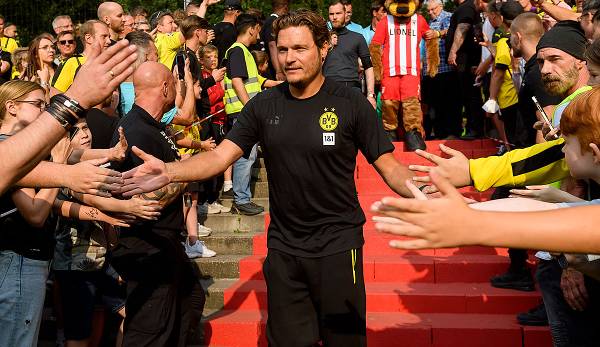 After Borussia Dortmund’s test match at Dynamo Dresden, coach Edin Terzic is satisfied, but also sees a need to catch up. The squad is almost complete since Saturday. And: Dortmund apparently blocked several inquiries about Giovanni Reyna. Here you can find news and rumors about BVB.

BVB won their test match at third division Dynamo Dresden 2-0 on Saturday. Mats Hummels (14′) and Antonios Papadopoulos (41′) scored. Coach Edin Terzic was then satisfied with the performance of his team.

“A day of preparation can’t be better than today: great game, great opponents, great atmosphere,” said the 39-year-old: “After ten days of hard work, there are of course still one or two mistakes. But people are expecting BVB football – we wanted to show that.”

And Terzic continues: “We want to find out: Which of the boys is ready? Who can we count on? Who can we maybe rely on in September and October when things get tight?”

The game in Dresden was the second friendly for Dortmund. At the start there was a 3-1 victory at the Westphalian league club Lüner SV.

On Saturday, ten days after the start of preparations, the national players and thus the most important newcomers to BVB started training. Nico Schlotterbeck, Niklas Süle, Karim Adeyemi and Sebastien Haller are now with the team.

“It’s nice when you’re finally complete. Time is running out. It’s now almost three weeks until we start our first competitive game. Of course we want to make the best use of it,” said Terzic.

Dortmund will play their third friendly on Thursday. The opponent is then the third division club SC Verl. Then it goes to Switzerland to the training camp in Bad Ragaz.

Borussia Dortmund will apparently not lend offensive player Giovanni Reyna to another club. This is reported by Fabrizio Romano.

According to the transfer expert, numerous clubs are said to have asked BVB about a loan from Reyna. However, Dortmund always refused.

Reyna was only able to play twelve competitive games last season due to injuries. First, the 19-year-old American was out from September to February, then in early April he was injured again and was out for the rest of the season.

The good news: Reyna joined the BVB squad on Sunday and completed the obligatory performance tests.

Borussia Dortmund’s former managing director Michael Meier is full of praise for his former club, but sees BVB at a clear disadvantage compared to Bayern Munich.

And that is mainly due to one thing: “It has to do with money if you can keep players like Neuer, Kimmich, Müller and Lewandowski for years in order to form an axis with them and then introduce young players,” said the Westphalian in an interview with Sportradio Germany.