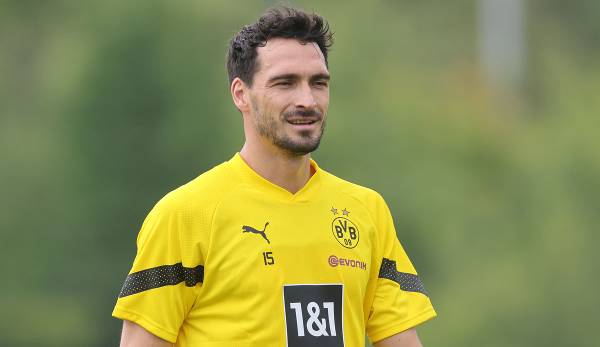 Mats Hummels thinks Borussia Dortmund’s transfer offensive is right and is already dealing with the end of his career. Youssoufa Moukoko’s future is apparently still open. All news and rumors about BVB at a glance.

Click here for the reports about BVB from the previous day

BVB, News: Hummels not surprised by the transfer offensive

Mats Hummels is not really surprised by BVB’s transfer offensive. “No, not really,” he replied in an interview with the Ruhr news to a corresponding question and explained: “Sebastian Kehl, as the new sports director, has also experienced the past few years. And from that it was understandable that something had to happen.”

Accordingly, there was “not the maximum climate conducive to success in all areas” at Borussia. BVB has signed five players in Karim Adeyemi, Niklas Süle, Nico Schlotterbeck, Salih Özcan and Sebastien Haller.

Due to the commitments of Süle and Schlotterbeck, the defense chief, who was undisputed in the past, has significantly more competition in central defence.

“I said earlier, when I was called defense chief, that there really isn’t anything like that for me, but that a defensive network has to act and communicate together. But of course, the fight for the place is definitely like that for me Big as not for a very long time – like in my early days with the national team, “explained the 33-year-old and added: “But that’s – again – quite a nice thing and nothing that makes me frown now. But rather what I have puts a smile on your face.”

In the direction of his critics, according to whom he must primarily sit on the bench in the future, Hummels said with a wink: “Oh, you know, many have been wondering for 16 years how I manage to play at the level.”

And further: “Then they can also omit about it. That’s not meant to be as harsh as it may sound, but: The opinion of experts is sometimes extremely irrelevant. At least for me, maybe not for others. I think You can only really appreciate what someone is doing if you experience it every day.”

In contrast to the activity on the transfer market, Hummels surprised Marco Rose’s split. “This development came completely out of nowhere for me. I hadn’t heard any opinion in this direction before, neither on the board level nor in any way in the team,” he said.

Due to a trip to the USA, he hadn’t noticed that there would be a change on the coaching bench, says Hummels: “When I called back I was told personally, but I had read it online beforehand and was more than surprised. I had already made it known: I have a high opinion of Marco as a person and as a coach, and that will remain so. I just hope that he can show what a great coach he is, whenever and wherever.”

Hummels speculated about the reasons for the separation: “I don’t think it didn’t fit. We just weren’t successful enough. But that was also due to things that Marco Rose can’t do anything about. He has half the season without Erling Haaland have to play half without me, the whole season without Gio Reyna and a few others. Logically, as a coach, your hands are tied somewhere.”

BVB, News: Hummels talks about the end of his career

Mats Hummels is keeping all options open when his contract with Borussia Dortmund expires next summer. “Of course” he is concerned with the right time to end his career, said the 2014 world champion in an interview with the Ruhr news: “But I will decide that spontaneously.”

BVB, News: Hummels about freaking out in training

Mats Hummels has commented on his outburst in training. “I found the situation just too tough. The boys are motivated, want to go, but in a duel they sometimes have to look at what is appropriate in training and what is not,” he told the Ruhr news.

Hummels was upset in Bad Ragaz, Switzerland, after 17-year-old talent Abdoulaye Kamara hit him in the shin.

In the meantime, however, “everything is okay again,” said Hummels and also confirmed the pictures that showed the central defender in a good mood shortly after the foul. “When you’re in pain, you know it: Then you swear to yourself for a moment,” he added.

Hummels continues: “I felt a little something on my shin, but that was forgotten after a short time.”

Youssoufa Moukoko’s future is apparently still unclear. According to that table football it is still possible that he will leave Borussia Dortmund this summer.

Moukoko is said to be plagued by farewell thoughts after a disappointing season under Marco Rose. Dortmund, on the other hand, definitely wants to extend its contract, which runs until 2023.

However, there is currently much to suggest that Moukoko will have more playing time in the coming season. On the one hand, coach Edin Terzic, who regularly used Moukoko in his first term, thinks highly of him and, on the other hand, Sebastien Haller, the number one striker, is out for the time being after his shock diagnosis. You can read more about this here.

Moukoko could have more competition besides Haller. As the picture reports, BVB are being offered numerous strikers as Haller replacements these days. As sky and sports1 report, Luis Suarez was among them.

However, it cannot be assumed that Dortmund will act on the transfer market until there is clarity about Haller’s downtime. This should be expected within the next week.