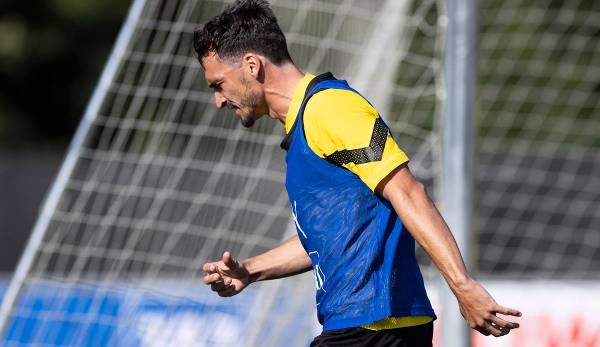 Mats Hummels freaked out in the BVB training camp. Marco Reus is far from thinking about ending his career. All news and rumors about Borussia Dortmund at a glance.

BVB, News: Hummels with an outburst in training

Mats Hummels lost his composure at Borussia Dortmund’s training camp in Bad Ragaz, Switzerland, and raged loudly. The trigger: the 17-year-old talent Abdoulaye Kamara went overboard in a tackle and hit the defender in the shin.

Then Hummels scolded loudly picture limping: “My face, how are you all getting in, you idiots!” Shortly thereafter, according to information from sports1 to the coaching team and added angrily: “They’re crazy, hey! How they get into the duels.”

The 33-year-old then sat on the edge of the field and was treated. A few minutes later, Hummels went on again.

The anger is said to have disappeared quickly, after the unit Hummels was in a good mood again with his teammates.

Hummels will have to stretch himself in the coming season to keep his regular place. With Nico Schlotterbeck and Niklas Süle, BVB has signed two potential regular players for central defence. The former national player does not shy away from competition.

“I’m really keen and have made good use of the last five weeks,” said Hummels recently sky: “It was the longest holiday of my life. I’m going into the season fit and I know how valuable that is.”

BVB, News: Marco Reus does not think about the end of his career

Marco Reus has commented on his future. “I’ve already said everything about a contract extension,” said the Borussia Dortmund captain on Saturday at a media round, adding: “I’m happy to be with the team. You’ll see everything else over the course of the season. Let’s wait just give it a go. I’ll be well prepared.”

The 33-year-old’s contract expires after the coming season. As sports1 reported, there are currently no talks with BVB about extending the working paper.

According to reports, the national player currently earns twelve million euros a year. According to information from picture could he get a performance-related contract in the future.

In any case, the end of a career is not yet an issue for Reus. “I still have good years in my tank and I feel very good. I’m fit as a fiddle,” he explained.

Reus also praised BVB’s activities on the transfer market. “We signed a lot of national players. That shows the importance of Borussia Dortmund,” he said. So far, Nico Schlotterbeck, Niklas Süle, Karim Adeyemi, Salih Özcan and Sebastien Haller have been signed.

Reus, who has played in Dortmund since 2012, hopes that the team will “play together in this form for longer than just a year or two. But I can’t decide for others. In order to build something up properly, we need a foundation of players who can both young and older together for a longer period of time.”

BVB had served as a springboard for some players like Jadon Sancho or Erling Haaland in recent years.

Reus also spoke about the words of Jürgen Kohler, who had given BVB the role of favorite for the championship in relation to the newcomers: “If we listen to all the experts what they say about us year after year, then it’s always one wild roller coaster ride. One says that. The other says that. We are well advised to think about ourselves. (…) Of course the pressure is there, but we will play a good role.”