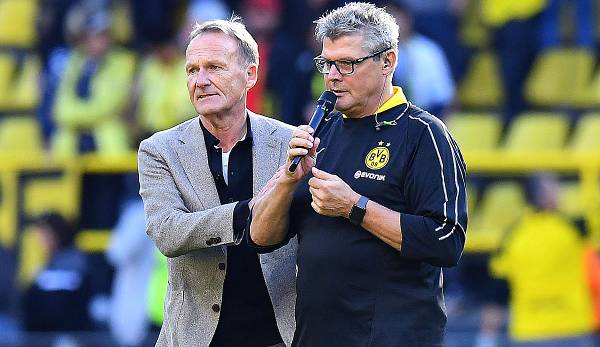 On the occasion of his 30th anniversary as Borussia Dortmund’s stadium announcer, Norbert Dickel spoke about his first assignment. There is trouble in the handball department. And: The black and yellow say goodbye to Asia during the World Cup break. Here you can find news and rumors about BVB.

On September 12, 1992, 30 years ago on Monday, Norbert Dickel made his debut as Borussia Dortmund’s stadium announcer. Back then, BVB won the DFB Cup 5-4 on penalties against FC Bayern.

“I have to admit that I was scared,” the 60-year-old is quoted as saying about his debut on the BVB website.

Dickel had to end his professional career at the age of 30 due to persistent knee problems. He was then promoted by the then president of the association, Dr. Gerd Niebaum asked to take on the role of stadium announcer.

The former striker celebrated his greatest sporting success in 1989. In Dortmund’s 4-1 victory in the DFB Cup final against Werder Bremen, Dickel scored twice.

“Nobby is not only the hero of Berlin and a striking BVB face, but also the voice of our club,” said BVB Managing Director Carsten Cramer on the occasion of the 30th anniversary.

Most recently, Dickel had to pass against Copenhagen in the Champions League because he injured himself while grilling and then had to go to the hospital. “I turned on the gas grill and there was a deflagration. I burned my shins pretty badly,” said Dickel. He hopes to be back in the district derby against FC Schalke 04 on Saturday.

BVB, News: Is the handball department threatened with a scandal?

Shortly before the start of the season in the Handball Bundesliga, two national players, Amelie Berger and Mia Zschocke, handed in their termination without notice to BVB. The background is opaque, but a first meeting took place on Monday, in which, in addition to the handball managers and club president Reinhard Rauball, representatives of the independent contact point for violence and abuse in top-class sport, “Start against Violence”, also took part.

The meeting was unsuccessful. There is now to be another meeting and it was agreed not to disclose the background to the case. “There will be further talks this week. After that we hope to be able to conclude the matter promptly,” said BVB department head Andreas Heiermann German press agency: “Water level reports would not be helpful in this situation now.”

Previously, Heiermann had confirmed that he had not accepted the immediate dismissal of the national players who were currently on sick leave.

Mark Schober, the CEO of the German Handball Federation, also spoke up: “The association is aware of the facts. Due to the personal rights of the two players, we are not making any comments, and we are not a party to the current proceedings.”

Borussia Dortmund is extremely successful in women’s handball. In 2021 the team won the German championship.

Borussia Dortmund uses the World Cup break and travels to Asia for ten days on November 21st. The black and yellow will play friendly matches against a local team in Singapore, Indonesia and Vietnam.

“The unique break in the season in November and December means an unusual challenge for all clubs. It was important to us to make these weeks as good as possible for the players who are not taking part in the World Cup. This also includes players from our U23s and U19s , which we want to introduce to the professional squad at a high level,” said sporting director Sebastian Kehl.

Of course, the trip is primarily intended to promote foreign marketing. “This exciting trip, which we’re really looking forward to, helps with that because, in addition to the sporting challenge, we also see it as our obligation as Borussia Dortmund to represent our club and the entire Bundesliga internationally,” said Kehl.

Manuel Akanji, who switched from Dortmund to Manchester, has stepped up against his ex-club. “It wasn’t an easy time for me,” Akanji told dem View about his departure from BVB: “I was part of the team and had an ongoing contract, was focused and kept pushing in training. The principle of performance no longer counted, I sat in the stands, no matter how well I trained.”

After the 3-0 opening win against FC Copenhagen, Dortmund will be visiting Manchester City for the start of the Champions League on Wednesday (9 p.m. in LIVETICKER).