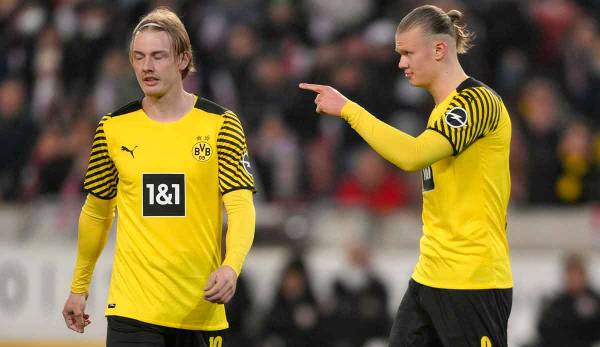 After the injuries to Giovanni Reyna, Mats Hummels and Mahmoud Dahoud, BVB coach Marco Rose announced further details for Saturday. At the same time he said unlucky Reyna courage. Goal scorer Erling Haaland strengthened the Dortmund coach with a view to his lack of goals. The news and rumors about BVB can be found here.

Marco Rose gave courage to Giovanni Reyna, who was replaced in tears in the 2-0 win in Stuttgart. “It’s incredibly bitter for the boy, of course he gets all the support from us. We’ll get him fit,” said the Borussia Dortmund coach at the press conference. “An incredibly good kid who has the potential to be a world-class player. We’ll get him healthy and stable.”

Reyna had to be substituted in the early stages with a suspected hamstring injury. The American had already been out injured at the end of 2021 (muscle injury) and most recently until the beginning of March (thigh injury). The 19-year-old disappeared into the players’ tunnel in tears.

Rose could not give an exact diagnosis on Friday evening, but announced a more detailed examination for Saturday.

This also applies to Mahmoud Dahoud (shoulder) and Mats Hummels, who were also injured. “Mats noticed something on his thigh,” reports Rose.

BVB coach Marco Rose has taken the long-time physiotherapist Thomas Zetzmann under his protection. Rose emphasized that his departure at the end of the season had nothing to do with the current injury situation.

“There were rumors about a very deserving physiotherapist leaving the club for private reasons,” emphasized the Dortmund coach at the press conference. “None of this is related to any injury worries that we have from time to time.”

Borussia Dortmund has already lost more than 2000 days in the current season.

According to Marco Rose, the goal drought of Erling Haaland, who has been goalless for five games, is not due to the ongoing rumors about the Norwegian’s future.

“His future has nothing to do with it, what’s holding him back is his foot,” emphasized BVB coach Rose on the PK after the 2-0 win in Stuttgart. After all, Haaland prepared the 1-0 lead through Julian Brandt, but has been waiting for his own goal for 285 minutes.

Haaland is still struggling with the consequences of an ankle injury that he sustained during the international break. “Actually, he’s not one to take a painkiller before the game. But today he is,” explained Rose. “He’s a world-class striker, that’s happened to most people. He’ll be all the happier if he scores again.”