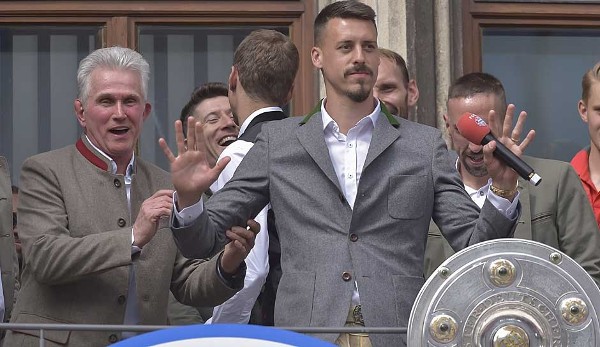 Hasan Salihamidzic celebrates his 46th birthday on New Year’s Day 2023. On this occasion, we have been examining the transfers of the sports director from FC Bayern Munich since the summer of 2017 and rating them.

Note: The summer newcomers from 2022, i.e. Matthijs de Ligt, Sadio Mané, Mathys Tel, Ryan Gravenberch and Noussair Mazraoui, are missing from the list. You haven’t been around long enough to make a final assessment of the transfers.

However, you can read the testimonials of these and the other Bayern players from the “first half” of the current season here.

The striker, who already played in the FCB youth team, was brought in to give Robert Lewandowski a few breaks.

Wagner was aware of his role from the start, he rarely complained about a lack of playing time. In his first season, he scored eight times in the league. In the winter of 2019 he moved to China and ended his career in 2020. Note 3.

After barely playing in the first team in his first season in Munich, he is now a regular.

Davies slipped into Bayern’s first eleven due to many injuries. Under Hansi Flick, the fast Canadian on the left side of defense really blossomed. Is also seeded under Julian Nagelsmann. Note 1.

Goretzka’s commitment turned out to be a jackpot for FCB. After initial fluctuations in performance, the midfielder turned up the heat after the first Corona break in 2020 at the latest.

The ex-Schalke player is not only a top performer on the pitch, but also makes an excellent impression with campaigns like “We Kick Corona”. No wonder FCB extended him to 2026. Note 1.

The most expensive purchase in Bundesliga history did not seem to pay off at first because Hernández was struggling with many injuries.

The Frenchman, who can be used both in central defense and on the left side of defence, is now convincing on a regular basis – but after the World Cup he was injured again a long time ago. Grade: 2.

It didn’t take long for the Frenchman to get used to his new environment. He was often asked for at right-back.

The 25-year-old was particularly convincing in the treble season, but since then he has reduced both defensively and offensively a bit. Is now facing a change because he wants to play permanently in central instead of external defense. Grade: 2.5.

The talent convinced in Hamburg with his technique and many dribbles that led to goals. As soon as the change became known, however, there were no further assignments.

So also at FC Bayern. Arp was only used in the 3rd division for the second team. He only played briefly for the pros. Kicks in Kiel now. grade: 5

Was touted as Brazzo’s “great talent”. However, it became one of the biggest, if not the biggest, misunderstanding of transfers in recent years.

After a weak loan season in Marseille, Cuisance no longer plays a role in Munich. Was largely left out despite the many failures in the first half of the season. Plays in Turkey now. grade: 6

Brought in from Barcelona because of Leroy Sane’s failed move, the Brazilian should take the record champions to the next level with his technique.

Coutinho had a difficult time in his only season, but got better and better with better fitness after the corona break. Helped with important goals in the Champions League win, then returned to Barca and is now at Aston Villa. Note 3.

After the departures of Arjen Robben and Franck Ribery, the Croatian was brought in as an alternative on the wings. Perisic filled his role perfectly.

He was always there when Gnabry or Coman were injured or needed a break. Bayern thought about signing Perisic on a permanent basis, but in the end he was too expensive for them. Grade: 2.

The Spanish right-back barely had any minutes in Madrid. In Munich he should compete with Pavard in the second half of the 2019/20 season.

Bottom line, though, Odriozola wasn’t a factor at all and didn’t get past a few brief appearances. Consequently, he returned to Madrid – after all, as a triple winner. Grade: 5.5.

For the 2020/21 season, Bayern brought in the young central defender from Paris, who had already gained experience in PSG’s professional squad under Thomas Tuchel.

Nianzou was injured, tore a muscle bundle early on and then dropped out with a thigh problem. Despite good preparation, under Nagelsmann he is only a supplement. Went to Seville in the summer because Matthijs de Ligt was coming. grade: 4

A U21 national goalkeeper for free? Sounds good. However, Nübel did not get a chance at all because of Manuel Neuer and was loaned to Monaco.

In the principality he was criticized early on. Played regularly under Niko Kovac, but Kovac was sacked in Monaco at the end of the year. Although Bayern want to bring him back in winter 2022 because of Neuer’s injury, Nübel probably refuses. grade: 4

An absolute bargain for this price. It quickly became clear: a transfer with potential for a coup.

Always showed his dribbling skills, improved defensively. After difficult weeks and months, he really got off to a good start in the first half of the current season. Grade: 2.

Came in as Pavard’s back-up to move Joshua Kimmich to midfield on a permanent basis. Just like his predecessor Odriozola, the Frenchman has not been convincing so far.

Sometimes disoriented in positional play, not robust enough in duels, too imprecise in passing. His contract runs until 2024, and a change is currently out of the question for financial reasons. Grade: 5.5.

Reliably filled his reservist role, but was out for a long time towards the end of the past first half of the season due to a corona infection.

Choupo-Moting mainly delivered during Lewandowski’s injury break in April. After his departure, he really blossomed. Grade: 2.5.

Salihamidzic is said to have been watching the Spanish midfielder for some time. A change, however, came as a bit of a surprise – after Roca’s relegation with Espanyol.

The Brazilian played for Bayern from 2015 to 2017. Salihamidzic was not exclusively committed to the loan, but also some players who still knew Costa.

In the fall he set a few accents before he got fewer and fewer playing times in the winter and finally got a hairline fracture in his foot. Bayern refrained from buying. Costa is back playing for Gremio in his home country today. grade: 5

Was primarily considered a dream player by ex-coach Flick, who had been following Dantas’ career for some time. In Munich, however, the teenager was never able to assert himself.

Bayern finally decided against a permanent commitment, which is why Dantas returned to Benfica and then went on loan to CD Tondela. Today at PAOK Thessaloniki. grade: 5

The Frenchman followed Nagelsmann from Leipzig to Munich and should help Bayern to compensate for David Alaba’s departure to Real Madrid.

But it showed towards the end of the first half of the 2021/22 season why Bayern got him. Extremely stable and top performer since the summer. Grade: 2.

Like Upamecano in the summer, he also made his way from Leipzig to FCB. The Austrian could not meet expectations.

Initially mainly a reservist before he got a few chances in the starting XI. Stabilized in the current season. grade: 4

The move from England’s second division to the Bundesliga was a big step for the left-back in the summer.

The Englishman struggled in the first half of the year and only got a few chances to show himself. In the DFB Cup he managed his only goal participation with an assist. With Nottingham Forest since summer 2022. grade: 4

After five years as Manuel Neuer’s backup, Ulreich wanted to be the regular keeper again in 2020 when he switched to HSV. A year later he returned.

In early 2022, he reliably slipped back into the backup role at Bayern. But he is currently not believed to be able to replace Neuer. Note 3.