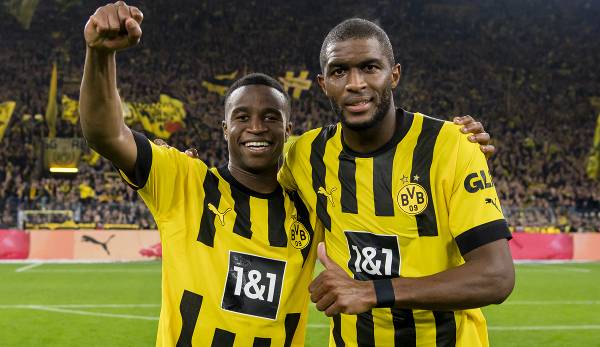 Youssoufa Moukoko was in the starting XI for Borussia Dortmund twice in a row. His performances and simply the outstanding talent of the 17-year-old must make him the new number one striker at BVB. A comment.

“I would prefer it if Moukoko and Modeste scored,” said Edin Terzic before Borussia Dortmund’s 2-2 draw against Bayern Munich, in which Youssoufa Moukoko and Anthony Modeste scored for BVB. So the wish of the Westphalian coach has come true.

In the first instance, however, Terzic decided to start with Moukoko up front for the second time in a row. It was worth it in each case and should therefore be retained – due to Moukoko’s performance and his simply outstanding talent. Dortmund will continue to rotate in the next few intense weeks and will not be able to spare attacking either, but the 17-year-old must be Dortmund’s new number one striker in the absence of the sick Sébastien Haller.

The arguments for this have less to do with Modeste’s numerous untapped opportunities. The new signing from 1. FC Köln joined a team two months ago at the age of 34 that is at a much higher level than he was before. Like any other newcomer, Modeste has to be integrated into his new environment in terms of sport and personality.

In this respect, Moukoko is already further, he has been part of the BVB professional squad for two years now. If he plays, the Dortmund game has to change less. On the other hand, if Modeste is on the field, that also means a certain one-dimensionality, because the Frenchman shines as a finisher, especially in the penalty area.

Borussia is then forced to use its header power – but the large number of crosses and high balls required for this contradict the spirit of this team. “Since I’ve been here, we’ve never been a team that came up strong on the flanks,” said Julian Brandt recently.

Moukoko, on the other hand, already brings a very complete package with him. All corners and ends of that still need to be polished, but the profile of the U21 international is much better tailored to Dortmund’s approach.

Moukoko is not yet the wall player that Modeste can be in top form. But he has recently improved significantly in this area, as Terzic confirmed after the win in Seville: “Youssoufa kept pushing himself into the opponent. He was very good in timing to make up for the physical deficit he had against a has a great defender to stamp out.”

Youssoufa Moukoko improved in the game against the ball

Moukoko appears with the necessary courage, he shows determination in his actions, always seeks depth and conclusion and is also better involved in the combination game than Modeste was in his performances. His technique is strong and the first contact has also improved, as shown, for example, in the outstanding ball acceptance before the goal to 3-0 against Sevilla.

Moukoko is also in better hands than Modeste in the BVB game because he offers many good running paths and has increased in the work against the ball that is so important for Terzic’s football. In the past two games, he has often won the ball in his own half.

Everything that Moukoko doesn’t have yet can primarily be explained by his age and lack of experience: making the right decisions at high speed, becoming more precise in the end, turning off the wild in his actions, getting an even better understanding of the game .

BVB: Anthony Modeste’s joker role is exactly the right one

Given his talent, he should be able to iron out these shortcomings almost automatically as long as he gets regular playing time and, unlike last season, stays free of injuries.

Modeste will also improve in the Dortmund jersey as the season progresses and will also get starting XI appearances again. But currently the role as a joker, which is associated with less pressure, is exactly the right one for him and BVB.

Dortmund would be well advised in the future to use Moukoko’s great activity, his agility and the high level of commitment, which he sometimes has to channel even better. “He’ll still score a lot of goals for us,” Terzic looked to the future in Seville. In any case, the start would have been made.