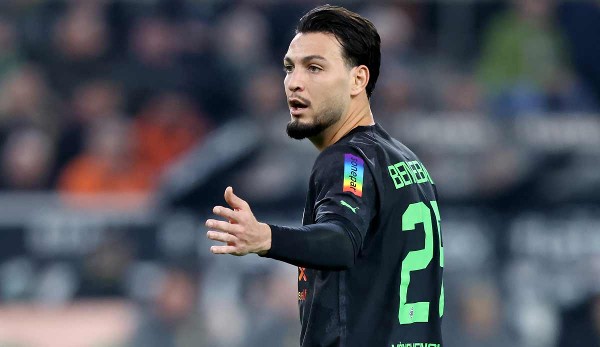 Ramy Bensebaini’s agent has confirmed talks with BVB about moving the full-back from Borussia Mönchengladbach to Dortmund. After Raphael Guerreiro, Jude Bellingham was the last BVB professional to say goodbye to the World Cup in the quarter-finals. And: At the “Christmas Cup” in Bucharest, youngster Ole Pohlmann is the center of attention. All BVB news can be found here.

Borussia Dortmund is courting the services of Ramy Bensebaini. However, BVB is not unrivaled when it comes to courting Borussia Mönchengladbach’s full-back. This was confirmed by Bensebaini’s advisor Jaspal Singh Gill sports1.

“I can confirm that there are talks with BVB,” said Gil. To sports1-There was already information about a meeting with the consultant and BVB sports director Sebastian Kehl. “But there are also talks with other international clubs,” added Gill, but emphasized: “Ramy is a player who is interesting for many clubs and fits in everywhere, but we are currently not in front of any agreement with any club.”

Manchester City, Juventus and Inter Milan are also said to be interested. Bensebaini’s contract in Gladbach expires at the end of the season, so the 27-year-old left-back would be available for free in the summer.

Should BVB win the poker game for Bensebaini, a farewell to left-back Raphaël Guerreiro should become more and more likely. According to Rclock news The 29-year-old is said to have already decided not to extend his contract, which expires in the summer.

After Raphaël Guerreiro, Jude Bellingham was the last Dortmund professional to retire from the tournament in the quarter-finals of the World Cup on Saturday evening. In the 2-1 defeat against world champions France, Bellingham missed a possible goal shortly after the break with a long-range shot (47th).

The midfield star was one of the bright spots in the English national team and his performances drew the attention of some top clubs. England idol Alan Shearer opined in conversation with the ZDF before the game against France that BVB could earn “incredible” money from him if Bellingham were sold. “There will be a lot of clubs after him and they will have to pay huge sums to get him,” said the ex-international.

Liverpool FC, Manchester City, Real Madrid and Paris Saint-Germain have recently been said to be interested. For Bellingham, who is under contract in Dortmund until 2025, at least 150 million euros are likely to be due.

“He’s absolutely great, especially at his age so outstanding. How he takes on the tournament, no nervousness. A real leader, a boss. You can’t believe he’s still so young. He controls the middle, directs and orchestrated – just wonderful,” Shearer said of the 19-year-old.

BVB coach Edin Terzic used the last friendlies of the year at the “Christmas Cup” and before that on the trip to Asia to give young players a chance to show themselves. Ole Pohlmann was one who was able to draw attention to himself.

The 21-year-old midfielder was a regular in Borussia Dortmund’s second team before the winter break. In 15 appearances in the third division he scored one goal and two assists.

The youngster was even able to double his hit rate in his friendlies for the pros. After the ex-Wolfsburg player had already scored in a friendly against Johor on the Asian tour, the former U18 international contributed the opening goal in the 2-1 win against hosts Rapid in Bucharest on Saturday. Pohlmann can act both in midfield and on the wings.