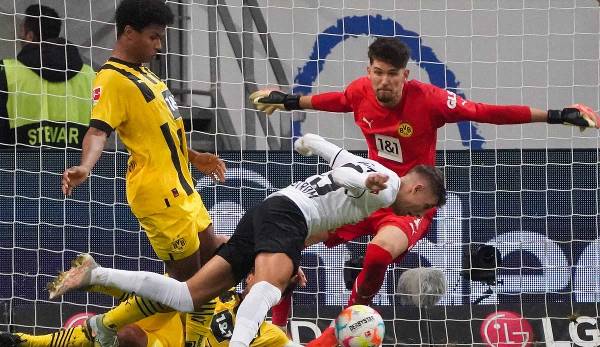 Marco Reus is not there against FC Copenhagen. Borussia Dortmund will use the upcoming World Cup break to travel through Asia. Karim Adeyemi rows back after the VAR controversy against Eintracht Frankfurt, Mats Hummels has to put up with criticism from Lothar Matthäus. And a Gladbacher is probably still very popular at BVB. Latest news and rumors about the black and yellow.

Borussia Dortmund started the journey to the sportingly meaningless group final of the Champions League at FC Copenhagen (Wednesday, 9:00 p.m.) without Marco Reus. The captain did not go on board the special machine to Denmark on Tuesday, after an early comeback he still has problems with his ankle.

“He’s not there, but he won’t be gone for long,” said sporting director Sebastian Kehl. Before the World Cup in Qatar (from November 20), Reus can only impose himself on national coach Hansi Flick in the following Bundesliga games against VfL Bochum and VfL Wolfsburg. Even before the last league game of the year at Borussia Mönchengladbach (November 11), Flick nominated his World Cup squad.

The outside players Tom Rothe and Marius Wolf were also absent from Dortmund Airport. It is expected that coach Edin Terzic will also give frequent players like Jude Bellingham a break.

BVB, News: Opponents of the Asia trip are certain

Borussia Dortmund will send a lot of players to the national teams for the World Cup in Qatar, even if it is not yet clear how many there will be in the end. The rest of the squad will then join the club on a trip to Asia during the tournament. BVB has now published the details of the upcoming tour.

The club will be on the road for a total of eleven days, namely from November 21st to December 1st. Opponents are Singapore’s Lion City Sailors on November 24th, Malaysia’s Johor Southern Tigers on November 28th and Vietnam’s national team on November 30th. A game in Indonesia had to be canceled after the stadium disaster in October.

You can find more information about BVB’s Asia tour here.

BVB, News: Are you interested in Gladbach’s Ramy Bensebaini?

Borussia Dortmund is apparently interested in the Gladbach left-back again. That reports the picture. BVB is said to have had him on the list as early as the summer. The Algerian would be available on a free transfer in 2023.

However, Gladbach is fighting to keep the 27-year-old. According to sports director Roland Virkus, an offer was made to Bensebaini, and “the club stretched to the ceiling”. A farewell to Bensebaini is considered likely.

BVB leading player Mats Hummels has defended his public criticism of his teammates after Saturday’s win against Eintracht Frankfurt (2-1). However, he was not able to convince record national player Lothar Matthäus.

“Mats should continue to be critical of himself and his teammates in public, just not so often please,” wrote Matthäus in his sky-Column. It was “too much in frequency” for him with Hummels, “and I don’t buy it from any player that he discusses everything with the cabin beforehand, but sometimes stands at the Sky table five minutes after the final whistle,” says Matthäus: “Then you can you didn’t inform the team beforehand.”

Matthäus also revealed whether he would still take Hummels to the World Cup in Qatar. Here you get all the information.

BVB winger Karim Adeyemi has corrected his opinion about the unwhined penalty in the game at Eintracht Frankfurt. After he had pleaded “no foul” when asked after the game, he now clarified this statement. You can read what he said exactly here.

sports1 meanwhile reported that Adeyemi’s initial nonchalance caused great anger among SGE supporters: “There were an awful lot of threats from Eintracht fans,” explained Patrick Berger in the podcast “Die Dortmund-Woche”. There were also “insults below the waistline”.

Felix Passlack and Borussia Dortmund could soon go their separate ways. As the WAZ reported, the 24-year-old is upset about his situation at Borussia. With BVB coach Edin Terzic, the full-back is almost completely left out, which is why even a departure in winter cannot be ruled out.

Passlack is annoyed because nobody told him in the run-up to the season what a small role he would play under Terzic. Although he does not express this irritation internally, a departure from BVB now seems inevitable.

Dortmund qualified early for the last sixteen of the Champions League last week. Accordingly, coach Edin Terzic could rotate in the final group game on Wednesday evening (9 p.m.) against FC Copenhagen, who have already been eliminated. The press conference before the game will take place this Tuesday at 5.15 p.m.

Either way, the Danes are historically a favorite opponent for BVB: It’s the sixth game against a Danish team in the European Cup, and Borussia have never lost. In the first leg, BVB won 3-0 after goals from Marco Reus, Raphael Guerreiro and Jude Bellingham.