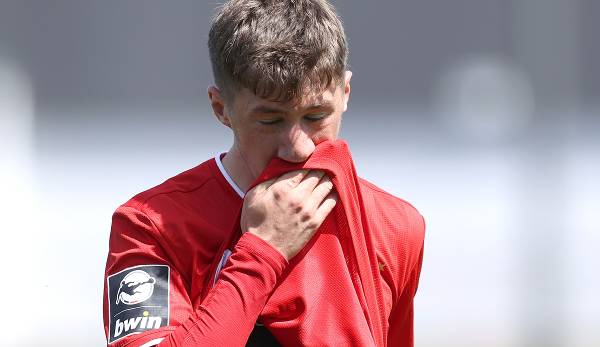 Angelo Stiller has apparently completely finished with the subject of FC Bayern. FCB Honorary President Uli Hoeneß is calling for Bayern to improve their performance and for legend Klaus Augenthaler, second place in the Bundesliga wouldn’t break a leg. The news and rumors about FCB.

For more news and rumors about FC Bayern this way.

Angelo Stiller has apparently finally finished his time at Bayern. As the former top FCB talent explained at the press conference ahead of the U21 international match against England on Tuesday, he “didn’t want to comment any more on the subject of Bayern”.

The 21-year-old played in the FCB youth team for eleven years. After moving to Hoffenheim in the summer of 2021, however, the home-grown player complained that he had never had a real chance in Munich. in the table football he described this as a “slap in the face”, in May he explained in an interview with SPOX and GOAL: “Anyone who performs in the reserves gets their chances at the top – we were always told that. I would have been happy if I had more trust would have felt.”

Now the U21 national player explained: “Of course, the time in Munich was very, very nice. I enjoyed the eleven years. But I wouldn’t want to say anything more when I say goodbye.” And Stiller continues: “I’m grateful to everyone and enjoyed the time, but I’m in Hoffenheim now.”

In the current Bundesliga season, the midfielder has made two brief appearances for Hoffenheim, in which he made one assist. He had missed the start of the season due to injury, most recently he gained match practice in the regional league.

In the context of the spectacular draw of the German national team against England (3:3), FCB honorary president Uli Hoeneß also commented on the current crisis at FC Bayern. “I have to say very clearly: our team hasn’t played well recently, we have to work on that,” Hoeneß added RTL.

An increase in performance, according to the 70-year-old, is “urgently necessary, both for Bayern and for the national team”. Jamal Musiala, of whom Hoeneß is a “big fan”, could help. In this form, the 19-year-old must be “set” in the national team and at FCB.

On the other hand, FCB stars Thomas Müller and Serge Gnabry only sat on the bench against England from the start, “the Bayern players are not used to that,” said Hoeneß. In the weeks leading up to the World Cup, he hopes the Bayern stars will get back into shape: “If our players get in shape, the national team will benefit too.”

The club legend Klaus Augenthaler was unimpressed by FC Bayern’s current crisis in the Bundesliga – there has been no win in the past four games, and the last defeat against Augsburg. “It doesn’t matter whether FC Bayern wins the championship ten or eleven times in a row. FC Bayern could also take second place in the Bundesliga one day,” he said table football.

According to Augenthaler, another competition is of much greater importance: “The Champions League is crucial, and the team is on the right track there, even if they were lucky against Barcelona that they were not 2-0 down at half-time. The Match in Milan was good.”

The end of last season against Villarreal in the quarter-finals hurt for a long time, now the team wants to make this disappointment forget. Augenthaler is also convinced that coach Julian Nagelsmann is the right man for FC Bayern even in the current crisis.

“Nagelsmann knows that he is with a big club and has to deliver accordingly. He discussed the goals with the club, they are no secret. And he was certainly aware beforehand that the wind would get rougher if he was five points behind the first standing,” said the former Bayern defender. “The current experience will toughen and strengthen Nagelsmann.”