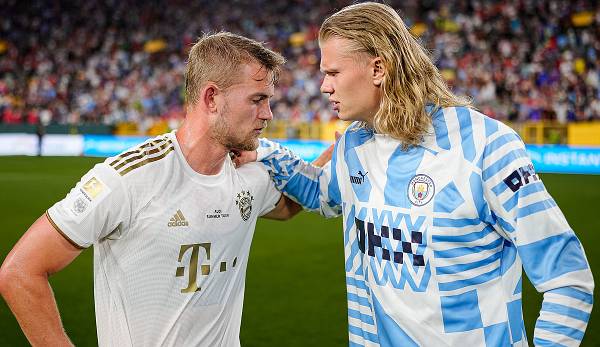 Matthijs de Ligt from FC Bayern looked back on his time at Juventus Turin. The move from Ajax Amsterdam to Italy in 2019 was a step backwards.

“Yes, you could say that,” said de Ligt in an interview ESPN: “I was captain at Ajax and felt like I had to lead this team too. Of course, if you then go to a team that has such legends in defense and in goal, for a boy of 19 it’s maybe at the beginning a bit difficult to perform like you actually could. In a way, I was less myself at Juve.”

Nevertheless, in the three years with the old lady, he benefited from greats like Giorgio Chiellini, Leonardo Bonucci and Gianluigi Buffon. “I learned a lot and tried to absorb things every day to become a better player and leader,” said the 22-year-old centre-back.

A setback for de Ligt was the separation from coach Maurizio Sarri in August 2020. After all, he was an important reason for moving to Turin at all.

“I went to Juve with the idea of ​​playing more attacking football because the manager was Sarri: he has a good reputation for what he did at Napoli and Chelsea and I thought I would find a style that matched that of Ajax is more similar. Unfortunately, he left us after a year,” recalled the Dutchman.

De Ligt: Problems with the system at Juventus

That’s another reason why the system at Juventus didn’t suit him. “At Ajax I put a lot of pressure, I took risks. At Juve it was different. I played more backwards, it was a different way of defending. In Italy the pace is generally slower, so you stay further behind can,” explained de Ligt.

Basically, the youngster from Leiderdorp prefers the right position in central defence. At Juventus, however, he often had to swerve to the left.

“In the beginning it was difficult for Juve to play on the left. Then Bonucci and I swapped places in the middle of the season. We were a good couple, we won the Scudetto,” said de Ligt: “In the second And then third year I played on the left side again. It wasn’t that I didn’t want to play there, but I knew I was safer on the right side.”

Ballack, Wagner and Hamann have their doubts about de Ligt

It remains to be seen whether de Ligt will meet expectations from the start at Bayern, where he has signed a contract until 2027. In the meantime, the first doubters have spoken out.

“He was not undisputed at Juventus. In terms of performance, he is not yet the player who brings the world-class rating. I would be careful there,” said former DFB captain Michael Ballack at a DAZN appointment.

Former Bayern players Sandro Wagner and Didi Hamann were similarly critical. “Does it make sense to get de Ligt for 70 million if you had Niki Süle and maybe could have kept him?” asked Wagner.

And Hamann said at sky: “The big question will be whether De Ligt is capable of leading the defence. He did it wonderfully in Amsterdam. He didn’t make it in Turin. He still owes the proof that he has a defense like that Bayern Munich can lead. I would be a little reserved and cautious.”