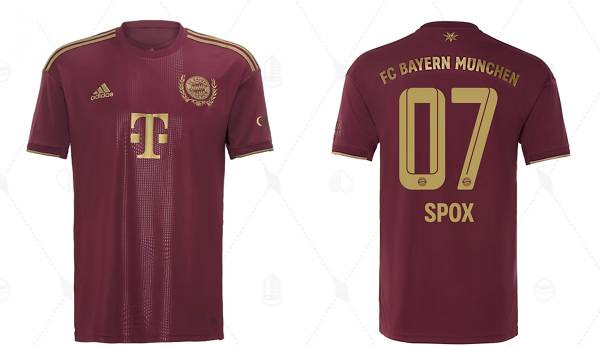 FC Bayern Munich has released the traditional Wiesn jersey of the year 2022. We’ll tell you everything you need to know about FCB’s new Oktoberfest outfit.

After a two-year break, the Wiesn is taking place again in Munich. FC Bayern Munich has released a special jersey just in time for the Oktoberfest.

This year’s Wiesn jersey comes in a bordeaux-red basic tone and has golden accents. The design elements of the kit itself are identical to the current season’s away kit. There are also the usual Oktoberfest decorations such as a laurel wreath around the FC Bayern Munich logo or an edelweiss flower in the neck area. These are also gold.

Both the FC Bayern Munich logo with laurel wreath and the edelweiss flower are embroidered. Apart from the adidas logo, which is also embroidered, all design elements and advertising logos are printed. Unlike on the normal jersey, the Telekom advertising logo consists of a T with one dot each on the right and left, but it is located in the middle of the jersey.

FC Bayern Munich: When will the Wiesn jersey be worn in 2022?

FC Bayern traditionally wears the Wiesn jersey to a home game during Oktoberfest, i.e. in September. Therefore, the jersey will probably be seen on September 30th, 2022 (8:30 p.m.) in the home game against Bayer 04 Leverkusen when Thomas Müller and Co wear it in the Allianz Arena.

FC Bayern Munich: Where can I get the Wiesn jersey? How much does it cost?

The FC Bayern Wiesn jersey is exclusively for members of FC Bayern München e. V. available. In addition, only one copy can be ordered per association member.

The FCB sells the Wiesn jersey in its own online shop. The jersey consists of three parts: the actual jersey, matching shorts and matching socks. The jersey is available in three different versions: the normal jersey, a children’s version and a fit tailored to women.

The individual prices are:

TSV 1860 Munich and EHC Red Bull Munich – What other Oktoberfest jerseys will there be in 2022?

City rivals TSV 1860 Munich have also released a Wiesn jersey for the 2022/23 season. The base color of the lion jersey is green with white sleeves. The Wiesn jersey has a heart-shaped pretzel chain on the sleeve hem. The main color of the heart pretzel pattern is also green, so that it stands out from the white sleeve. Additionally, a single heart pretzel can be seen at the bottom of the shirt on the right side, this time in white on the green main shirt. The logo of the Münchner Kindl, the official coat of arms of the city of Munich, can be seen at the top of the chest.

1860 Munich will wear the jersey in the home game against FC Erzgebirge Aue on Friday, September 16, 2022 (7 p.m.). You can buy the jersey in the Löwen fan shop of TSV 1860 Munich. You can order it for the same price as the FC Bayern Munich jersey of 89.95 euros. Unlike FCB, the lions only sell the jersey and only one version. TSV 1860 Merchandising GmbH supports the family of the deceased lion fan Moritz with part of the income from the Wiesn jersey.

The EHC Oktoberfest jersey is the cheapest of the range. You only have to pay 69.95 euros for the Oktoberfest jersey 22/23. Also the flocking of a name – regardless of whether it is a player or an individualized flocking – is free of charge. The jersey can be bought in the official sponsor’s Red Bull Shop.

What previous FC Bayern Munich Wiesn jerseys were there?

The idea was then taken up again last year, 2021, to commemorate the festival that had been canceled due to the corona pandemic and “to shorten the waiting time until Oktoberfest 2022”, according to a press release from the association at the time.

What is the Wiesn? When does it take place?

The Wiesn is the world’s largest folk festival. It has been a Bavarian custom since the early 19th century. Originally, Oktoberfest was a celebration of the marriage of Crown Prince Ludwig of Bavaria and Princess Therese, who married on October 12, 1810. As a result, many individual festivals took place in and around Munich. At that time, the actual event on the fairground of the city of Munich was a horse race that took place five days after the wedding, i.e. on October 17, 1810. The “Wiesn” got its name from the Theresienwiese, which is used as a fairground for the traditional festival in Munich.

Nowadays, the Wiesn is a huge folk festival organized by the Munich city administration. Millions of visitors gather there every year from all countries of the world to party, drink alcohol, sing and dance together. Until 6 p.m., only brass band music may be played in the marquees, provided that the noise level does not exceed a certain level. Only then does what many people imagine as the Oktoberfest begin: Schlager and pop music that resounds loudly through the tents.

The 187th Oktoberfest in 2022 will take place in Munich between September 17, 2022 and October 3, 2022 at the Theresienwiese. 17 large and 21 small marquees are available for this purpose. During the week, the festival is open in the large tents from 10 a.m. to 11:30 p.m., but drinks are served and music is only played until 10:30 p.m. Serving in the small tents is allowed until 11:00 p.m., but it also closes at 11:30 p.m. The festival starts an hour earlier on weekends and public holidays. Individual tents may be open longer.

Bundesliga: Table before the 7th matchday