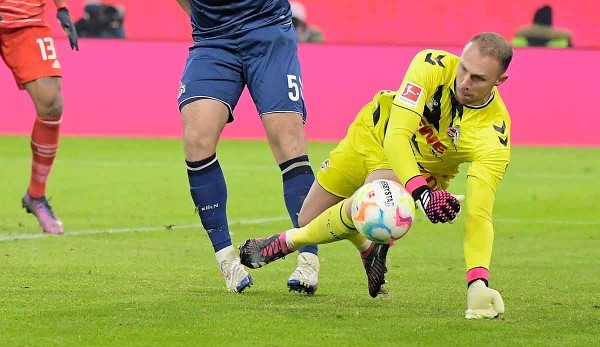 Thanks to a late goal from Joshua Kimmich, FC Bayern drew 1-1 against 1. FC Köln on matchday 17 of the Bundesliga. The scores and individual reviews of the Munich team as well as the winners and losers of the game.

WINNER OF THE GAME: Marvin Schwäbe

The 1. FC Köln keeper made six saves before Kimmich defeated him with his brilliant long-range shot to equalize. Schwäbe responded brilliantly to Pavard’s shot just before half-time (44′) and soon after the restart against Coman (54′). An application from the 27-year-old for larger tasks.

As against Leipzig, de Ligt showed an absolutely sovereign performance in the center of defense. Convinced with an outstanding pass rate of 96 percent and good duel behavior. In the 48th he failed with a strong long-range shot at Schwäbe. Grade: 2.5.

LOSER OF THE MATCH: Jamal Musiala

Is the 19-year-old slipping into the first form crisis of his young career? After a poor appearance in Leipzig, Musiala also disappointed against Cologne. He repeatedly got stuck with his dribbles and did not pose a goal threat. Grade: 4.5.

Yan Summers: Played his second competitive game for FC Bayern and was already looked after by the second goalkeeping coach. After the dismissal of Manuel Neuer’s confidante Toni Tapalovic on Monday, Tom Starke is taking care of the Bayern goalkeeper on an interim basis. Sommer had no chance when conceding a goal, in the 29th minute he saved well from Shkiri, in a confusing situation in the 39th he didn’t make the best impression. Grade: 3.5.

Benjamin Pavard: As against Leipzig, Pavard, like his counterpart Davies on the left, usually moved in when he had possession of the ball, creating a kind of 2-3-5 formation. In the 44th minute, he had Bayern’s best chance of the first half, but was denied by a strong reaction from a Swabian. In the reverse movement, Pavard repeatedly had problems with his opponent Florian Kainz. grade: 4

Dayot Upamecano: Classic Upamecano – little dark shadow but lots of bright light. Before the 0:1 he did not prevent Julian Chabot’s extension, then he shone with a number of good game openings. Note 3.

Alphonso Davies: Especially in the early stages, he was always wild in his actions, before the 0:1 he was also far too far away from goal scorer Shkiri. Davies then stabilized at least a little and put more offensive accents. grade: 4

Leon Goretzka: Only appeared as the victim of an elbow blow, for which Huseinbasic received a yellow card early on. Then showed good passes like those to Gnabry (14th) or Sané (19th) and recorded four goals in the first half, most of them on the Bayern side. Goretzka acted much more offensively than his neighbor Kimmich, which resulted in a hole in the combination game again and again. At halftime he had to give way for Gravenberch. Grade: 3.5.

Joshua Kimmich: Hardly got any space from his opponents, which is why he kept dropping deeply. After Gravenberch came on for Goretzka, Kimmich came into play better. In the 90th he scored with a long-range shot to equalize. Grade: 2.5.

serge Gnabry: After his short trip to Paris Fashion Week, Gnabry was back in the starting XI. Worked hard, but without luck – for example with his shot in the 14th minute. At the break, Gnabry had to make way for Coman. grade: 4

Eric Maxim Choupo-Moting: Hardly got balls up front, which is why he regularly dropped back to midfield. Choupo-Moting had his first half chance in the 43rd minute. In the 88th he failed on the aluminum, but was offside in the run-up. grade: 4

Kingsley Coman (from the 46th for Gnabry): When he was substituted on, he immediately got things going on the right flank, for example with a good shot in the 54th minute. Grade: 2.5.

Thomas Müller (from the 68th for Musiala): Just like at the start of the second half of the season in Leipzig, he was initially only on the bench, but this time he came into play 15 minutes earlier. Grade: 3.5.

Mathys Tel (from 82nd for Davies): Without rating.