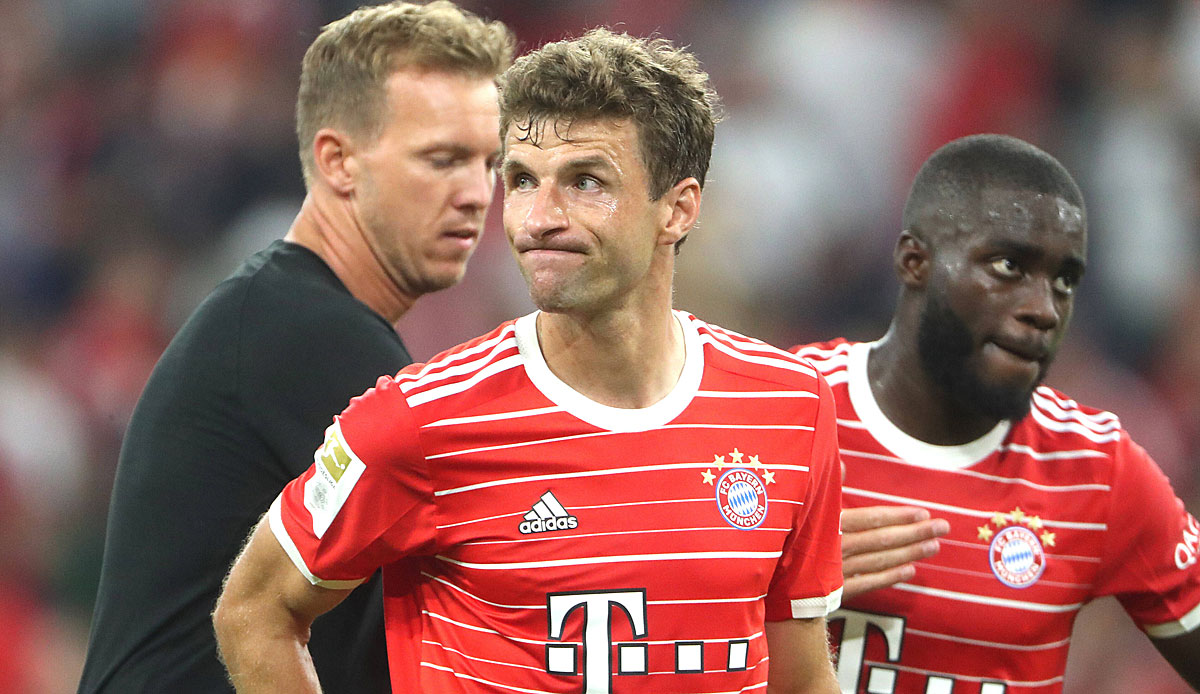 After the 1-1 draw against Borussia Mönchengladbach, FC Bayern Munich faced the Lewy question for the first time: Is the squad missing a world-class center forward?

Thomas Müller is no longer just a playmaker, space interpreter and joker at FC Bayern Munich. As long as he’s been there, the 32-year-old has been a club chronicler. In any case, after the 1-1 draw against Borussia Mönchengladbach, Müller did full justice to this role by perfectly placing a thoroughly unusual event in a historical context.

It was about a scene in the 85th minute of this wild top game. Despite the most brutal inferiority, the guests held a 1-0 lead for a long time, after Leroy Sané’s late equalizer it was now a draw. Goal scorer Sané left the pitch to applause from the Munich fans.

Instead, coach Julian Nagelsmann sent Matthijs de Ligt onto the pitch. Profession: central defender. Task: winning goal. In fact, the Dutch Star-Einkauf played striker in the closing stages. He was supposed to use some part of his 1.89m body to maneuver the ball into the goal, which he failed to do despite a good chance.

“I was still playing when Daniel van Buyten did it,” said Müller, a weary smile on his lips. “It’s nothing unusual. The measure was a good idea.” Van Buyten – central defender, 1.97 meter colossus, son of a Belgian professional catcher – scored a total of 28 goals for FC Bayern between 2006 and 2014. Quite a few of them as a striker just before the end of the game.

However, there is a slight difference between the van Buyten era and the de Ligt era. At that time, the respective coaches also had outstanding center forwards available as an alternative to the central defender: Roy Makaay, Miroslav Klose, Luca Toni, Lukas Podolski, Mario Gomez, Claudio Pizarro, Ivica Olic, Mario Mandzukic and so on. Usually so many at the same time that one could be substituted on.

Today, on the other hand, FC Bayern, as is well known, has exactly no player in this category (neither on the pitch nor on the bench). At the time of Ligt’s substitution, the only centre-forward alternative was 17-year-old Mathys Tel. Eric Maxim Choupo-Moting was not in the squad. Just like Joshua Zirkzee, who will probably leave the club for Bologna FC.

After the sale of Robert Lewandowski to FC Barcelona for 45 million euros, those in charge consciously took this risk. The Polish superstar is irreplaceable anyway, so it’s better to try something completely new right away. Instead, Julian Nagelsmann’s new 4-2-2-2 system features a quartet consisting of playmakers and wingers. And there are more playmakers and wingers (and de Ligt) on the bench as alternatives.

FCB grades: Even van Buyten 2.0 is not enough to win

So far the implementation has been sensational: 5:3 in the Supercup at RB Leipzig, then in the Bundesliga 6:1 at Eintracht Frankfurt, 2:0 against VfL Wolfsburg, 7:0 at VfL Bochum. The performance was right, the results were right. The new offensive was rightly celebrated for its furious performances. Levy? Levy? Forget.

But of course only until Bayern don’t win. Voila. 4th matchday, FC Bayern vs. Borussia Mönchengladbach: 1:1.

Was Lewy missing? Would it have been different with him? Doesn’t it need a world-class center forward? “I’ve said in the last few weeks that the questions will come,” Müller confirmed for his own premonitions. “We also had games against Gladbach with Lewy in which we didn’t put anyone in.” For example, in the 0: 5 embarrassment in the DFB Cup ten months ago. Yes, even with Lewandowski there were point losses.

FC Bayern’s loss of points: no need to worry

In fact, this game against Gladbach shouldn’t be a cause for concern for now. On the one hand, this has to do with Gladbach’s outstanding keeper Yann Sommer, who made an incredible 19 saves. That’s not everyday. Above all, however, it has to do with Bayern’s game, which once again was actually quite outstanding. And definitely not: worrying.

The flexible offensive – this time with Müller, Sané, Kingsley Coman and Sadio Mané – shone with great combinations and solos alike. Jamal Musiala and Serge Gnabry, who were in the starting XI at the start of the season, played happily after coming on. Some of them seem almost inspired by Lewandowski’s departure, freed from a rigid fixed point in the center. Regardless of the offensive line-up: FC Bayern is playing more unpredictably and spectacularly in the early stages of this season than it has in a long time.

This was the case in previous victories, where the exact same players averaged five goals per game. That was also the case with the 1-1 draw against Gladbach, when, according to Joshua Kimmich, the team showed their best performance to date. The statistics behind the disappointing result confirm it: 69 percent possession, 89 percent pass rate, 33 shots on target. All seasonal bests. Sometimes the balls land in the goal, sometimes they don’t. Lewy here, Lewy there. “If we play like we did today, there won’t be many opponents having a nice afternoon here,” said Müller.

Nagelsmann and sports director Hasan Salihamidzic were also enthusiastic about the team’s performance despite the result. Salihamidzic, who is primarily responsible for squad planning, was less enthusiastic about the inevitable Lewy question. “Should I repeat it again?” he snapped at a reporter, referring to his previous praise for the center-forward-less offensive. Then he just repeated it again and, in addition to the consumption of target water, only demanded: “Just keep it up!”