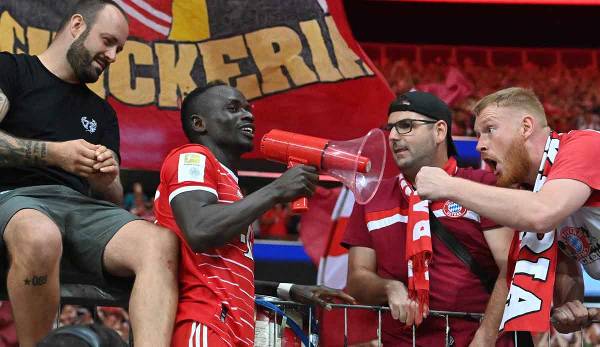 Sadio Mané on the fence, two big pyrotechnics, declining ticket demand – and the upcoming annual general meeting: In an interview with SPOX and GOAL, Alexander Salzweger classifies fan topics relating to FC Bayern Munich. Salzweger is spokesman for Club No. 12, the association of active Bayern fans.

Mr. Salzweger, before the start of the season, the website of the Munich south curve reported that “unfortunately, the last home games of the past season weren’t as atmospheric as expected”: “It has to get better again.” How satisfied are you so far?

Alexander Salzweger: We are positively surprised, the mood has improved significantly. The big choreos and pyro actions against Gladbach and Inter certainly played a role, that motivates people. What is striking, however, is that the demand for tickets has fallen significantly. I’ve never seen a Champions League game here against a top opponent where tickets were easier to get than against Barcelona. Fewer and fewer event fans and especially Asian tourists are coming to the stadium. At the same time, I don’t notice a big surge in offspring.

The game against FC Barcelona was Robert Lewandowski’s first appearance in Munich since his turbulent departure in the summer. There was mainly applause and occasional whistles from the ranks. Has his reception in the fan scene been discussed beforehand?

Salzweger: No not at all. We only worry about the return of players that we have an emotional bond with. While Lewandowski has always performed, he has never been a crowd favorite. His farewell could have gone differently. But you don’t have to whistle him for that.

Meanwhile, Lewandowski’s superstar successor, Sadio Mané, immediately sought to get closer to the fans. After winning the Bundesliga opener at Eintracht Frankfurt, he hung on the fence in front of the away block.

Salzweger: We didn’t call him up, he decided that himself. Of course, we think it’s nice that he’s looking for close contact with us fans. He’s welcome to continue like this, but please also hit the goal a little more often.

Which fence visit by a player do you particularly remember?

Salzweger: It was most emotional when Franck Ribéry said goodbye. He was crying in the arms of the fans.

Back to the game against Barcelona: For the first time, standing room was allowed in the Allianz Arena for a Champions League game. Since this season there has been a corresponding test run in Germany, England and France. What part do the fan scenes play in this?

Salzweger: The international fan organization has campaigned and lobbied for this for 18 years. Bayern representatives are also often involved in such issues. For example, our former chairman Gregor Weinreich has been doing work beyond the boundaries of the association for many years. In general, the German fan scenes are well structured and networked throughout Europe. Germany serves as a role model: We prove that people don’t die in standing room every week. With standing room there is a better atmosphere which creates nicer TV pictures and clubs can sell more tickets.

Where did you get the most help from in the fight for standing room in the Champions League?

Salzweger: At international level, organized fan work is limited to Germany, England and the Nordic countries. Such initiatives always come from the same corners.