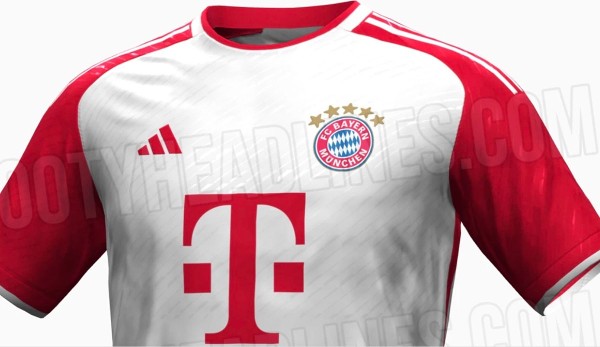 The FC Bayern news of the past few days:

Is this the new Bayern Munich home shirt for the 2023/24 season? The online portal Footy Headlines has often caused a sensation with jersey leaks. If the unveiling goes, the Munich team will wear a white jersey and red sleeves in the coming season.

So FCB would probably change colors and instead play away with the variant with the dominant red. There are few comparative values ​​from the past when it comes to a home jersey with a white base tone. So reports the picturethat the Munich team wore a similar jersey in 1932.

FC Bayern can breathe easy. Matthjis de Ligt is apparently available to the German record champions at the start of the second half of the Bundesliga season against RB Leipzig. Hasan Salihamidzic commented positively on the Dutchman’s injury. “Nothing is broken, he only paused for two days. What I can say 100 percent is that he will be there against Leipzig next week,” said the Munich sports director in an interview with the Munich evening newspaper.

Julian Nagelsmann had previously rebuffed the central defender in a friendly against RB Salzburg. But Salihamidzic is apparently a little more optimistic. “We’ll see if he can play against Salzburg. We won’t break anything over the knee,” said the 46-year-old.

The newcomer from Juventus Turin has to take a break with a swelling in his ankle. The 23-year-old twisted his ankle during training. De Ligt made 12 appearances for Bayern in the first half of the season.

Hasan Salihamidzic is enthusiastic about newcomer Daley Blind. “Daley has been training like he’s been with us for years,” the 45-year-old said of the newly signed defender sports1: “I am very optimistic that he will help us.”

Dutch national player Blind switched to the record champions last week after prematurely terminating his contract with Ajax Amsterdam. In addition to the 32-year-old, a new goalkeeper is also to move to Säbener Straße. After Manuel Neuer’s absence, Salihamidzic still didn’t want to be looked at: “We’re doing our job and will make a decision at some point.”

After returning from Qatar, the Munich side have a friendly against Red Bull Salzburg on Friday before the away game at RB Leipzig in the Bundesliga continues a week later. “A difficult task awaits us immediately in Leipzig,” said Salihamidzic, “it will be a real top game.”

Another newcomer is still pending. The search for a replacement for the injured Manuel Neuer is in full swing. Fresh on the list: Diogo Costa from FC Porto. According to Portuguese transfer expert Bruno Andrade, the Portugal international goalkeeper has a €75m release clause.

However, it seems unlikely that Bayern will spend that much money on a short-term replacement. However, Andrade reported that Costa should also be an issue for Munich in the summer. Then a long-term commitment would be quite conceivable.

The contract of the 23-year-old ends in 2027. There should be competition from Manchester United.