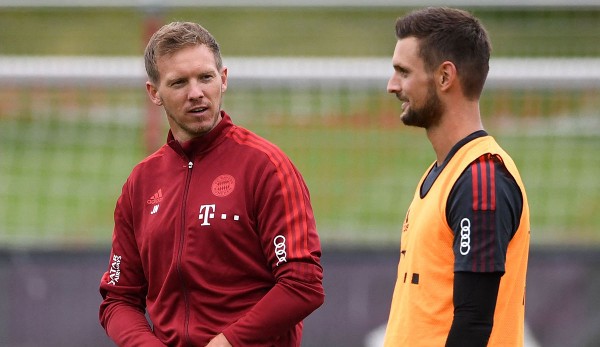 Julian Nagelsmann does not see Sven Ulreich as number one at Bayern. A change from Yann Sommer could be more difficult because of Jonas Omlin’s situation. Hasan Salihamidzic has probably turned down another offer for Vladan Kovacevic.

The FC Bayern news of the last few days

Julian Nagelsmann found clear words when asked about a new goalkeeper for FC Bayern. “Everyone sees the goalkeeper situation. We have to get a goalkeeper, there’s no question about that,” said the Munich coach, confirming the request he made last Friday evening after the 4-4 draw in the friendly against RB Salzburg.

The 35-year-old illustrated this with a scenario with Sven Ulreich: “Fictional case: Ulle tears his inner ligament next week, what do we do then? Then a very young goalkeeper, who played his first game today, has to play in the Champions League and Bundesliga. Then everyone says: Are you still very close? Why don’t you get a goalkeeper?”

However, there is unlikely to be a solution with Ulreich as number one. It was discussed with the 34-year-old that they were looking for a keeper who would put him back on the bench. “Ulle also knows that we have to make an effort. It’s our job to do the best for the club,” Nagelsmann continued.

It’s not about a lack of trust. “Ulle knows his role, we know what Ulle can do – Ulle knows what he can do,” stressed Nagelsmann. “He already had confidence in the first half of the season when Manu was injured and he played. I didn’t substitute the third goalkeeper, I substituted him,” he strengthened his number two.

That the new goalkeeper is called Yann Sommer has now become a little less likely. Borussia Mönchengladbach demands loudly for the keeper sky between eight and ten million. It’s not just a coincidence that this is the same amount that HSC Montpellier is asking for Jonas Omlin. The foals have identified the 29-year-old as an alternative.

However, the Swiss will obviously be cheaper towards the end of the season. According to the report, Omlin will be allowed to leave the French club in six months for around four to six million euros. This makes a possible transfer from Sommer to Munich more difficult, because Gladbach will not let number one go without an alternative.

Hasan Salihamidzic has apparently turned down an offer for Vladan Kovacevic. The Bosnian’s advisor, Franjo Vranjkovic, had offered his protégé to Munich again. “An English club is willing to buy the keeper outright and loan him out to a top 10 league for six months, but only to a club that is playing for something. That would be a top situation for Bayern,” the agent told picture. It is said that there was even a conversation between the sports director and Vranjkovic. But Salihamidzic apparently stuck to his no.

At the moment Kovacevic is having a good season with Rakow in Poland. The 24-year-old has probably attracted the attention of a top English club with his performances. However, in England EU foreigners may only be committed according to a certain points system.

However, Kovacevic does not achieve the necessary number of points because the Polish Ekstraklasa is not a top 10 league. Hence the plan to collect points in the Bundesliga.