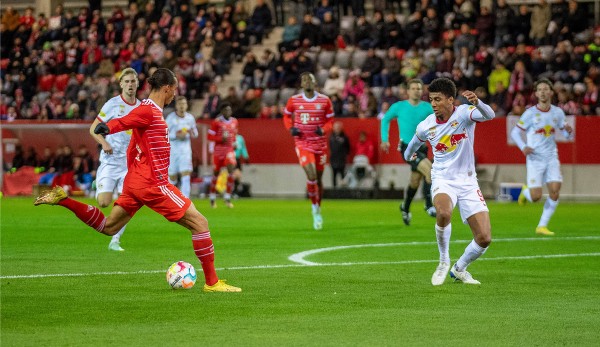 In the test match against RB Salzburg, FC Bayern Munich only managed to draw 4:4 despite a good performance over long stretches. The youngsters in particular were able to leave a lasting impression in the second round.

FC Bayern Munich started with a line-up that, according to Nagelsmann, already put those on the field “who are currently ahead”. That’s what the coach said at the press conference before this test match against RB Salzburg. Little has changed in the 4-2-3-1 system – although Gravenberch interpreted his eight-roll very offensively. Stanisic started at right-back as Pavard replaced the ailing de Ligt in central defence. It was already evident in the early stages why Munich chose Salzburg as the only friendly opponent. The Austrians went early and even forced the record champions to lose a few balls in the schedule.

However, if Bayern got past the guests’ first pressing line, it immediately became dangerous. Some good attacks ran especially over Gravenberch. This was also the case in the 9th minute, when the Dutchman got the ball from Davies and immediately picked up the pace and then served Sané. The left foot finally curled the ball into the corner to take the lead.

From then on, the game actually only went in one direction – especially the counter-pressing in the center resulted in some good ball wins. But an unfortunate loss of possession by Upamecano and an offside trap set too late by the rest of the back four left Koita alone in front of Ulreich’s goal. The attacker didn’t miss this chance and equalized (17′). Nevertheless, Bayern increasingly took control and became dangerous, especially after small-scale but quick transfers. Sané (30th), Musiala (31st) and Sané (38th) missed good chances to take the lead again – so it shouldn’t work out until the break whistle.

That should be punished in the second half. RB Salzburg made a complete substitution once, while Bayern came out of the dressing room with the same eleven. Already after 51 minutes it was 2:1 for the guests after a furious Salzburg initial phase. After a corner and several finishes, Konaté was the goalscorer. Bayern no longer seemed to have access to the opponent’s newly formed eleven. Instead, Salzburg even increased to 3:1. The Munich team didn’t manage to clear a ball properly and so Okafor was able to extend the lead (54′). Shortly thereafter, Kimmich missed the goal from a good position (55th).

Nagelsmann now switched through. Only Kimmich remained on the pitch (63rd). In fact, the young players immediately managed to revive the game. Ibrahimovic first hit the post (65th) and then with a powerful shot from distance to make it 2:3 (70th). Bayern was now more precise, purposeful and faster on the road again. They staged some dangerous scenes, especially on the right side of Kabadayi. This was also the case in the 72nd minute, when Tel broke through there and put it on Coman in the backcourt. The Frenchman thoughtfully pushed in to make it 3:3.

From then on there was a fast-paced exchange of blows with greater advantages for Bayern, who had the lead on their feet several times. In the final phase, the game then got really wild. Tel initially seemed to redeem the people of Munich. After winning the ball, the Frenchman was released on the half-left side of the penalty area, turned there with a brisk movement and pocketed the ball to make it 4:3 (88th). In direct return, however, Okafor took advantage of Bayern Munich’s deep sleep and scored to make it 4:4 (89th).

Almost at the final whistle, Kabadayi had the chance to top off this crazy gameplay. But the youngster missed a header from close range and it remained 4:4.

Julian Nagelsmann (FCB.tv): “We still have a lot to do, but a lot was good too. We started well, but then things got thin, even after the break. The boys did well. Sabi and Coman did well too. In the end we would have won be able.”

FC Bayern Munich – RB Salzburg: The data for the game

The star of the game: Arijon Ibrahimovic

The youngster not only scored the important 2: 3, which is worth seeing, but also presented himself very committed. Ibrahimovic was involved in many combinations and knew how to use his short commitment of around 30 minutes. He didn’t switch off defensively either, spectacularly tackling a Salzburg opponent in a dangerous situation.

The flop of the game: Thomas Müller

Müller was again not a big factor in the record champions’ offensive. Again, he didn’t do much in the striker position. Bayern lacked a player there who could confidently distribute the ball with his back to goal and get into good finishing positions himself. Müller is simply not that – and so it may be very difficult for the veteran in the second half of the year.

Brych led the game with a long leash, but at least didn’t shorten it and remained true to his generosity. Especially in the second half there were several contentious scenes – including in the Salzburg penalty area. But Brych let go several times. The game didn’t get rougher as a result and so the referee’s performance can be rated positively – especially since it made a very high tempo possible in the meantime.