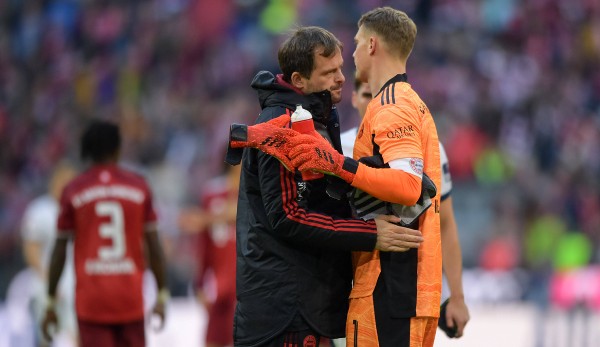 Bayern Munich has fired goalkeeper coach Toni Tapalovic without notice. The reason for this is said to have been differences with Julian Nagelsmann. But what does the sacking mean for the record champions? SPOX considers the consequences from three perspectives.

Saying goodbye to Toni Tapalovic doesn’t seem to be difficult for FC Bayern Munich. In a press release, the Bundesliga leaders not only announced the end of the collaboration very briefly, but also very matter-of-factly and unemotionally.

A small thank you for the successes of recent years is followed by Hasan Salihamidzic’s crucial sentence: “Differences about the way we work together have now led to us going our separate ways.”

According to the picture these differences existed mainly with Julian Nagelsmann. Tapalovic is said to have struggled to follow the head coach’s instructions. Any mediation attempts by Salihamidzic failed. The end of the goalkeeping coach could have far-reaching consequences for Bayern. The following three perspectives underline this.

FC Bayern Munich: The Tapalovic-Aus from the perspective of Manuel Neuer

Tapalovic was and is a close confidante for Manuel Neuer. The 42-year-old was even best man at his wedding in 2017. Accordingly, the multiple world goalkeeper will lose a confidant within the club who has always had his back and kept him free, especially in difficult times. “Today an era at FC Bayern ends,” Neuer commented on the dismissal on Instagram: “Last but not least, you also shaped me and my goalkeeping and raised it to a new level. I will miss you.”

This is another setback for him. Especially since the current captain of FC Bayern attaches great importance to a calm and, for him, smooth environment. When Alexander Nübel was once signed by FC Schalke 04, Neuer is said to have been angry. Not out of fear of losing his regular position, but because he didn’t like the communication and the change itself.

In recent years, the 36-year-old has always had the freedom to make far-reaching decisions around himself or at least to actively influence them. But with Tapalovic someone who was part of his position of power is leaving. Above all, he loses an important connection to the coaching team. According to information from sports1 regularly passed on internal information from the coaching room to Neuer, which shortly afterwards also went to the entire team. Nagelsmann in particular was disturbed.

The departure will hardly change the fundamental trust in FC Bayern, but Neuer will be weakened by it. In addition, there are currently many indications that Neuer will have to stretch a lot more after his return in order to remain the record champion’s first-choice goalkeeper in the future. Yann Sommer’s commitment was already a small pointer in this direction and the possible return of Alexander Nübel will also fuel it all a bit.

Neuer never seemed as vulnerable at Bayern as he is now. Even if those responsible recently acknowledged that he is the captain and the clear number one, they deliberately avoided looking into the future. Because this holds a lot of uncertainty – especially for Neuer, who himself proclaimed the end of an era in his statement. Even if he means it differently, more could actually change for him than he would currently like.

Because Tapalovic’s end also has consequences for Yann Sommer and Alexander Nübel. In recent weeks there have been several reports that the latter cannot imagine returning to Bayern because of the goalkeeping coach.

Even during his time in Munich he is said to have been outside of Tapalovic. According to the picture the trainer saw his task primarily in looking after Neuer and Sven Ulreich. After Nübel moved to Monaco, the relationship cooled further. The 26-year-old confirmed this ZDF. “Before we had a normal relationship. Now that I was in Monaco, there wasn’t much contact. I think we could have exchanged more,” said Nübel recently in the gym.

Although he stated that an open clarification discussion was conceivable, he was skeptical. An improvement in the situation seemed unlikely. But now new opportunities are opening up for Nübel – or even a fair chance for the first time. A lot will of course depend on whether he wants to face this competition.

Another loan is more likely. But his theoretical perspective at FC Bayern has also improved in the medium and long term. Nübel is very self-confident and does not give the impression that he has given up his big goal of inheriting Neuer at some point. Nübel’s plan is “that at some point I’ll play at Bayern. My contract runs until 2025, my loan lasts until the summer.” And further: “I’m a completely different goalkeeper than I was when I went to Bayern. It would be significantly different if I went back to Bayern.”

A declaration of war on Neuer and Sommer? That remains to be seen. The dismissal of Tapalovic should give him further tailwind. And this is undoubtedly true of summer, too. The Swiss was still cautious in his first few days, but a man of his quality will be aiming for a regular place regardless of the competition. All the better if the goalkeeping coach approaches the matter with an open mind.

FC Bayern Munich: The Tapalovic-Aus from the perspective of the FCB

For FC Bayern itself, the dismissal is also more of an opportunity than a risk. Although Tapalovic has played a major role in Neuer’s development, a lot has probably been left behind in recent years. The criticism that Tapalovic hardly bothered about the youth goalkeepers is not new. In the past, it was repeatedly heard from those around the club that he did not feel responsible for them.

Now Munich can use someone who acts more comprehensively and ensures the fairest possible conditions. With Christian Früchtl, there was a talent on campus for years that was initially given a lot of credit. The longer he was at FC Bayern, the more diverged his desires for the future from reality. The responsibility for this certainly does not lie with Tapalovic alone, but the club can use his dismissal as an opportunity to analyze these problems and improve beyond staffing.

The dismissal is also a clear signal to Nagelsmann. After all, the differences between him and Tapalovic are said to have led to the dismissal. On the one hand, this gives him a great deal of trust. On the other hand, with such power comes a certain amount of pressure.

While Neuer appropriately wrote of the end of an era, the new one can produce a lot of positive things for FC Bayern. The record champions can only benefit from fair competition between the posts. If Neuer prevails in the end, it means that he has found his old class again. If he doesn’t make it, you’re ready for a new era with Sommer or even Nübel.

Who will accompany them as the new goalkeeping coach has been decided for the time being: Tom Starke (goalkeeping coordinator on campus) took over on Tuesday when he was sweating before the game against 1. FC Köln Tapalovics and will also be on the bench in the evening. Bayern did not say how long Starke, who sees his work more in the youth field, will hold the job on an interim basis. In any case, one thing is certain: the coming months will be very interesting on Säbener Straße in terms of the goalkeeper debate.