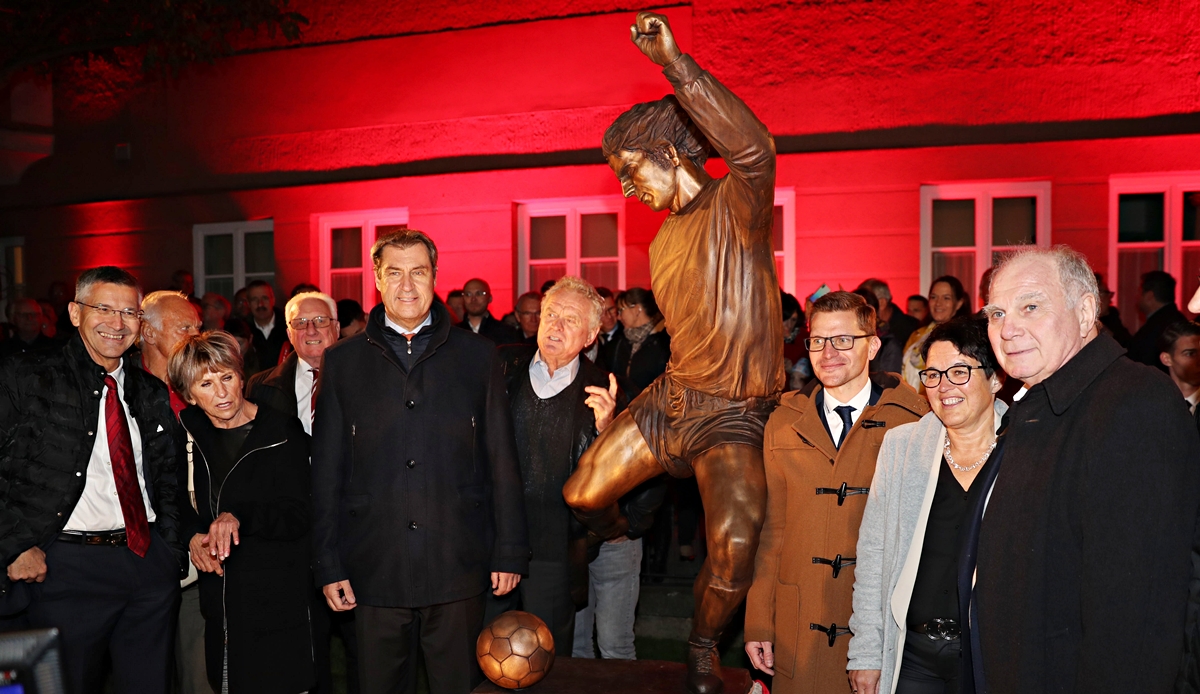 In honor of his 77th birthday, Gerd Müller’s hometown of Nördlingen is putting up a life-size statue of the nation’s bomber. News and rumors about FCB can be found here.

On November 3rd, FC Bayern club legend Gerd Müller would have been 77 years old. In honor of the nation’s bomber, his hometown of Nördlingen erected a life-size statue of Gerd Müller. It shows the bomber scoring the 2-1 winning goal for the German national team’s second world championship title in 1974. The 1.76 m tall statue was initially supposed to be placed outside the city, but after protests from residents, the monument to the hero was moved to the city centre. There it stands in the immediate vicinity of Gerd Müller’s birthplace.

Prime Minister Marcus Söder was impressed by the work of art. “I was only seven years old at the World Cup final. My father and I saw the game, I remember my father freaking out at the Müller goal. From then on I was a football fan!” he reminisced. “No matter how, no matter what the situation, Gerd Müller always scored a goal!”

The artist Herbert Deiss commented on the picture, he needed “about four months” for the statue. All the attention now makes him “speechless”. Honorary President Uli Hoeneß was also pleased about this recognition for Geld Müller. “Gerd has more than earned his monument. We had a lot of great moments with him,” said Hoeneß.

Former Bayern talent Sinan Kurt joined Turkish fourth-tier club Karaman FK on Thursday. After more than a year without a club, he now found a place to play football. In the long term, he should go to the Süper Lig, that’s the plan. The talent switched from Borussia Mönchengladbach to FC Bayern in 2014 and cost a reported three million euros. Only a year and a half later the chapter was over again. He went to Hertha BSC in the capital for a reported 500,000 euros.