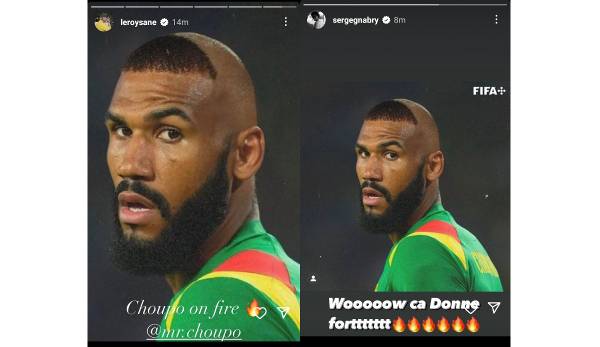 FC Bayern Munich is struggling to win 3-2 at Hertha BSC in the Bundesliga. Another outstanding Eric Maxim Choupo-Moting, the return of Manuel Neuer and a strangely inconsistent performance by the record champions were particularly noticeable in the Berlin Olympic Stadium.

In the Berlin Olympic Stadium, the distance from the stands to the square is huge. The question marks above Joshua Kimmich’s head were still clearly visible from everywhere. He dribbled a few meters several times, then stepped on the ball again with his sole and turned his head in all directions, searching.

The pacemaker was looking for his teammates. In many cases he only found those next to or behind him, more rarely those between the opponent’s lines. But that wasn’t up to Kimmich, who usually took control of the game and tried to control it. It was due to the strangely changeable Bavaria.

Early goals, pure dominance and hardly any offers on the defensive – the Munich team recently played into a “flow”, as they called it themselves. Against Hertha, however, the record champions’ game was often sluggish and predictable. There were only a few phases in which they could confirm the top form of the last few weeks.

Despite a brief 3-0 lead, there was often a lack of security in the game ahead – but they brought the result over the line. The findings for Julian Nagelsmann are nevertheless, or precisely because of this, not exclusively negative.

FC Bayern: Strangely changeable and without a train to the goal

“It wasn’t an easy game. We had a few good moments in the first half, it was a wild game,” analyzed the coach afterwards: “We led 3-0 but didn’t have any clear actions. The lead was general a little too high.” Bayern often played almost lethargically. Gaining control of what was happening was not difficult for the Munich team at first. But the great art of possession is turning control into dominance. This requires speed, depth and quick combinations with a lot of effort towards the goal. Bayern did not succeed this time.

Nagelsmann re-established a 2-3-5 stagger in possession this season. A formation that he had already tested last season, but which is now observed much better and more consistently. The goal: to occupy the center tightly, either to bring through fast attacks with many pass options in the dangerous middle of the field – or to be able to use the many players to counter-press strongly when the ball is lost. The focus on the middle of the field also creates space for the outside players – this time Sadio Mané and Serge Gnabry.

Alphonso Davies, who was later injured and replaced, and Mané rarely came into play from the left. After all, the latter initiated Jamal Musiala’s 1-0 lead after winning the ball. From the orderly possession of the ball, the left wing of Bayern mostly remained too harmless. Even against the ball, Hertha repeatedly found space on the left side of Munich to break free from the pressing.

The right side was stronger. At the latest at the beginning of the second half, when Nagelsmann’s team had its strongest phase in the pyro smoke from Berlin, it was above all Musiala and also Serge Gnabry, who picked up many balls from deep and offered Kimmich, who often waited, more options between the lines .

But after the strong 25 minutes at the beginning of the second round, inexplicable lethargy followed again. The fact that Hertha didn’t make more of the many promising ball wins was lucky for Bayern. Shortly before the end, the Berliners should have equalized. However, Myziane Maolida managed not to get the ball to any of the many free-standing Hertha players. And so it was somewhere between “flow” and “slow” a strange performance by Bayern – but a victorious one. “You have to win a game like that,” Nagelsmann analyzed soberly.

One person who was at least a little happy about the weaknesses of the men in front was Manuel Neuer. The captain celebrated his comeback in Berlin after lengthy shoulder problems – and was able to excel in several situations. “It was good for me that I was challenged from the start and didn’t have to wait long before I got the first ball,” said the 36-year-old afterwards, with memories of the time under Pep Guardiola, when he often only had to intervene in the 80th minute: “That’s how I was in the game and I immediately had a good feeling. I didn’t have any problems either.”

After only four minutes he had to parry Dodi Lukebakio’s first shot, later he even danced across the pitch in the usual manner, easily outplayed an opponent with a small arc lamp and was the support that FC Bayern was hoping for. A newcomer in top form might have done something for the first goal conceded. The ball hit the goal not far from him. Not a clear mistake, but also part of the doubts that have been accompanying him for some time. But this debate is at a very high level. And yet the big question is whether Neuer is still world class or simply “only” still very good.

When Neuer stormed out of his box in two scenes to intercept long balls from Hertha, there was at least some nostalgia. And at the same time the question of whether Bayern would have brought this 3: 2 over the finish line with Sven Ulreich. “Ulle held up great, represented me well and that’s why we were able to choose the time in principle,” said Neuer, although praising his colleague. But the quality of play that he brings compared to Ulreich makes a huge difference.

For the moment, Neuer was able to report back with a good performance against Hertha. It’s normal that not everything works after his break. However, Hansi Flick must have been very relieved that his first-choice goalkeeper is on the right track shortly before the World Cup.

FC Bayern: Is Choupo-Moting an overperformer?

Once again, there was only praise for Choupo-Moting. The Cameroonian almost scored a hat-trick. “He’s doing great,” said Neuer: “He’s a very important player and he’s also someone who keeps central defense busy.” The striker binds opponents, which would create space for the outside players or the moving up Musiala.

It is precisely because Choupo-Moting does not act like a classic nine, but interprets his role very broadly, that he is so important for his team. He also appeared several times in midfield against Hertha to be a reliable pass station there. For example, Bayern was often able to free itself from the right wing and then move to the open left flank. No wonder teammates are starting to think they’re playing with Brazil legend Ronaldo.

Just as Kimmich often waited with the ball against Hertha, many are currently waiting for the former rotation player to land on the ground again. He currently turns 0.48 expected goals into 1.21 goals per 90 minutes. He managed 0.48 assists from 0.15 expected assists. He converts big chances into 80 percent and at the same time he scores sensational goals like last time against Inter.

It is likely that at some point the number of goals will return to a reality where Choupo-Moting will not be tackling all the records that his predecessor Robert Lewandowski struggled to set. Nevertheless, it does not do justice to the quality of the 33-year-old to label him as an overperformer.

Even and especially away from the many goals, he shows with impressive consistency that what is currently dismissed as form can also be the new normal. “It’s not surprising, it’s the logical consequence,” said Nagelsmann confidently when asked about the high-flyer. The consequence of the fact that Choupo-Moting can play freely again after a break of five and a half months.