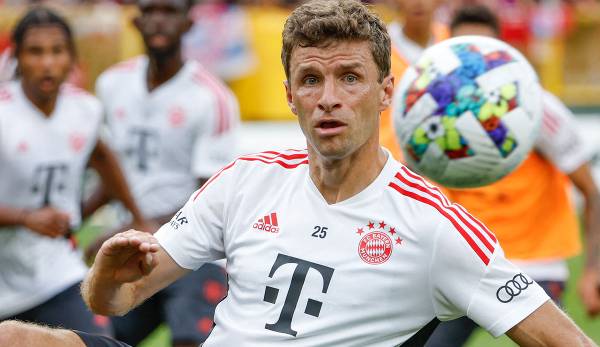 Thomas Müller is looking forward to a turbulent season and is preparing accordingly these days. Now he also calls on his teammates to be extra meticulous.

Even during the preparations, things are going fast for Thomas Müller and FC Bayern. The record champions only returned from a US tour on Sunday and the first competitive game of the season is already on Saturday with the Supercup.

In addition, the World Cup will take place in Qatar in November and December. Reason enough for Müller to prepare particularly well. “We may have a unique game rhythm, a world championship in the middle of the season. I’m trying to prepare even more meticulously and intensively,” said Müller sports picture.

And he added: “I would also advise my teammates. Now we have the phase in which the foundations are laid.”

On the US tour, Müller appeared at the German ambassador in Washington/DC with a three-day beard – his explanation: “Stress! I don’t have time to shave!”

Thomas Müller: That is my greatest passion

The Champions League will also start in September. “From then on it’s zack zack, it’s games all the time. If you want to be ready for it, then you have to prepare yourself accordingly. Basically, I’ve always lived for my passions and I stand up for them. And football is my greatest!”

“In the coming months it is essential to give football an unprecedented priority in order to be able to perform at the club and at the DFB. For me personally, one or the other in my private life will have to be a little further back,” added Müller.

In concrete terms, this means for the national striker: “Even more time for extra training and appropriate regeneration units.” Parties, on the other hand, are not at the top of the agenda: “If there’s a party somewhere, you’re the first to go home to get enough sleep.”