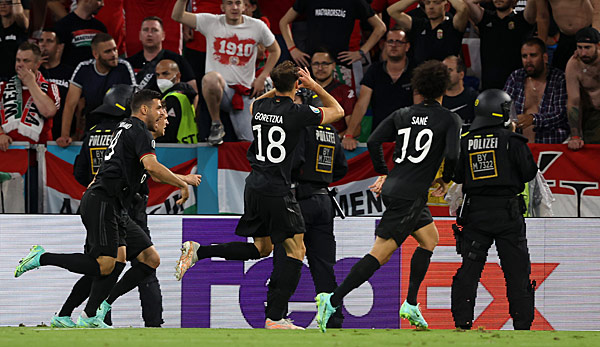 FC Bayern Munich has prematurely extended the contract with Leon Goretzka (26) until 2026. The series champion thus binds more than a reliable midfielder. A comment.

After narrowly failing in 2019, Leon Goretzka could achieve a great triumph in 2021. Among the eleven recently nominated finalists for soccer slogan of the year, two statements from him made it this time: “Corona is like soccer. A single contact is enough to turn everything upside down.” And: “It’s nice to have 82 million national coaches again and not 82 million virologists.”

In 2019 Goretzka finished second in this competition. At that time with: “I am a child of the Ruhr area. When asked about nationality, you answer with Schalke, Dortmund or Bochum.” These repeated nominations for the Football Slogan of the Year say something about the 26-year-old. Goretzka likes to take a public position, often making pointed statements on socially relevant issues.

With its early contract extension until 2026, FC Bayern has tied down more than just one reliable midfielder. Goretzka also serves the club as a positive figurehead, as a figure of sympathy, as a mouthpiece for the good cause. People on Säbener Strasse know that only too well.

In the course of the contract negotiations with Goretzka, he looked into the “past of FC Bayern”, said CEO Oliver Kahn at the press conference on Thursday. And stated: “Our very, very successful teams were shaped by very special personalities.” Personalities like Goretzka, who, according to sports director Hasan Salihamidzic, has matured into a “face of this team” since his free transfer from FC Schalke 04 in 2018.

Football saying of the year 2020: HSV coach Thioune wins – with a mockery of HSV

President Herbert Hainer added in the press release on the contract extension: “Leon Goretzka is an ideal match for FC Bayern for many reasons: On the one hand, his athletic qualities are valued across Europe. On the other hand, he has a personality that extends beyond the field of play. Goretzka is an opinion maker on and next to it Football pitch – and that’s exactly the kind of player we want here at FC Bayern. “

In the course of the Corona crisis, Goretzka not only attracted attention with pointed statements, but also with deeds. Together with his colleague Joshua Kimmich, he founded the #WeKickCorona fundraising campaign immediately after the start of the pandemic. The two contributed one million euros themselves, and they then collected a lot more.

As the face of a campaign by the Bavarian Red Cross, Goretzka called for blood donations, repeatedly took a clear position against the right-wing populist AfD and raised awareness of the topic of National Socialism with a visit to the former Dachau concentration camp.

He praised the Fridays for Future movement and the work of the Robert Enke Foundation for their work in the fight against depression. His heart at the EM in the direction of the Hungarian fan block, from which homophobic slogans could be heard, has long been legendary.

Goretzka created his stage for these deeds and statements with his excellent footballing achievements. In the 2019/20 triple season, he fought for an undisputed regular place, which he has not given up since then – provided that he was fit. With the contract extension, Goretzka will be seen at FC Bayern for a long time to come – and, unlike most of his colleagues, will also be heard with statements on socially relevant issues.