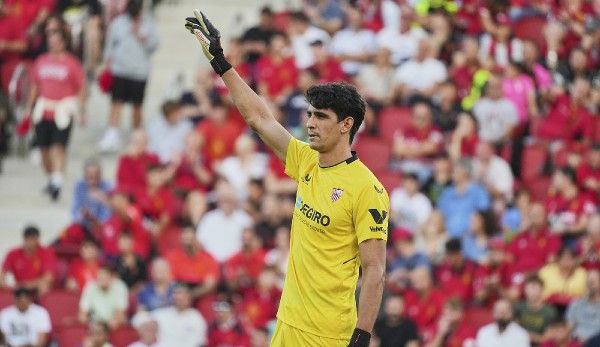 FC Bayern Munich is said to have kept an eye on Morocco’s national goalkeeper Bono. Oliver Kahn commented on possible FCB games in the USA on the occasion of the NFL game in Munich. News and rumors about the record champions can be found here.

FC Bayern are looking for a replacement for Manuel Neuer, who will be out for the rest of the season due to a broken lower leg. As the mark reported, Morocco keeper Bono is said to have been targeted by the German record champions.

CEO Oliver Kahn is said to have been quite impressed by the performance of the 31-year-old FC Sevilla goalkeeper.

However, Bayern’s dream solution remains Alexander Nübel, who is to be brought back to Munich prematurely from his loan from AS Monaco. This was confirmed by his advisor.

However, both clubs still have to agree on the transfer modalities, so the Monegasques should probably demand financial compensation for the termination of the loan and also want to secure a replacement first.

On the occasion of the NFL game in Munich, Oliver Kahn commented on possible games for his club in the USA. “A Bundesliga game between Bayern and Dortmund that takes place in New York sounds great,” said the CEO in the podcast OMR: “But you have to put yourself in the shoes of the fans.”

Even if FC Bayern have fans all over the world, the titan doesn’t want to alienate the local supporters. “What a hassle that would mean for these fans! Traveling from Munich to New York and taking on all the hassle,” explained Kahn: “We know the value of those who come to the Allianz Arena every time, who represent FC Bayern accompany you everywhere. You also have to understand them.”

In general, the 2001 Champions League winner is convinced that “95 percent of the things that we’ve seen can’t be achieved in football”. There is a big difference between the sports cultures in Europe and the USA.

“For us, football has a lot to do with culture and tradition, but you can’t close your eyes to innovation,” explained Kahn. The young generation in particular has “different demands on football and its transmission” and accordingly expects “something different from a somewhat more traditional audience” from a visit to the stadium.

FC Bayern Munich cannot find a buyer for Bouna Sarr. He reports that table football. The right-back switched to the record champions for eight million euros in October 2020 and does not play a major role there. Especially since he has not been able to play a minute since his knee operation in September.

With Benjamin Pavard, Noussair Mazraoui and Josip Stanisic, Munich have three players who are above him in the hierarchy. That’s why Sarr is for sale. According to the specialist magazine, there is no market or even a concrete interest. Sarr’s contract runs until the summer of 2024.

Bayern Munich’s central defender Dayot Upamecano has returned to training with defending champions France three days before the World Cup final. Winger Kingsley Coman, on the other hand, was sidelined due to mild cold symptoms.

Upamecano was in the squad for the win against Morocco but did not play. In the final on Sunday (4 p.m./ARD and MagentaTV) he could be back against Argentina. This also applies to Coman, who, according to the French federation, “stayed in the hotel as a precaution” during Thursday training. “His condition gives no cause for concern ahead of Sunday’s final,” the association said.

FC Bayern Munich, News: Women are in the quarter-finals of the Champions League

“The first half was below our level,” Straus said critically afterwards: “We didn’t start the second half that well either, but with the second goal we were calmer and had full control over the game.” For long stretches of the second round, he had to do without Lina Magull, who had to leave the field. According to information from SPOX and GOAL, but no serious injury is to be expected. After being substituted, Magull sat on the bench despite the minus temperatures and did not undergo any direct treatment.

“We knew how important this game is,” said Georgia Stanway about the success: “The win allows us to tackle the last game with less pressure.” Vice-captain Sarah Zadrazil was satisfied: “We had a lot of games recently and weren’t that fresh.” On the last day of the game against Benfica in a long-distance duel with Barcelona it is about who wins the group.