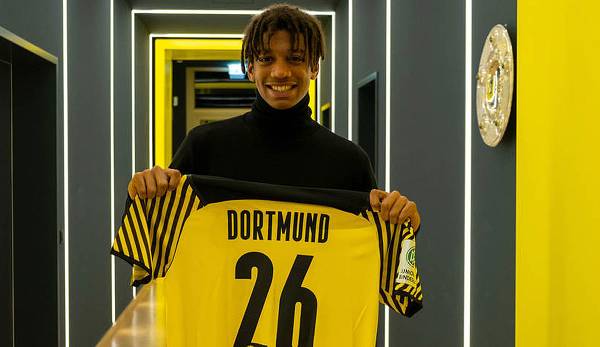 Filippo Mane joined Borussia Dortmund from Sampdoria Genoa last January. The 17-year-old central defender has a special player profile. In the coming season, Mane is set to become a regular in BVB’s U19s.

The scouting department is not only excellently positioned and networked at Borussia Dortmund. For years, the majority of professional clubs have been able to follow almost any type of football game worldwide with the help of various tools. Discovering a jewel that nobody noticed before is now impossible.

And so the BVB talent scouts were already familiar with the name Filippo Mane when they went to Duisburg in September 2021 and examined the U17 national teams from Germany, Italy, Israel and Belgium over five days at the four-nation tournament could. Three weeks earlier, Mane made his Azzurri debut aged 16 and when someone that age is already a regular for Sampdoria’s Under-19s in Campionato Primavera 1, Italy’s top division for youth teams, then it’s worth taking a closer look.

Mane confirmed there and seven weeks later at the qualifying tournament for the U17 European Championship in Ireland the good impressions that not only Dortmund had of the central defender. With Juventus, Inter and Milan, Italy’s big three clubs were also after Mane, but in the end they could not compete with BVB’s excellent reputation in the European top talent field.

“We are happy that we were able to retain another talent in Filippo Mane for the long term. A really good boy who decided to take the next step at Borussia Dortmund and to be trained in the youth sector,” said Lars, youth director Ricken last January when the Westphalians announced the deal.

BVB is already the fourth club for Filippo Mane

Dortmund is already the fourth club in Mane’s career. There he is now wearing the colors in which he started playing football. According to the family, it was once Grandpa Marino who pushed four-year-old Filippo to join Vela Mesero. The club in western Milan, not far from Mane’s birthplace Magenta, has played in black and yellow jerseys since its founding in 1951.

Novara Calcio scouts discovered him at a youth tournament when he was eight, and Mane left home six years later. Two hours’ drive from home, Mane played in Samp’s youth, where he first played at a higher junior level. A little later, the U15 was the first to be called up to an Italian national team.

Theoretically, Mane could also opt for Senegal. He has dual citizenship because his father Antoine comes from the West African country to which his son has a very close connection. “I love Senegal and when I can I go to Dakar to see my uncles and cousins ​​again,” he said. One of his uncles then helps to overcome the language barrier, as Mane does not speak French.

But of course, in Italy and now also in Dortmund, it is difficult for them to assume that Mane’s facilities are excellent enough to one day make the leap to the highest level. BVB officials agree that what Mane needs is time and patience. He moved to the boarding school at the Borussia training ground and has been learning German for a long time. Nevertheless, he only initiated the learning process on his new adventure.

“You have to give him time. He has the patience and knows that he still has a lot to learn. He still has a way to go in the youth field and has the will to improve,” says Mike Tullberg in an interview SPOX and GOALS. Dortmund’s U19 coach will now be in charge of Mane. “The plan is that we can build him up as soon as possible so that he becomes a regular in the U19s,” Tullberg explains.

Also due to a knee injury and a corona infection, Mane has made three appearances with the U17s and two with the U19s in the past season, playing over 286 minutes. Tullberg’s interim conclusion is positive: “He is very strong defensively, is very disciplined and has good duel behavior. He knows how to assess situations very well, i.e. when he has to intervene and when he prefers not to. But he is still offensive when building up the game high risk.”

BVB talent Filippo Mane: Those are his strengths

There are several things that make Mane’s player profile special: First of all, the right-footed player can be used flexibly on the defensive, he can play in the centre, half-right in a back three and as a right-back. In addition to the athleticism and physique, which he brings with him at 1.88 meters and is particularly skillful in air combat, anticipation is Mane’s greatest strength. He defends well going forward, the timing and balance in these moves are striking. In addition, he brings a high speed and already a high degree of composure, not only does his game appear surprisingly mature for his age.

“Overall, the boy is great,” says Tullberg about Mane’s personality. “He has an outstanding personality and is well brought up, which is why we brought him in. I was in the conversation with his parents and Lars Ricken.” With the German-Italian Vincenzo Onofrietti, who has been playing for BVB since 2017, Mane has a friend at his side in Dortmund who is already known from the Italian U17 national team. Communication with everyone else is primarily in English.

“It’s a great experience, both footballing and human. I’ve been used to being away from home since I was little and I’m very well looked after here in Germany,” Mane told Italian media. He plans to one day study sports science alongside his career, and he is also interested in a marketing course.

Filippo Mane has recently gained a lot of match practice

Mane has now caught up the initial deficit, he has been in full team training for a long time and has recently collected a good amount of minutes of play. In five weeks he played six games over 90 minutes in Italy’s U17s, four of them at the European Championship in Israel, where the Azzurri reached the quarter-finals.

In a little over two weeks, Mane will then become an integral part of the preparations for the Dortmund U19s, which were so successful recently (West German champions, German champions, quarter-finals in the Youth League). Tullberg’s team will change a lot, he will instruct many youngsters who first of all have to get used to the playing style and intensity.

This is particularly true of Mane, his adjustment to the new environment will have to take a first decisive step next season. Of course, grandpa will follow his grandson’s every step closely. “Of course he’s over the moon. It all started with him,” said Mane’s father.