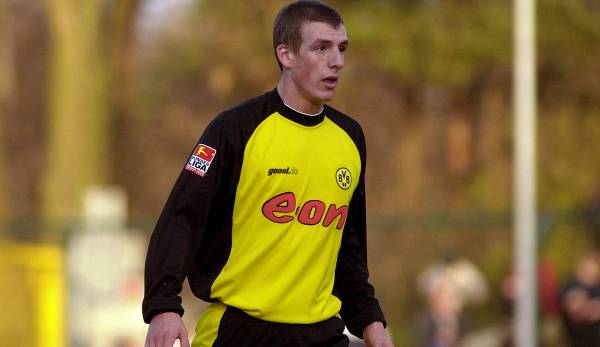 Florian Thorwart will probably never forget November 16, 2002: On this day, the then 20-year-old celebrated his debut in the Bundesliga for BVB – but only for a few seconds. It should also have been the central defender’s last appearance in the German upper house.

In an interview with SPOX and GOAL, the 40-year-old, who was once captain of the German U18 national team, talks about his time with the BVB professionals.

Thorwart talks about a failed jersey swap with Liverpool legend Steven Gerrard, remembers his second debut for Borussia and explains why he has nothing to do with football today.

Mr. Thorwart, in 1992 at the age of ten you switched to Borussia Dortmund’s youth team and worked through the youth teams there. You later became an established player in BVB’s second team, which played in the regional league at the time and was therefore in the third division. How do you remember the winter of 2000, when you were in the first team squad for three Bundesliga games?

Florian Thorwart: That was at a home game against Kaiserslautern and away in Stuttgart and Rostock. The pros were struggling with an incredible number of injuries at the time. A few younger players like Timo Achenbach or Florian Kringe were therefore called up to the squad. It was of course very cool for us to get a taste of it. To be honest, that came pretty quickly and surprisingly.

How often had you previously trained with the pros?

goalkeeper: I don’t know exactly anymore. In any case, it didn’t take very long until I sat on the bench for the first time after the first professional training session. But it was rather unrealistic that I would be substituted on in these games.

A game over a minute: These are the 35 historic Bundesliga players

A year later, in October 2001, the next two places in the squad were added: in the Champions League at home against Dynamo Kyiv and away at Liverpool FC. How was it?

goalkeeper: That was a completely different feeling. The atmosphere in Liverpool was pretty badass. At that point, I couldn’t decide whether or not to be substituted on. I remember going to Steven Gerrard after the game and asking him if we could swap jerseys. I always thought he was great as a player. He said he wasn’t allowed to. However, as I later saw in the dressing room, he switched it – with one of our better-known players. But I don’t remember with whom. A young substitute was probably not good enough for him. (laughs)

goalkeeper: He was a trainer who reflected a lot and held a small session before almost every training session. He gave a lot of feedback in general, not just explicitly for the young players. But he also took me aside a few times and gave me tips.

You were also taken aside on your Bundesliga debut in a 1-0 home win against TSV 1860 Munich when you came on for Tomas Rosicky seconds before the end. How do you remember the process?

goalkeeper: It was clear that time would be tight and only one of us could be substituted on. We warmed up with a few people. Matthias Sammer didn’t specifically wave anyone to the bank, we just all went there. He then pointed to us again and just said: Get undressed. He did not mention a name, no one was specifically addressed. So I jumped at the chance because I wanted to be a substitute. (laughs) I pretended I was meant to be and took off my sweater. That worked out, I was allowed in. I was incredibly excited.

Sammer gave you a few more words to take with you. What did he say?

goalkeeper: It was only about my general task and the rough direction. I should go straight into the defensive and not give the playmaker for Tomas Rosicky.

They finally ran onto the field and a few seconds later the final whistle sounded. Were you surprised that it ended so quickly?

goalkeeper: Yes. I thought it might be a minute. Roman Weidenfeller – who, by the way, made his debut for BVB in this game – made a tee shot before the ball hit the ground again and the referee blew his whistle straight away. I found that a bit strange.

goalkeeper: Michael Zorc congratulated me on my debut, he knew that. Otherwise, this mini-operation is unsurprisingly rather lost.

How did it go for you: were you happy?

goalkeeper: Sure, in the end I got a bonus of 1666 euros. (laughs) Jokes aside: Nobody had to comfort me, of course, but I was definitely a bit annoyed. It was a Bundesliga assignment, but somehow not. It would have been nice if I had to walk at least a little in one direction.