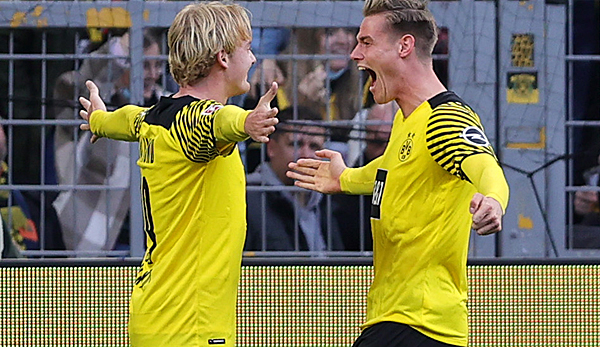 BVB is emancipating itself in small but important steps from the storm phenomenon Erling Haaland. The often criticized midfield driver Brandt is hoping for a breakthrough. And the realization matures: Borussia Dortmund can also achieve dirty work victories. Three things that stood out in the 2-0 win over the surprisingly strong 1. FC Köln.

It’s been a running gag around BVB for a long time – now even the club’s own social media have gotten on board. Before the game against Cologne, Borussia announced their own starting XI via Twitter in coach diction – with cute nicknames: Greg, Jule, Toto …

The even funnier Teletubbies variant with the ending -i was handed to Marco Rose in the PK after the end of the game: “If you want to know something about Tiggi, you actually have to ask Baumi.” Understood?

Baumi is of course Steffen Baumgart, coach of 1. FC Köln, who made a rather cheeky appearance with his team in the former Westfalenstadion. By the 0: 2 in the second place in the table, the Rhinelander were beaten well below their value.

And Tiggi – of course, that’s Steffen Tigges, Sturm-Aushilfe from BVB’s second team, so far rather moderately successful with the professionals in eight league appearances.

There have always been doubts about Tigges’ qualification for the Bundesliga since he entered the starting line-up for the first time in the DFB Cup against Braunschweig last season. Baumi, sorry, Baumgart is obviously not one of those doubters, because he would have liked to bring the 23-year-old attacker to FC before the season, but failed because of Rose’s veto, as he revealed at the press conference.

Both coaches felt that their positive opinion was confirmed by the game, because Tigges put the lid on a long-term completely open game with his first Bundesliga goal.

“He is most likely to be able to replace Erling Haaland,” said Rose, who praised the goal debutante, but aimed more at the physical requirements. Nobody can match the clipping quality of the phenomenon from Norway. BVB does not want to put this backpack on anyone.

It’s all about emancipating yourself a little from the goal guarantee, as in the successful final spurt of the previous season: 23 of the last 31 goals were distributed over nine other shoulders. At the start of this season, the one-man show Haaland was back in power.

In December at the earliest, Haaland should have cured his hip flexor problems and go hunting for goals again. Until then, Borussia will have to improvise, due to the high levels of stress, with the third division attacker Tigges from time to time. It is therefore extremely important that the striker has now gained self-confidence with a perfect joker moment.

BVB record in the Bundesliga without Erling Haaland

BVB: Sancho vacuum not yet filled

Especially since substitute number one is not yet at one hundred percent. Toto, sorry, Thorgan Hazard was out injured for a long time and has not been out of breath for 90 minutes. Already on Tuesday in the cup it was only enough for a short stint, but for a game-winning double.

The Belgian also scored against Cologne with a fine header, but had to leave the field exhausted after an hour. “I’m dead as a stone,” said Hazard after his second sprint and pushed for the early changes.

Hazard exudes a healthy dose of goal danger. But he doesn’t even come close to Haaland, not even remotely. The Belgian is a completely different player. More tricky, more agile, with a better eye for fellow players. He can also resort to the wings and shine as a preparer.

Important for BVB, because the team has deficits here too. The Sancho vacuum has not been filled for a long time. And Donni, sorry, Donyell Malen is still a long way from being able to sustainably enrich the offensive with his artfully playful style of football, let alone shape it. Malen was only brought on as a substitute against Cologne because he had a “streak”, as Rose noted and pointed out the 22-year-old’s gastrointestinal problems.

Jule is a small step closer, sorry, Julian Brandt. The talented midfielder has already played several hopeful games of the season: he was a match winner against Augsburg, and in the cup against Ingolstadt with two assists for double-packer Hazard. Brandt confirmed this and other upward trends in the victory over Cologne. Dortmund’s number 19 finally reached dangerous corners, one of which led to the decisive 2-0.

But especially in terms of fighting, the 25-year-old has made a leap in development. It was telling that the often scolded for his pomady and supposedly disembodied game initiated the BVB leadership with a won header duel against two Cologne players. Despite permanent backing, coach Rose has always openly addressed the weak duel behavior – and has now obviously achieved initial successes with the former problem child.

In order to do justice to Brandt’s performance, however, the negative points are also part of it. Although he fought the most duels of all BVB players against Cologne, he only won six of the 15. Once he danced two FC actors to thunderous applause from the 67,000 spectators – only to fail afterwards on a simple short pass. He lost 23 balls. So there is still a lot of room for improvement. But Brandt is heading in the right direction.

This also applies to BVB overall, although the victory over the brave Rhinelander was anything but brilliant. It starts with Rose’s realistic assessment of the task: “It was clear to us that Tiki-Taka is not necessarily possible against Cologne.” The BVB coach is absolutely right: With an FC in this form, a number of other teams will probably get into great difficulties.

In the current situation, with the ultra-long list of injuries and in view of the high loads in three competitions, Dortmund still got the best out of it. “FC were better at anything to do with the ball,” admitted Rose.

His team was ahead in other elementary areas, almost surprisingly: “We also won some important statistics today: duels, mileage, sprints. Compliments to the team on scoring points in this phase.” The team bites through and the so-called dirty victories are now achieved.

It is indicative that the traditionally shaky BVB defense conquered the first white Bundesliga vest against dangerous Cologne players – after conceding 15 goals well before. It certainly took a generous helping of luck, but also the will to resist. That is a quality that the Dortmund team has developed. Many of the most recent unspectacular games would have been overturned in the first half of the preseason.

Incidentally, Rosi, sorry Marco Rose, cracked a club record with six home wins at the start. So far, no coach had managed that in his debut year at BVB, not even Jürgen Klopp. Overall, Borussia is more than decent with 24 points from ten games.