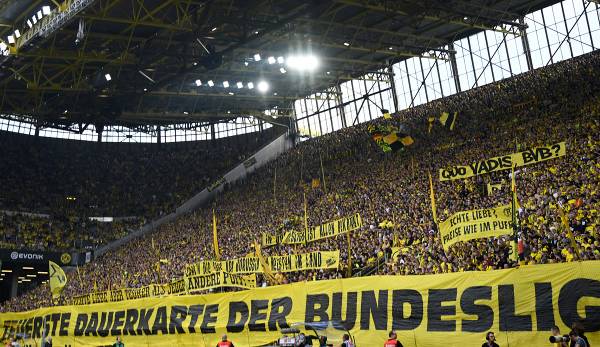 “Here is the Bundesliga’s most expensive season ticket,” read a poster almost 50 meters long and a good two meters high that was unrolled at the foot of the famous “Yellow Wall”, the south stand of Signal Iduna Park.

A season ticket for one of the coveted standing places costs 240 euros, i.e. an average of 14.11 euros for each of the 17 home games, which means that Dortmund is charging the highest prices of all 18 Bundesliga clubs.

What should also have upset the fans of the black and yellow is the fact that BVB, unlike many of its competitors, has a very high rate of price increases.

In the period from 2013 to 2022, the prices for the cheapest season ticket rose by 1.3 percent on average in the league. This was the result of an analysis by Deloitte. Borussia Dortmund estimated 3.1 percent more per season in the same period.

Before the 60th Bundesliga season started in August, some clubs even left their ticket prices at the level of the previous year, namely Bayer Leverkusen, FC Augsburg, VfL Wolfsburg, TSG Hoffenheim and FSV Mainz 05.