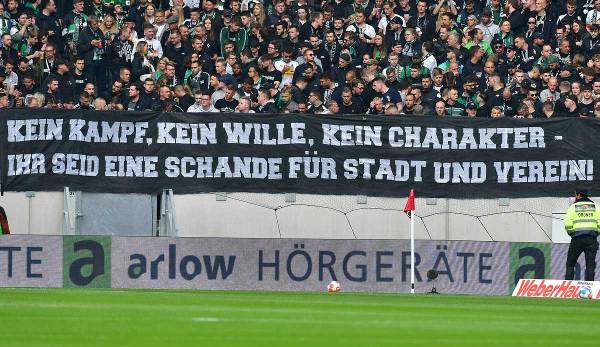 Coach Adi Hütter has shown understanding for the frustration of Borussia Mönchengladbach fans. Sports director Roland Virkus meanwhile appealed to the cohesion of fans and club.

You have to understand certain disappointments of our fans somewhere. The season is not satisfactory. That’s why you sometimes have to understand impatience at a club as big as Borussia Mönchengladbach,” said Hütter after his team’s 3-3 draw at SC Freiburg.

Hütter was reacting to the huge banner that the Gladbach fans had attached to the guest block during the game. “No fight, no will, no character – you are a disgrace to the city and the club,” it read.

“It’s not good, no question about it,” admitted Hütter. “You have to understand the anger of the fans. We only have one thing to do: play the best football we can, perform and score points. Then we can close the gap that’s currently there.”

At the press conference, Hütter was also asked that some of the fans who had traveled with him hardly cheered on Lars Stindl’s last-minute compensation in added time. “I can’t answer that because I didn’t see it,” said Hütter.

Sports director Virkus appealed to the attachment: “In the future it will be important that we all continue to stand together, also together with the fans.”

As eleventh in the table, Gladbach are far behind expectations. Last week there was also a sensitive 1:3 defeat in the derby against 1. FC Köln.