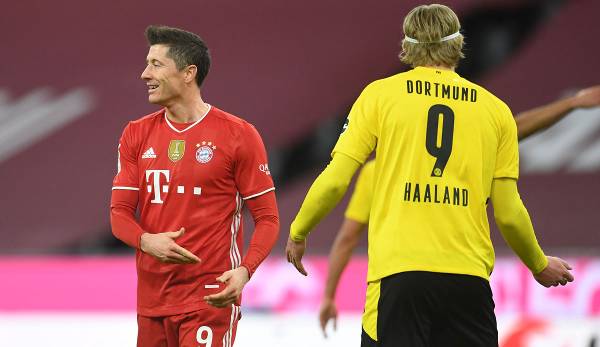 For the former Bayern boss Karl-Heinz Rummenigge, the question of who is the best Bundesliga striker is easy to answer. “In a few years, Erling Haaland could have an advantage because of his age, but today Robert Lewandowski is the benchmark,” the 66-year-old wrote in his image-Column.

The Pole is “the perfect center forward” – especially for Bayern’s possession football. “He doesn’t need any space, he has his greatest strengths in the penalty area,” enthused Rummenigge: “He’s fast, can dribble, has excellent technique and has an amazing goal rate, with which he sometimes even tops the great Gerd Müller.”

Rummenigge sees no offensive player anywhere in the world who can approach Lewandowski’s level in the center of the attack and at the end of the goal – “not even Cristiano Ronaldo”. The 66-year-old also believes that the Pole has not yet reached his zenith: “He will certainly be able to play at the top level for a few more years, I don’t see any limits for him despite his age of 33. Cristiano Ronaldo is one wonderful example. “

He therefore recommends the unconditional extension of the striker’s working paper to his ex-club: “I am convinced that FC Bayern knows what value Robert has. A contract extension beyond 2023 would therefore not surprise me.”

Rummenigge: That’s what impresses him about Haaland

At the moment, Dortmund superstar Haaland, who is currently injured, is impressed by the irrepressible will to win, “plus speed and power – a fantastic combination”.

The question of whether Lewandowski and Haaland could be successful together in a team was summed up by Rummenigge as “nonsense”: “Even the system would not do that,” wrote the ex-Bayern boss. Since Louis van Gaal, FC Bayern have only played with one striker.

Rummenigge would find it wrong to adapt the system for a new addition to Haaland. “You don’t give up a game system, which stands for the most successful decade in the club’s history, for a single player. The player has to fit the system, not the other way around.”

In addition, Rummenigge believes that the Norwegian would not be affordable for Bavaria in times of Corona. “Bayern Munich cannot invest on this scale every year, especially in times of the Corona the club has to operate seriously. In recent years, a lot of money has been invested in players like Hernandez, Sane and Upamecano.”

Rummenigge does not know whether Haaland is leaving the Bundesliga for a foreign country instead. Nevertheless, he gave the BVB fans hope that the striker would stay: “I recently had an espresso with my ex-colleague Aki Watzke in Munich. He told me he was optimistic that Haaland would still be there for the next season Borussia Dortmund will play. “