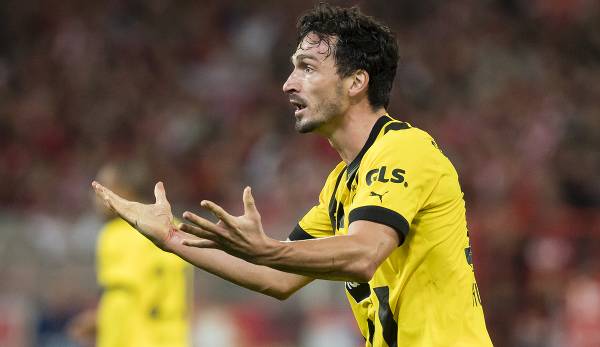 Mats Hummels recalled a bad moment involving Hannover fans. A BVB legend expects negative consequences from the World Cup. Here you can find out everything you need to know about BVB.

More news about BVB from the previous days can be found here:

BVB defender Mats Hummels gave a surprising answer when asked about the worst sporting moment and remembered a home game against Hannover 96 in the 2007/2008 season. in one tik tokvideo with the nutrition expert Nahni Franke, he spoke of a “moment that hurt a bit”. Hummels was “very fresh in Dortmund at the time”. In the second half of the 2007/2008 season, they lost 3-1 in front of their home crowd against Lower Saxony.

“The Hanover fans sang in Dortmund: ‘One shot! One goal! Hanover!’ That burned into me. Something happened there, otherwise I wouldn’t know it 14 years later.” It’s not nice “to hear such singing from the opposing fans in Dortmund” when things aren’t going well anyway. At that time, BVB was not far from the relegation zone, while 96 was in the middle of the table. At the end of the season, Jürgen Klopp took over as coach from Thomas Doll.

But there are “of course even worse sporting memories, one or the other defeat in the final was maybe even worse. But I take the “One shot! A gate! Hanover!” Variant,” Hummels continued.

On the other hand, he named a scene from the game against 1. FC Nürnberg as the best moment, when BVB became German champions in 2011. Dortmund led 2-0, as did Cologne in the parallel game against Dortmund’s rivals from Leverkusen. “There was a moment when the ball flew through the air, several headers were made, it felt like the team was looking at it for a few seconds, different players were looking, it was a few minutes before the end.” Everyone felt like, “‘Ok, we did it.’ We smiled at each other. It was a small moment that would have been overdone in the film.”

BVB legend Dede does not believe that the longer break for the Dortmund World Cup drivers could have a positive effect on the preparation for the second half of the season. “That’s not an advantage for me. The players come home frustrated and disappointed, that’s not good. A successful World Cup would have brought them much more self-confidence and motivation back to Dortmund,” said the former left-back Ruhr news.

The early end clouded “the joy in Germany very much”, the mood was “of course all the more on the ground”. The DFB team “didn’t work as a team despite strong individual players. Maybe they didn’t take their opponents seriously enough. Such a World Cup must be the biggest thing for a footballer, it’s only every four years, maybe you only play it once your life. But Germany was missing too much.”

According to media reports, the German World Cup drivers, Niklas Süle, Nico Schlotterbeck, Karim Adeyemi, Julian Brandt and Youssoufa Moukoko, along with Thorgan Hazard, Thomas Meunier and Giovanni Reyna, are expected in Dortmund on Tuesday and should be training again on Wednesday. After December 11th we will go on Christmas vacation until January 2nd. Jude Bellingham, Gregor Kobel and Raphael Guerreiro are still on duty in Qatar.