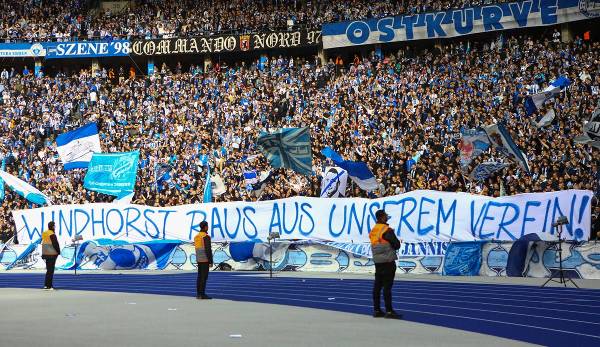 In the middle of the hustle and bustle surrounding investor Lars Windhorst, Hertha BSC prevented a setback, at least in sporting terms.

Little distance to the relegation zone and a bizarre posse about an alleged smear campaign – Hertha BSC is already making big fuss again early in the season. In the face of the hustle and bustle about allegations against the investor Lars Windhorst, the 1-1 (1-1) against TSG Hoffenheim on Sunday served as a small sedative pill: At least for the time being it won’t get any worse in terms of sport.

In any case, the players received applause and shouts of “Hahohe!” from the fans after the final whistle. “We showed character after we didn’t start well,” said Chidera Ejuke DAZN: “After conceding a goal, we fought back strongly.”

However, three draws in a row are not satisfactory: “But the wins will come.” Goal scorer Dodi Lukebakio, on the other hand, was quite happy with “not having lost”, he called for more consistency in the storm. Hoffenheim missed the leap back to a Champions League spot.

Andrej Kramaric scored the opening goal for TSG (25th) in front of 41,653 spectators in his 200th Bundesliga game. Lukebakio (37th) equalized for the Berliners, who made headlines off the pitch. According to a report in the Financial Times, Windhorst is said to have hired an Israeli agency to campaign against former Hertha President Werner Gegenbauer. The club announced a revision.

The fans made their opinions clear. “Windhorst out of our club” read a banner on the east stand. Coach Sandro Schwarz doesn’t want to be distracted. The club will do everything possible “to create clarity,” he said: “But my focus is clearly on the sport.”

Both teams started the game with high intensity, which was initially characterized by inaccuracies on both sides. Wilfried Kanga (8th) missed a good chance. Hertha could not use the following either: Grischa Prömel blocked a free kick from Marvin Plattenhardt, Lukebakio failed at Hoffenheim keeper Oliver Baumann (16th). Kramaric again missed a good opportunity on the other side (19′).

But the guests gradually got more out of the game. Kramaric finally scored for Hoffenheim’s lead. Hertha followed suit and equalized through Lukebakio. Kramaric and Prömel missed a double chance (45th) to take the lead again.

After the break, both teams continued to search for the way forward. Christoph Baumgartner (54th) shot past after a solo run, on the other side Lukebakio put a side pull (56th) just over the goal. As a result, it continued to go back and forth.

Hertha BSC – TSG Hoffenheim: The data for the game