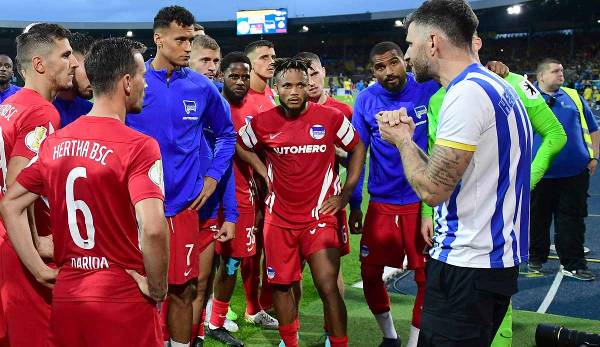 After the cup embarrassment at second division promoted Eintracht Braunschweig, Hertha BSC is already under a lot of pressure before the local derby for the start of the Bundesliga on Saturday at Union Berlin.

On the way to the dressing room, Captain Marvin Plattenhardt felt a small dash of relief mixed in with the disappointment that was still dominating. Because the 3000 fans who traveled with Hertha BSC gave Hertha BSC a second chance on penalties at second division promoted Eintracht Braunschweig despite the defeat in the first round of the DFB Cup and also documented this – with albeit restrained applause.

“The fans gave us courage for the derby,” reported the left-back, but: “Out in the first game – that’s not nice and feels bad.” The prestige duel at the Alte Försterei on Saturday (3.30 p.m.) at Union Berlin is a good and quick opportunity for Hertha to rehabilitate, but in the event of another defeat, the attachment would hardly have any credit left.

Pictures showed how the lead singer of the Hertha Ultras talked into the conscience of the players after the end of the cup. The team listened attentively. “There were no bad words about the cup and our performance,” said attacker Davie Selke picture: “He informed us of the importance of the derby next Saturday. And of course we are all fully aware of that!”

In the previous season, Hertha suffered three derby defeats against Köpenicker in the league and in the cup, after the 4-1 loss in the league in April, the Ultras also caused an uproar when they asked the players to hand in their jerseys.

But it shouldn’t and doesn’t have to come to that next Saturday, the new coach Sandro Schwarz also recognized positive things despite his botched competitive debut: “We dominated for long stretches, but didn’t bring the game home. The sharpness was there too, but that’s it not the entire season.”

However, the coach could have personalized this blanket criticism. Because already at the beginning of the second half, veteran Prince Boateng’s strength was dwindling, not for the first time, grip in duels and overview in the build-up of the game decreased rapidly. Black was almost forced to be substituted, the now 35-year-old Boateng is far from a condition in which he could help his team.

“It’s a shame, because there were a lot of good things that we worked on in preparation – but it shows that we have to keep working. We’re out, but we’re going on,” Boateng summed up succinctly.

The coming weeks will show whether it is explicitly for him with a regular place in the starting lineup or on the bench. Because the new contract until 2023, which the midfielder signed in June, is anything but uncontroversial in the capital.

Because in 18 league appearances in the past, Boateng remained without his own goal and without goal preparation. It would not be a disadvantage for him and also for Hertha if something were to change in the forthcoming Berlin derby.