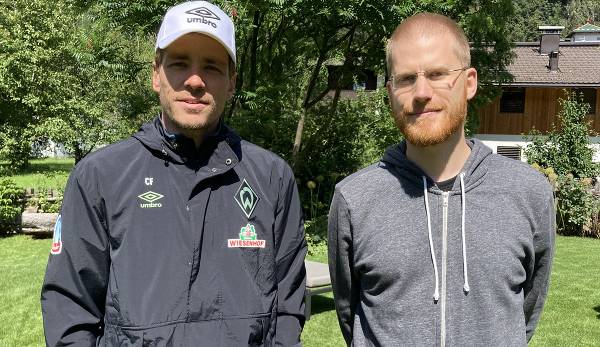 Clemens Fritz can confidently be described as a legend at SV Werder Bremen: The current head of the licensing department and the scouting department played for 11 years at SVW and after retiring in 2017 was named the club’s eighth honorary captain.

In an interview with SPOX and GOAL, Fritz talks in detail about the course of his career and remembers a meal with Bruno Labbadia, his almost move to 1860 Munich and four operations in a row.

The 41-year-old also talks about tricks from Ronaldinho, the “school days” with Didier Drogba and his chocolate consumption.

Mr. Fritz, your mother used to do artistic cycling, your father played volleyball in the 3rd league. He would have liked to see his son succeed him. At what point did he have to realize that this wish would remain unfulfilled?

Clemens Fritz: When we were on vacation on Rügen, I used to play beach volleyball with my father and his buddies. But the love for football was greater from the start. It was never like my father pushed me towards volleyball. We had a soccer field right next to our house, so I spent my childhood there with the boys next door. Finally, a classmate of mine registered with Rot-Weiß Erfurt. I wanted that too.

You were seven years old then. You spent your entire school years at a sports high school in Erfurt. What was your everyday life like there?

fritz: It was completely structured. On two weekdays we had soccer training in the mornings in cooperation with the club. I remember it very well: first two lessons in the morning, they always lasted until 9.05 a.m., then we went to the stadium next door and mostly had technique training. Then we went back to school, had a short lunch and it was over at 3:20 p.m. Then there was normal team training, in which everyone who didn’t go to a sports school took part. There was also school sports with the class twice a week.

In 1997, when you were 16, you switched to VfB Leipzig and two years later you returned to Erfurt – because both clubs were in financial difficulties at the time. What was going on?

fritz: Erfurt even faced bankruptcy. It wasn’t even clear if the club would continue. So I had to make a decision. Leipzig was playing in the 2nd league at the time and tried really hard for me. There they also got into financial difficulties later on. Then I had the same problem again. Incidentally, that was also the first time I was in contact with Werder. But Erfurt is doing much better now and it was always my dream to play there in the first team.

At that time you were still used in attack. After you scored ten goals for Erfurt in the 2000/2001 regional league season, you went to second division promoted Karlsruher SC. Your friend Marco Engelhardt, who went to the sports school with you, went with you. How was it for you to leave your home country?

fritz: Not easy. But my advisor said that if I want to get on in football, I have to slowly take the next step. That’s why I was pushed out of Erfurt a bit, otherwise I would probably still be there today. (laughs) It was a very fortunate circumstance and it helped both of us enormously that the KSC not only wanted me, but also Marco.

In Karlsruhe you became a regular right away and played alongside Bruno Labbadia up front.

fritz: I still remember well that Marco and I came to the training camp in Bad Wörishofen relatively late. Suddenly I was sitting next to Bruno Labbadia eating. I hardly got a word out for the first few days. Bruno then broke the ice because he noticed how hesitant and reserved I was. Torsten Kracht, who came from Leipzig and had previously played in the Bundesliga, also became an important reference person. We spent many Champions League nights with him, and he always cooked for us.

After two years at KSC, you moved to Bayer Leverkusen in the Bundesliga in 2003. How did that come about?

fritz: At the time, KSC was also in financial difficulties, so they were open to a change from me. Actually, I would have liked to have played another year in the second division because I wanted to take it step by step. Leverkusen were very interested and wanted to get me. They had a very strong squad back then. I was already asking myself whether I would be able to work there.

You seem to have finally answered the question for yourself.

fritz: The plan was for me to go to Leverkusen and be loaned to Arminia Bielefeld for a year within the Bundesliga. However, I really wanted to stay in Karlsruhe. I still remember when Reiner Calmund was in South Korea at the 2002 World Cup, I was in Karlsruhe and we were on an exchange. At some point it was agreed that Bayer bought me, KSC received the necessary money and I was allowed to stay there on loan for a year.

Klaus Augenthaler was your coach in Leverkusen. How do you remember him?

fritz: In my first training session, we did a bit of technique in teams of two and hit a few crosses. Back then it was Confed Cup, we were maybe ten players. He then came to me and said: ‘Clemens, you’re doing with me.’ I found his shooting technique very impressive. After training, he often grabbed a goalkeeper and just screwed things up in the gable. That was madness. Even at that age, he was still a very fine, clean footballer.

So how did it go for you in a team of two with Augenthaler?

fritz: I was really nervous and didn’t hit any good balls. I don’t know either, but Leverkusen were in the Champions League final the year before. I still felt like the boy from the second division. I also had a difficult time in the first half of the year with only a few minutes playing and wanted to be loaned out so that I could get more match practice.

Why didn’t that work?

fritz: Hertha BSC and 1860 Munich wanted to loan me out, but I actually agreed with the lions. But since not everything was settled between the clubs, I flew with the team to the training camp in Marbella. There Klaus Augenthaler said I should step on the gas and lose my respect for my teammates – because I definitely had that. I then played good preparation, but I was already at 1860 in my head. But Rainer Calmund saw me earlier in Leverkusen, so the loan didn’t come about.

Her debut in the starting XI was not long in coming.

fritz: That’s true, but at first I was completely perplexed. We played in Freiburg, had injury problems and a few guys from the second team. Two of them came on at once – and I stayed on the bench. Then I thought: What are they doing to me? But: Before the third game of the second half of the season in Hanover, Klaus Augenthaler came to me at the lunch buffet and asked if I was ready. Then he let me pull over to the right for the first time. I played properly. After that, he trusted me more and I played more regularly.

Just nine months after your Bundesliga debut, you broke your left fibula on July 24, 2004 in a preparatory game against Rot-Weiss Essen. In the end, things got so complicated that you had to have four surgeries. What exactly happened?

fritz: Our team doctor operated on me and then immediately said that another operation had to follow. Ten days later I was under the knife again. After two and a half months of rehab, while I was already walking, my foot was always badly swollen. I was therefore supposed to be treated by Klaus Eder in Donaustauf for a week. It ended up being four months.

You are before the third operation to Dr. Hans-Wilhelm Müller-Wohlfahrt to Munich. What was his prognosis?

fritz: It said something wasn’t right. Müller-Wohlfahrt determined that the plate was not properly fixed, that I had an infection in my ankle and that arthrosis could develop. A world collapsed for me.

Clemens Fritz: An overview of the stations in his professional career