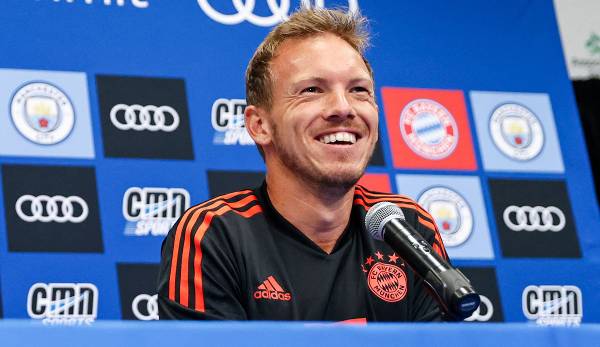 After the departure of Robert Lewandowski, it is apparently clear who will take over as third captain at Bayern Munich. In the Supercup, FCB has to do without a new signing. Here you can find all the news and rumors about FC Bayern.

For even more news and rumors about FC Bayern this way!

Joshua Kimmich will apparently be the third captain at FC Bayern Munich and thus the successor to Robert Lewandowski, who held this office until his move to FC Barcelona. That reports the picture. The 27-year-old is in the captain’s ranking behind Manuel Neuer and Thomas Müller.

Kimmich has been part of the team council since 2019, and coach Julian Nagelsmann has now promoted him to the trio of captains. The coach wanted to clarify the personal details before Bayern’s first competitive game on Saturday in the Supercup against Leipzig (from 8.30 p.m. in LIVETICKER).

As early as 2020, the then CEO of FCB Karl-Heinz Rummenigge was certain “that one day Kimmich will become our captain. He embodies that on and off the pitch.” The German national player switched from VfB Stuttgart to FC Bayern in 2015, only Müller (since 2000) and Neuer (2011) have been with the club longer.

Bayern coach Julian Nagelsmann apparently has to do without Mathys Tel in the Supercup against Leipzig. According to information from picture the 28.5 million euro new signing has not yet received a playing license.

The club is still waiting for Uefa’s approval, but the responsible association committee only meets every 14 days. The transfer of the 17-year-old Sturm jewel from Stade Rennes to the German record champions only became official on Tuesday, so he still has to wait for his competitive debut in FCB dress.

As the report goes on to say, the Munich team hope that Tel will be available for the Bundesliga opener in a week against Frankfurt (Friday, August 5th). He starts his Bayern career with a lot of praise, Nagelsmann recently said he could imagine the Frenchman scoring 40 goals in one season over the course of his career. “But if he scores ten goals this season, we’ll all be happy.”

Bastian Schweinsteiger drew a balanced conclusion about the move from Lewandowski to FC Barcelona. “It’s okay that he’s with Barcelona now. Bayern Munich has also had its success. Both sides have benefited,” said the 37-year-old Crown newspaper.

The former Bayern star is certain that if FC Bayern had refused the Pole’s request for a change, Munich would have been at a disadvantage. Despite some prominent newcomers, he doesn’t see Barca as a top team: “Barca is still in transition and after last season you have to wait and see. But with Robert up front, I’m sure they’ll score a few goals.”

In addition to Lewy’s departure, Schweinsteiger also classified other transfer rumors in the interview. Regarding a potential change from Konrad Laimer, in which FCB is said to be very interested, he said: “I do believe that there is something to it. He has developed very well. He is a player who works incredibly hard. […] He would be a godsend for any team.”