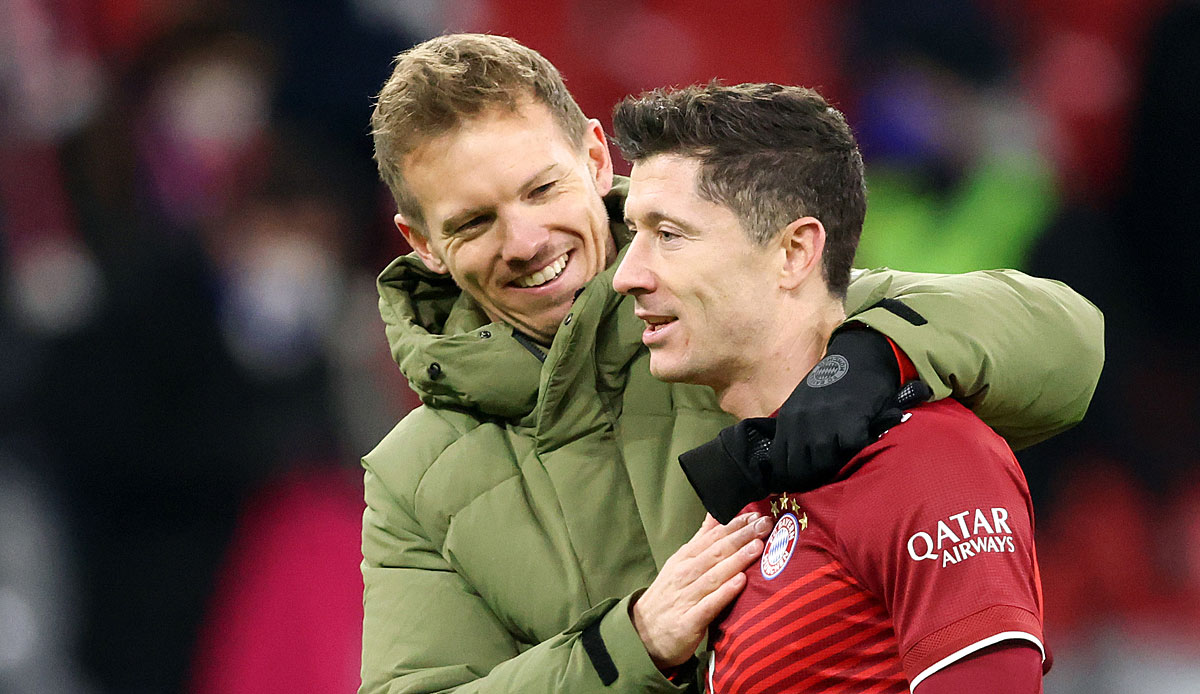 Bayern coach Julian Nagelsmann wants to calm things down in the discussion about Robert Lewandowski’s departure. After the first title of the season, the FCB coach once again raved about a new signing. He also highlighted a player in the spectacular win against Leipzig. News and rumors about the people of Munich can be found here.

The departure of Robert Lewandowski from Munich was anything but smooth, recently the Pole and Sport Director Hasan Salihamidzic had another heated exchange. Bayern coach Julian Nagelsmann, on the other hand, struck up a conciliatory tone: “He played very successfully here for eight years – with an incredible number of goals even during my tenure. So you don’t have to step down, you have to be eternally grateful to him,” he said after winning the Supercup sky.

Nevertheless, Nagelsmann wanted to talk to his ex-striker again about the events surrounding Lewandowski’s move to Barcelona. “I’ll see him again on Tuesday, then I’ll ask him,” he said, but at the same time made it clear that he wasn’t involved in all the talks anyway and therefore didn’t have a complete picture of how the negotiations were going.

Regarding Lewandowski’s most recent statement, in a ESPN-Interview accused some Bayern officials of having spread “bullshit” about him, Nagelsmann said: “I recently gave two or three interviews in English, where there were one or two statements that sounded different in the mother tongue. ” He therefore assumes that “the Lewy statement wasn’t that bad. I also know what the media make of my statements.”

Salihamidzic reacted less relaxed to the said interview: “My father taught me that when you leave, you never close the door with your butt. Robert is well on the way to doing exactly that. I can’t understand it at all. ” Lewandowski wants to say goodbye again in Munich next week, “we’ll talk about it again. It’s not up to us, we’ve done things very well. It’s just on the other side.”

Bayern coach Julian Nagelsmann highly praised star access Sadio Mane after his competitive debut including a goal. Mane is “simply a humble, down-to-earth and outstanding player who defends very well, works hard and pushes the boys in the dressing room,” said Nagelsmann after the 5-3 win against RB Leipzig.

Nagelsmann had called Mane, who had come from Liverpool, as the only newcomer to the starting XI. The Senegalese thanked the coach with the goal to make it 2-0 (31st). “He’s doing us extremely well. He scored two nice goals, which unfortunately were both offside,” said Nagelsmann: “He has outstanding quality and is an outstanding guy.”

Meanwhile, Nagelsmann also highlighted the performance of national player Jamal Musiala, who shone with a goal (14th) and an assist. “You can emphasize Jamal, incredibly good,” said Nagelsmann on Sat1 about the 19-year-old, who was substituted after 60 minutes: “Unfortunately we have to get him down. That was world class, I think.” In this form he was “an indispensable part of the team”.

The Bayern coach also pointed out that such a performance by the 19-year-old had already been suggested. “He had excellent preparation and this performance was a reflection of that preparation,” stressed Nagelsmann.

In a turbulent game, FC Bayern secured their first title of the season. FCB got off to a brilliant start in the 5-3 Supercup final against hosts Leipzig, but made it a little exciting in the end.

Here is the analysis of the party.

Here you will find the individual reviews of all actors.

Here are the best reactions from the web.