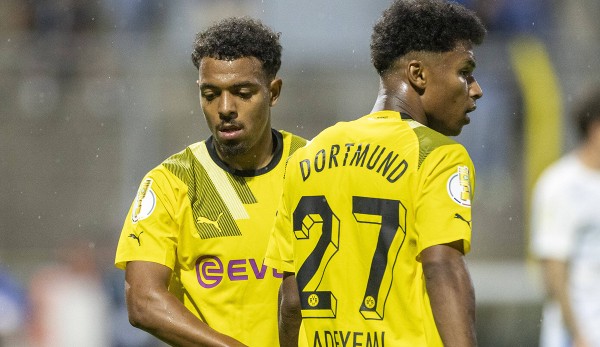 Borussia Dortmund paid 30 million euros for Karim Adeyemi last summer. However, the 20-year-old has so far disappointed at BVB. An important half-year is now ahead for him.

Two goals from Donyell Malen, one from Karim Adeyemi – it’s preparation time again at Borussia Dortmund, scoffers could say. In the 5-1 friendly win against Fortuna Düsseldorf in the training camp in Spain, the two BVB problem children did what they had found difficult in everyday competitive play: Malen and Adeyemi have only scored one and two goals there in the current season.

From this alone it can be seen that an important half-year is imminent for both professionals, for whom Dortmund each shelled out 30 million euros – as well as for the entire club, which in sixth place in the Bundesliga and extremely mixed performances acted far from their own claim.

It therefore fits into the picture that the table football recently wrote that Malen and Adeyemi, among others, could find themselves in the stands after their modest performances in recent months and in view of the replenished BVB squad. What speaks against it is the consistency that Borussia only manages in one area: In terms of injuries, no Bundesliga club has been more shaken than Dortmund in the past two years.

So it’s quite possible that Malen and Adeyemi won’t be threatened in the end, because the Westphalians will soon be missing enough players again so that both of them will at least find their way into the squad. For Adeyemi in particular, it could prove beneficial to have Malen as a cautionary tale.

The Dutchman, who is at home on the left offensive wing and thus on Adeyemi’s opposite side, owed a lot in his second season at BVB. Malen has already received unequivocal announcements from those responsible in Dortmund, but this has not increased his offensive power. The preparation and the start of the season in the cup at 1860 Munich were promising, but then the “old”, harmless signs of the previous season showed up again.

Adeyemi also contributed a goal in the 3-0 win against the Löwen at the end of July in his first competitive BVB game, but he hardly provided any further highlights. “I’m by no means satisfied with the performance I’ve shown so far in Dortmund!” That was his conclusion to the tz. For the new year he has “firmly resolved to finally get off to a good start at BVB and to help the team with my qualities”.

It is undisputed that these would do the Dortmund game more than good. Adeyemi’s greatest weapon is of course his speed, at 35.53 km/h he is – ahead of Malen – the fastest player at BVB. But he is also able to create moments of surprise, to resolve one-on-one duels or to prepare the final pass. He showed all of that in Salzburg, where he also impressed with a good finish.

In order to have this influence at BVB, to finally get consistency in his performances, Adeyemi has to play more seriously and “be even more diligent”, as Hansi Flick put it. Adeyemi still relies too much on his talent for the national coach, which is an alarming statement for a player at this level and with these ambitions.

But Flick is simply right if you look at the previous appearances of the soon to be 21-year-old in Dortmund. Adeyemi revealed too many deficiencies in the game with and especially against the ball. He sometimes seemed inattentive, dealt too sloppily with the ball and sometimes lacked the right body tension. Too often he made the wrong decisions around the opposing box and was too easily overcome physically by his opponents.

Above all, however, Adeyemi – and this also applies to Malen – has to internalize even more that in his position, too, ways to the defensive and sufficient aggressiveness in duels are required. Here the left foot is still far too inexperienced to work and rarely looks for direct duels.

He therefore “didn’t expect” to be nominated for the World Cup – “because I simply haven’t shown what I can do at Borussia Dortmund in the last few months,” said Adeyemi, who also described himself as very self-critical. He wasn’t used in Qatar and the competition in Dortmund is now fiercer than it has ever been this season.

Giovanni Reyna and Jamie Bynoe-Gittens, who were injured for a long time, are available for the two offensive wings, with the latter in particular likely to be a tough challenge for Adeyemi and Malen. Coach Edin Terzic Marco Reus, Julian Brandt, Thorgan Hazard and now also Sebastién Haller are available for the offensive – the expensive duo is therefore urgently required from now on.

Adeyemi may have advanced the mere experience at the World Cup even without a minute of play. There he was enthusiastic about the highly decorated Thomas Müller, who gave his all in training “as if he had never won a title”.

From this, Adeyemi derived a drive for himself: “In the ‘autumn’ of my career I want to be like Thomas Müller,” he said. Certainly a noble goal, but it would be best for BVB and him if he were to be a bit like Thomas Müller in the near future.

BVB: Karim Adeyemi and his performance data at Borussia Dortmund