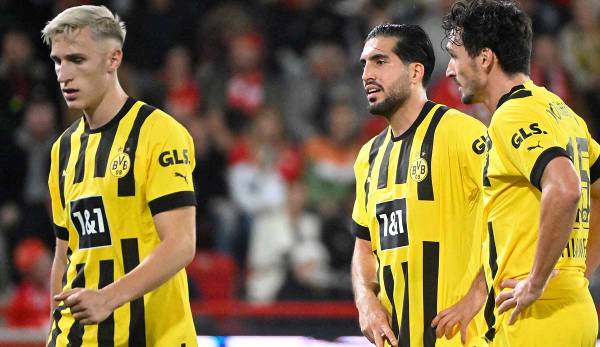 After the much-discussed penalty scene in the game between Eintracht Frankfurt and BVB, “culprit” Karim Adeyemi shared his point of view. Nico Schlotterbeck supported Mats Hummels’ criticism and commented on the upcoming World Cup in Qatar. All news and rumors about Borussia Dortmund.

BVB professional Karim Adeyemi caused irritation with his very own view of the scene between him and Jesper Lindström, which was subsequently classified as a wrong decision.

“I was at the back first, then he was in front of me. It wasn’t a foul for me. So I felt like I was body to body with him. That’s why I thought the referee was right,” Adeyemi commented sports1 his clear push against Frankfurt. Referee Sascha Stegemann didn’t decide on a penalty, but he didn’t get any information from the video assistant either. Afterwards, Stegemann spoke of a wrong decision.

The anger at Eintracht Frankfurt was correspondingly large. SBU boss Markus Krösche scolded the VAR in clear words (“Stamp the basement”). Adeyemi only had a tired smile for the frustration of Frankfurt. “That’s their business. We have three points, I don’t really care,” said the attacker.

Thanks to goals from Julian Brandt and Jude Bellingham, Dortmund won 2-1 in Frankfurt. The possible penalty just before the break when the score was 1-1 could have given the game a different twist.

With regard to a possible boycott on his part, the 22-year-old is in a certain dilemma. “As an athlete, the biggest goal is to take part in a World Cup,” explained the central defender. “I’m 22, this is my first World Cup, that’s what you dream of as a little boy. Then to say I’m not going there – it’s hard to imagine.”

Schlotterbeck added: “When the World Cup was awarded to Qatar, I was very young. I had no influence on anything. Of course it’s a dilemma.” If he is called up to the World Cup squad by national coach Hansi Flick, he will give so much for his country “that the people in Germany are just happy”. He was “really in the mood for the World Cup, although there are these differences with Qatar”.

Nico Schlotterbeck has praised his defensive colleague Mats Hummels for his public criticism after the games against Sevilla in the Champions League and Union Berlin in the Bundesliga.

“Everything helps. Mats addressed it publicly, but he also addressed it internally, then everything is fine. We all understood what Mats said, and he’s right too. We’ve now accepted that.” said Schlotterbeck in the ZDF sports studio.

Hummels appealed to his teammates, especially after the 2-0 defeat in Berlin: “Sometimes a simple 20-meter back pass is better, even if it doesn’t appear on social media afterwards.” The central defender had already stressed after the 1-1 draw against Sevilla that football doesn’t always have to be sexy. “Successful football is not heel, tip, one, two, three at five meters.”

According to Schlotterbeck, the words had an effect: “The game after that we won 5-0 against Stuttgart, after that we also won in Hanover. That’s why it was perhaps quite good that he addressed it, because we haven’t lost since then.”

After the 2-1 victory in Frankfurt, Hummels explained that he had already made criticism internally on several occasions, but had recently also consciously expressed himself publicly. “I would say that something was continued there,” said Hummels sky. “There’s no way I would say my words made a 180-degree turn. I didn’t expect that either.”