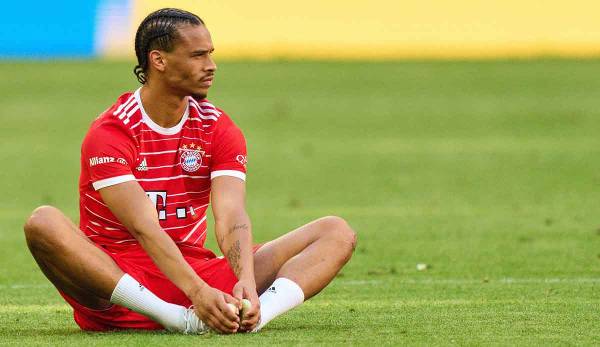 Probably no Bayern Munich player polarizes more than Leroy Sane. Ahead of his third season at the club, the 26-year-old attacker with the puzzling fluctuations in performance has reasons for both hope and concern.

If you talk to Julian Nagelsmann about Leroy Sane, it’s about what the coach thinks is the best footballer on his team. And that’s supposed to mean something with this highly talented selection that FC Bayern Munich keeps. As much as Nagelsmann is enthusiastic about Sane’s football skills, his fluctuations in performance are inexplicable to him. In that respect, the coach feels the same as the fans.

Something mysterious surrounds Sane. In addition to his extravagant, but rarely used footballing skills, this is certainly due to his extravagant demeanor and inscrutable body language. Probably no FC Bayern player polarized, interested more in the recent past than Sane. Nagelsmann was asked about no one more often in his first season as Bayern coach than about Sane.

When will Sane become the constant performer he was when he was signed by Manchester City for €60m two years ago? Will he still be there by the end of his contract in 2025? Why did he shine for weeks last autumn, not only when he had possession of the ball, but also against the ball? Why did he seem so lethargic again in the spring?

There are no answers, only guesses. Maybe the whistles of his own fans spurred him on in late summer, which is said to have touched him emotionally. Perhaps he was later hampered by the week-long absence of Alphonso Davies, with whom he had combined so well on the left in the first half of the season. He also suffered from muscular problems in the second half of the season.

Because of his fabulous talent, Sane is generally looked at very closely, more is expected of him than of others. Statistically, his yield is good: in 90 competitive games for FC Bayern, Sane has scored 52 points. Only the emigrated Robert Lewandowski and Thomas Müller were more successful in this period, Serge Gnabry (46) and Kingsley Coman (37) are behind them.

FC Bayern Munich: The offensive players since Sane’s arrival in 2020

FC Bayern and the competition on the offensive

In the 5:3 victory in the Supercup against RB Leipzig, Sane scored his first goal of the new season in added time. It was good news in a game that was rather bad for Sane: At the first serious indicator, he was only on the bench at the beginning and was used in the closing stages as the last of the prominent offensive players.

In Nagelsmann’s 4-2-2-2 system, Jamal Musiala and Thomas Müller started behind flexible strikers Sadio Mane and Serge Gnabry. The 19-year-old Musiala was involved in three goals, showed a great pirouette and was then awarded the title “world class” by Nagelsmann: “If he plays like that, it’s impossible to imagine the team without him.”

For Sane, these words from the coach should be an alarm signal: Musiala’s position as left playmaker against Leipzig would actually be the one that suits Sane’s abilities the most in this system. Even with the 3-5-2 system, which has been increasingly studied recently, Sane is in direct competition with Musiala (and ultimately also Müller).

Unlike Coman, Sane is too offensive for the role of rail player, and unlike Gnabry or Mane, he lacks the power for the front row. The classic wing positions that have been established at FC Bayern for many years no longer exist in these two formations. That would be particularly problematic for the pure winger Coman, but also for Sane, who comes closest to him in terms of playing style.

Sane has been in a negative spiral since his performance drop last winter. First the disappointing second half of the season, then a weak international match phase in June. “It’s not an easy situation for him. We help him, but of course he has to help himself,” said DFB director Oliver Bierhoff. “In the end you have to fight your way out of it as a player.”

Fighting out isn’t really Sane’s thing. With him, positivity and negativity seem to multiply equally, so reversal is difficult when multiplied. If things go well, Sane can infect the whole team with his laughter. If things go badly, he can pull them down with his attitude. “Sometimes it annoys me when he doesn’t take one or the other thing so seriously in training,” said his teammate Joshua Kimmich.

A report by table football According to FC Bayern, Sane should also receive special treatment in the future because of these character traits. Less pressure, more freedom. Both in training and in speaking. At the same time, with the arrival of superstars Sadio Mane and Matthijs de Ligt, public interest in Sane should dwindle somewhat, which he could well benefit from. He doesn’t want to be seen as a “superstar” or “glamor figure” anyway, as Sane recently stated.

Julian Nagelsmann on Leroy Sane: “We can do it”

For Sane, it’s not just about a regular place at FC Bayern, but also with the national team during the World Cup in Qatar, which begins in mid-November. “We all expect him to bang on the pitch, explode and step on the gas,” said sporting director Hasan Salihamidzic for the new season.

The preparation so far has been rather disappointing. Although Sane was in the starting XI in the two friendlies against DC United (6-2) and Manchester City (0-1), he did not recommend himself over the long term and was not directly involved in any goals. This was followed by the bank place, including a later substitution in the Supercup against Leipzig.

In the subsequent roar of praise for Musiala, something went missing that Sane not only scored late, but generally brought momentum. “That’s exactly how his game looks good when he comes onto the pitch so emotionally, almost cheekily and resolutely,” said Salihamidzic. Nagelsmann, on the other hand, didn’t want to “talk so much about Leroy” this time, he only said: “I really like him. He’s an incredible footballer. We can do it.”