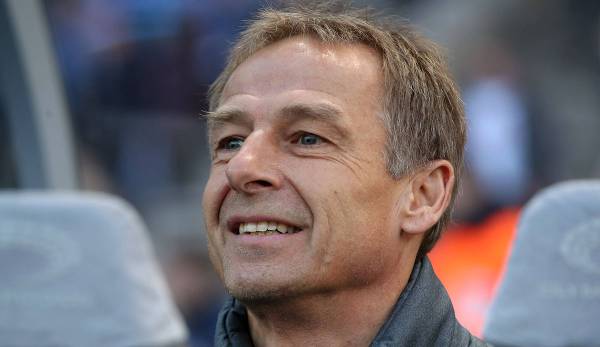 Former national coach and FCB player Jürgen Klinsmann speaks to SPOX and GOAL about the importance of the departures of Robert Lewandowski and Erling Haaland for the Bundesliga and for FC Bayern and BVB respectively.

In addition, the former national coach of the USA supports Augsburg’s record transfer Ricardo Pepi and congratulates Malik Tillman on his move to Glasgow Rangers.

… the Bundesliga without Erling Haaland and Robert Lewandowski: “It’s sad because of course every league wants to have the best players in the world, especially the top five leagues in Europe. That’s their ambition. There’s a race for talent in those five leagues and that’s how they compete with each other, and each one Sometimes when a player leaves, it makes you sad for a moment, because who doesn’t want Lewandowski, who doesn’t want Haaland? How often has it been talked about in recent years? ‘We have to keep them, we have to find a way somehow think they’ll stay in Germany’, but that’s life. It’s the competition that’s out there. There’s tremendous competition in the European market for super talent, and of course that’s two super talents. But in the end it is It’s understandable for clubs to cave in and try to create the best possible financial scenario for themselves in order to attract the next wave of talent. This will always continue.”

… FC Bayern: “Robert Lewandowski is an absolutely world-class player who has done so much for Bayern Munich and won so many titles and trophies. But at the same time you have to thank him and wish him luck for what is probably the final chapter of his career. Given this opportunity, I feel the The way they ended up solving it very positively, they got a very decent transfer fee and obviously they’ve already moved in the market because Mane and other talent have come in. De Ligt is one of them, Gravenberch is one of them and that’s okay. It’s okay, even if you’d like to see him play in the Bundesliga.”

…Erling Haaland: “We all knew that day was coming because in the last three years he’s just exploded. This boy is very special and when they get the really big numbers then the big clubs come too. It’s normal that “You have to let him go. I’m curious to see how he will fit into Pep Guardiola’s style at Man City. At the same time, Dortmund have also developed and tried to solve this position in the best possible way.”

Klinsmann: Lewandowski? “Definitely one of the greatest legends”

… Robert Lewandowski’s farewell and his relationship with Bayern fans: “I think there’s a bit of sadness in the short term and maybe a bit of awareness because there was still hope that he would stay and not be swapped out. I think you let the grass grow for a couple of months and then he’ll all be Bayern Munich fans, the club, everyone involved will forever be grateful for what he has done. He will definitely be one of the greatest legends in the history of the club, one of the most exciting, one of the most extraordinary players. There will be an opportunity that he comes back. Maybe it’s a friendly or maybe even a European Cup match or whatever where he’ll get an exceptional reception from the Bayern fans when that game or that moment comes in. For a few weeks it might be a little bit bitter give to some fans but that will definitely pass. In the long run he will be remembered as one of the greatest.”

… Bavaria’s summer transfers: “I think they did that very well. They brought Mane in and I was really impressed. I thought he was in the right place with Jurgen Klopp and he’s done fantastic, absolutely fantastic, at Liverpool and also at of the national team and we will see him in Qatar in November and December. So getting him from Liverpool is a big deal, a really big deal. But then they added another important building block in De Ligt, a very young one, promising centre-back who is still growing at 22. He’s already a leader. It’s a big deal. It’s huge. And knowing Bayern Munich they’re always looking. They’re always looking at the market, and if the opportunity arises to get one or two more very important pieces to their puzzle, they will do it Don’t be surprised if they snag one of their main competitors, i Because that’s what they’ve traditionally done for the past 30-40 years. But they have already stocked up very well on the transfer market and every additional player who comes now is just another sign of quality.”

… the business model of BVB: “I’ve always liked Haller. I was sad when he went to West Ham. But David Moyes obviously has a very, very good eye for players and talent and he did it very well. But I think it’s not just that the player material that needs to improve to be able to compete with Bayern and make it very difficult for Bayern in the next title race.It’s probably also a small culture shift that they need to discuss internally to become hungrier and more vicious, more driving, more consistent in what they do. Because the quality is there, but it’s the consistency throughout the year that makes the difference. They’re always there, and then in February or March Bayern start to outperform the competition and that are the moments when you have to catch that wave. You can keep up, but you have to be very, very consistent. Hopefully that’s the core message in Dortmund: You can’t take a game too lightly, otherwise you’ll be suddenly behind ten points again. Just hang in there and give them a real fight.”

Klinsmann has faith in Pepi and praises Tillman

… Ricardo Pepi from FC Augsburg: “You just have to keep learning. He threw himself in at the deep end and took the risk to go overseas and prove himself and I think he did well, although of course he didn’t score that many goals like he would have liked to do, especially as a striker you want to score goals week in and week out, but all he has to do is keep pushing, keep working hard, convince his new coaching staff that he it deserves to play from the start and then gradually gain more confidence in his game.Hopefully they give him more chances for that.He knew it’s very difficult for a striker to go to Augsburg because it is not that he can go into a game like a Lewandowski and say, ‘I get four or five chances and I converted three of the five.’ There were a lot of games where he didn’t have a single chance to score! That’s a team , usually, trad itional, fighting against relegation. It’s very difficult for a striker to make a good impression, to score goals, and that’s your calling card, so to speak, the number of goals. It’s the business card you show the national team coach to say ‘Hey, I’m here, I’m good!’. So I hope he gets more chances to score, but it’s about continuing to learn, to keep fighting and to get through this phase. The transition from America to abroad is a big one. Not just on the pitch, with a new group of players, with a new coaching staff. It’s also about things off the field. Living in Augsburg is different from Dallas or LA or New York. It’s a very brave step that he took. Just keep calm and believe in yourself.”

…on the situation of John Anthony Brooks in the US national team: “I’ve always had a lot of praise for Brooks because he’s a great character, a very good professional and he’s proven his qualities over so many years. But at the end of the day, as the national coach, you have to make a decision. You have your own ideas and you want to make them your own. So I can understand Gregg (Berhalter, ed.) I’m sad for John because I think he’s a very, very good central defender and above all his international experience is excellent. “He knows what to expect at a World Cup. He knows how to play against different teams from all over the world with different mentalities and characters. It’s not just about the technical side of the game. It’s also about who you’re up against You play Iran, you play Wales and England, of course, and he’s played I don’t know how many games against English or British opponents, he has enormous experience G. But like I said, it’s Gregg’s choice and John has to respect that. But I hope for him that he is not completely forgotten. Who knows, one or two injuries and suddenly he’s back on the scene and he flies to Doha and we’ll see him there!”

… Malik Tillman, who switched from FC Bayern to Glasgow Rangers: “You just wish that every extremely talented player like Tillman, like Julian (Green, ed.) years ago, gets the chance to prove himself in the club environment. Tillman’s move to Rangers is a big step because not only does he get playing time there straight away but he also plays in a very strong league, especially physically. Scotland is a battleground and then he also has the opportunity to play in the European competitions. Rangers? That’s a really big deal so if he has a series of games and his performances are consistent then he can learn very quickly and has a chance to grow which would benefit him enormously in terms of Qatar and I think it’s a pretty cool situation for him.”