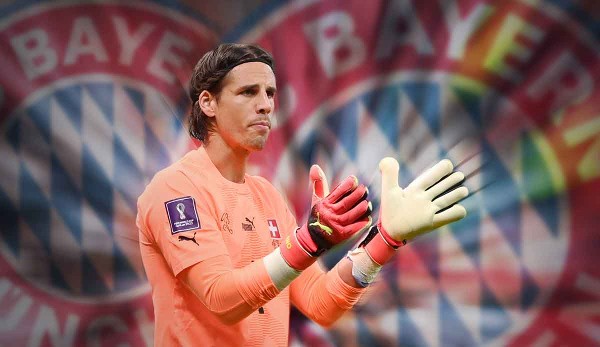 FC Bayern Munich has to go to cup winners RB Leipzig when the Bundesliga restarts. Newcomer Yann Sommer is about to make his debut in goal. Thomas Müller only has one place on the bench. The expected lineup.

Yann Sommer landed in Munich on Wednesday, and the Swiss was already training with his new teammates on Säbener Straße on Thursday afternoon – even before FC Bayern officially announced the goalkeeper’s signing.

In the Bundesliga cracker at RB Leipzig in the evening (8.30 p.m. in the live ticker), the 34-year-old, who was brought in to represent Manuel Neuer, who was out until the end of the season, should already be between the posts.

Otherwise, there are still one or two question marks regarding Julian Nagelsmann’s starting eleven. “I’ve decided on six out of eleven positions,” said the FC Bayern coach at the press conference before the game. And so Bayern could play in Leipzig.

The ink under Sommer’s contract in Munich isn’t quite dry yet, so the Swiss will probably be between the posts for the first time in a Bayern jersey. Finally, Nagelsmann emphasized on Wednesday that an experienced keeper does not need a long period of adjustment, maybe “15 minutes,” said the FCB coach. “It’s not rocket science that you have to study for six months.”

The Frenchman recently had public thoughts of emigration, but is currently more important than ever in defense due to the numerous absences. Even if he would much rather play in central defence, Pavard is primarily in demand as a right-back due to the absence of Noussair Mazraoui (pericarditis after corona infection).

Before the World Cup break, the central defender was on the field in 23 of Bayern’s 24 competitive games. Even when he meets his former club again, the Frenchman is naturally set in Bayern’s center of defence. If Upamecano builds on his sovereign performances of the previous season, his status is unlikely to change anytime soon – especially since compatriot Lucas Hernández will be absent until the end of the season due to a cruciate ligament rupture.

Together with Upamecano, the new summer signing has become firmly entrenched in central defence. And de Ligt is said to be coming back from the World Cup a little more rested, after all the Dutch international only played 90 minutes in the opening game against Senegal, in the following four games only a one-minute short game jumped out. De Ligt returned from training camp with his ankle bandaged but returned to full training earlier this week.

In Qatar, Davies made history with Canada’s first World Cup goal. At Bayern, the sprinting winger is now back on the left in the back four. The veteran Daley Blind, who is committed as a backup, initially only has one place on the bench.

There was a question mark behind his commitment until the very end. In the training camp, the midfielder had to train moderately at times. Goretzka was also not involved in the only test match in the winter preparations against Salzburg (4: 4) a week ago. “Leon still feels something, but it’s nothing dangerous,” said Nagelsmann in the run-up to the Leipzig game.

The bitter World Cup is over, looking ahead: That also applies to Kimmich. At Bayern, the 27-year-old is now back in demand as a leader in midfield, especially on Friday at his old place of work in Leipzig.

With a goal worth seeing in the test against Leipzig, Sané was able to collect plus points. The reward: The national player should play from the start in Leipzig, even if he had to take a break from training at the beginning of the week.

The 19-year-old was one of the few bright spots in the German World Cup defeat in Qatar. Musiala is also the man for the special moments at Bayern, so his place as a source of ideas behind the strikers is set.

So far it has not been the Frenchman’s season, who was thrown back by a hamstring tear at the start of the season and then had to queue at the back. In the test against Salzburg, Coman was now preferred to Serge Gnabry on the left wing. A pointer in the direction of the Leipzig game.

Before the World Cup break, the Cameroonian had repeatedly demonstrated his clipping qualities in the center of the attack. Choupo-Moting is up to date with eleven goals in 16 appearances. He missed the friendly against Salzburg due to illness, but he should be back in Leipzig. “Choupo is on a very good run. I don’t see any reason not to let him start,” Nagelsmann confirmed.

The dictum “Müller always plays” may become “Müller never plays”. Nagelsmann emphasized the value of the 33-year-old in detail on Wednesday, but he currently does not have a place in the starting eleven, as youngster Musiala is clearly ahead in tenth position. And up front, Choupo-Moting is more the classic nine than Müller. “He’s an extremely important player for me. We’re very much in exchange. He’s smart enough to see that Choupo-Moting has done very well, but he’s also smart enough to know he’s in several positions is world class,” said Nagelsmann about Müller.

In addition to Müller, Nagelsmann has other strong jokers up his sleeve on the bench in Serge Gnabry and Mathys Tel. Tel made an exclamation mark with a goal and an assist against Salzburg. Arjon Ibrahimovic was also among the goalscorers against Salzburg and was recently promoted to the professional level. “Ari has developed very well. His activity was outstanding, especially in the friendly. I’m glad he signed the contract,” Nagelsmann praised the 17-year-old attacking midfielder, who is still waiting for his Bundesliga debut.

Timo Werner missed the World Cup due to a syndesmosis tear, and the Leipzig attacker is fit again just in time for the start of the Bundesliga. And since offensive star Christopher Nkunku will be missing for a long time due to a torn outer ligament, Werner’s comeback is all the more important for RB. In goal, the question of who will replace the injured Peter Gulacsi has not yet been fully resolved, as Janis Blaswich recently had to sit out with a calf problem. Another replacement would be Örjan Nyland. There was still a question mark over ex-Dortmunder Abdou Diallo, who was injured in the dress rehearsal against Mlada Boleslav (4-0).