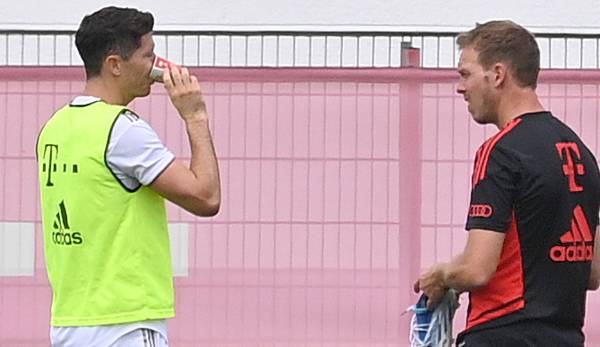 Robert Lewandowski was the last to shuffle listlessly out of the changing room and scratched his right ear in boredom. The world footballer, who was willing to emigrate, did the job according to the rules when he returned to the Munich training ground on Wednesday – he has long had his thoughts on FC Barcelona.

But the heavily indebted Catalan top club has probably still not made an offer for the star striker that meets the wishes of the Bayern bosses: CEO Oliver Kahn and Co. are reported to be offering 50 million plus bonuses – ten million more than previously offered.

And so Lewandowski had to go to Säbener Straße again after the performance tests on Tuesday. At 9:06 a.m. he drove up in his red company car – six minutes late. At 10.31 a.m. “Lewa” trotted onto the square.

The fact that he had to put on Bayern’s (white away) jersey again for a photo shoot didn’t improve his mood. He refused the penalty push-ups after a lost game, and in the final sprints the Pole demonstratively kept his distance from his colleagues.

He would much rather have trained at Barca, who also completed a session at the same time. But the Catalans initially made another deal perfect: According to information from SPOX and GOAL, the Brazilian winger Raphinha comes from Leeds United for 65 million euros plus bonuses of twelve million. In order to be able to pay Lewandowski, President Joan Laporta needs the millions from the rights sale that are expected to flow in the coming week.

So will there still be a confrontation between Lewandowski and the angry fans at the Bayern team presentation on Saturday in the Allianz Arena? Nobody wants that. Lewandowski should therefore even have the Paris St. Germain emergency option checked as Plan B.

Even his wife Anna seems to have doubts. On Instagram, when asked if the family would be moving to Barcelona soon, she replied: “I’d like to know that too.”

For Leon Goretzka, the German record champion is hardly conceivable without his long-standing striker. “I’ve actually only known FC Bayern with a centre-forward, since the time of the Bundesliga classics on TV,” said the national player of Sport Bild: “The club has always stood for football with a clear number 9, sometimes even with two centre-forwards .”

However, the offensive with newcomer Sadio Mane is “absolutely world class” even without Lewandowski – unlike in the center of defence, which is why Bayern made an initial offer for Matthijs de Ligt. It is said to be 60 million euros plus 10 million bonuses, but Juventus Turin has not yet been completely satisfied.

And RB Leipzig is also reluctant to give up the “pressing machine” Konrad Laimer wanted by Bayern coach Julian Nagelsmann. The probability that the midfielder “stays with us in the coming season,” said RB boss Oliver Mintzlaff, is “significantly higher” than “that he plays somewhere else.”

From Bayern’s point of view, that cannot be said about Robert Lewandowski.