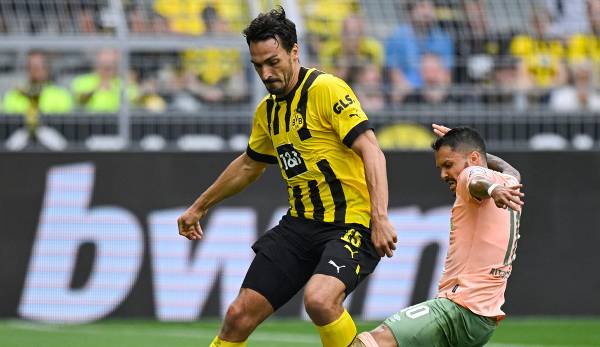 At Borussia Dortmund, the mentality debate flared up again after the given win against Werder Bremen. Record national player Lothar Matthäus is hard on the leading players of BVB. For ex-professional Kevin Großkreutz there is a reunion with his former club. And there are signs of a return soon for some ailing BVB players. Here you can find news and rumors about BVB.

Record international player Lothar Matthäus did not give a good hair to the leading players of Borussia Dortmund after BVB’s 2:3 defeat against Werder Bremen. “At Dortmund there are many leaders on the pitch when things are going well. When there are problems, everyone hides,” wrote Matthäus in his sky-Column.

The team around BVB captain Marco Reus had led 2-0 against the newly promoted team up to the 89th minute on Saturday and then scored three more goals. Matthäus also named a role model in terms of recruitment: new signing Nico Schlotterbeck. “I would like to see more Schlotterbecks on this team,” wrote Matthäus.

If you lead 2-0 in front of 89,000 spectators up to the 89th minute, “you should never in your life concede three more goals so miserably”, criticized Matthäus. “Nobody understands that there is no one there who makes sure that after Bremen have scored a goal, you put eight or nine men in the back and just dirty save the victory over time. Leading players excel in precisely such situations. When it gets tight, when it’s tight. But once again there was nobody.”

“Maybe it was just a slip, because otherwise the championship will be decided even faster than in previous years,” added Matthäus and at the same time praised FC Bayern, who got off to the best possible start.

BVB coach Edin Terzic can most likely count on Mahmoud Dahoud and Mats Hummels, who were replaced against Bremen, for the away game at Hertha BSC next Saturday.

As the Ruhr news report, the Dou should be fit again in time. Dahoud dislocated his shoulder on Saturday and had to be substituted early, as did Hummels, who was struggling with a muscular problem. Nico Schlotterbeck, who twisted his ankle in a duel with Bremen, should also be operational.

Karim Adeyemi, who missed the last two games due to a bruised foot, could also be an option again next Saturday in Berlin. For offensive colleague Donyell Malen, however, a mission against Hertha is probably too early.

For 2014 world champion Kevin Grosskreutz, there is a short-term reunion with his former club. Großkreutz meets Borussia Dortmund’s U23s in a friendly with TuS Bövinghausen on Tuesday. That’s what they report Ruhr news. The game will take place at 6 p.m. at the BVB training ground in Brackel, but spectators are not allowed.

According to the report, Bövinghausen’s last opponent, ASC 09 Aplerbeck, was originally intended as an opponent for Dortmund’s third division team. But after the 3-1 defeat against Bövinghausen on Sunday, the Oberliga team obviously had too many injured players to complain about and therefore canceled the planned test match. Großkreutz’ team stepped in as a replacement at short notice.

The 34-year-old ex-national player played for Borussia Dortmund in the Bundesliga from 2009 to 2015. He has been with TuS Bövinghausen in the Oberliga Westfalen since January 2021.