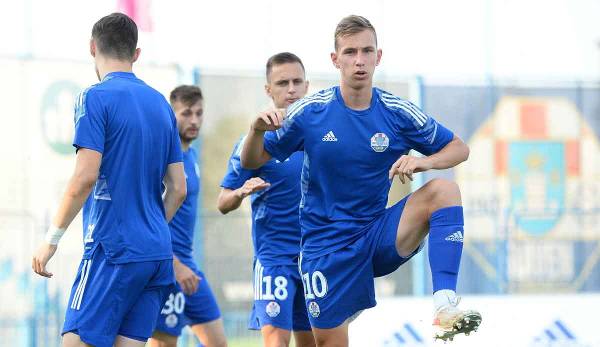 FC Bayern made the signing of Lovro Zvonarek a year ago, and this summer the 17-year-old attacking all-rounder from Croatia is coming to Munich. A lot has happened in the meantime: Among other things, Zvonarek became the youngest captain of a European first division club in history.

Lovro Zvonarek is very familiar with high speeds. Born in the far north of Croatia, he grew up not far from the speedway stronghold of Prelog. When the motorcyclists smashed through the dust, young Zvonarek liked to watch.

“I used to cheer on the drivers at the races,” he recently told the Croatian portal 24 Sata, but he never drove himself. “Speedway is great, but football is number one.” And in this football, Zvonarek has had a career at speedway pace so far.

In May 2021, aged 16, he made his senior debut for Slaven Belupo, the area’s biggest club. Less than a year later, as the undisputed regular player, he was appointed captain. At this point in time, FC Bayern Munich had long since secured the services of the incredibly talented offensive all-rounder. The transfer fee is 1.8 million euros, but can allegedly rise to 4.5 million.

The change will be completed this summer – but what then with the Croatian U17 international? According to information from SPOX and GOAL the reserve in the fourth-rate regional league Bavaria is out of the question, as an established first-league player the level there would not challenge him. A loan deal would be conceivable instead, or actually an opportunity with the professional trainer Julian Nagelsmann, who is known to explicitly promote young talent.

Zvonarek’s first big sponsor was Tomislav Stipic. The German-Croat worked for FC Ingolstadt and Eintracht Frankfurt, among others, before taking over as coach at Slaven Belupo in 2019. Zvonarek quickly caught his eye in the youth department there, and why wait? At 15 Stipic brought him to the professional team.

“He’s incredibly quick at thinking. After training, I always asked myself the same question: ‘He’s 15 and what are his deficits compared to the best players on the team?’ The answer was always: ‘None!'” said Stipic transfermarkt.de. On his second appearance a few days after his 16th birthday, he scored his first goal, replacing Alen Halilovic as the youngest goalscorer in Croatian league history.

Halilovic once switched from Dinamo Zagreb to FC Barcelona, ​​at Zvonarek FC Bayern won the race, also thanks to discoverer Stipic. “This idea came about through my good relationship with FC Bayern and especially with Mr. Jochen Sauer (Campus boss, editor’s note) and then this dynamic developed,” said Stipic. In the spring of 2021, he gave Zvonarek an initial trial session in Munich. FC Bayern wanted him immediately, but the player didn’t want to leave his familiar environment just yet.

“They called again in the summer,” said Zvonarek. “They were persistent and sent a new offer I couldn’t refuse.” The deal: Zvonarek will play for Slaven Belupo for one more season and only then move to Munich. It should be worth it, because in the meantime he made a remarkable development.

Zvonarek had to struggle with injury problems again and again last season. When he was fit, he was always in the starting XI under Stipic’s successor Zoran Zekic.

“He moves very well without the ball. But he always knows what to do with the ball too. He has incredible pass timing, he always plays vertically,” said Zekic SPOX and GOALS.

Zvonarek can be used extremely flexibly. During the season he played in attacking and defensive midfield, on both wings and as a striker. “I feel comfortable in all positions. I really don’t care,” says Zvonarek. Stipic once compared him to Real Madrid’s Luka Modric, the captain of the Croatian national team.

Zvonarek also has experience with pads: In April, at the age of 16 years, eleven months and 16 days, Zekic actually made him captain of Slaven Belupo. “I didn’t do it for fun, I did it because he deserved it,” he says. Incidentally, the former captain Goran Paracki – at 35 years old, more than twice as old – saw it that way too. “He said it’s a fantastic idea,” said Zekic.

According to the current state of research, Zvonarek became the youngest captain of a European first division club in history. So far, this record was held by a certain Kristoffer Ajer from Norway, now 24 and still under contract with FC Brentford. All the famous young captains of Europe’s top clubs were later: Matthijs de Ligt at Ajax Amsterdam at 18, Fernando Torres at Atletico Madrid at 19 and Francesco Totti at AS Roma at 21.

Zvonarek will initially appear without a bandage at FC Bayern, but his claims to leadership will not fail because of communication: he learned German at school and recently took extra lessons.